5 Tips on How to Parent Less Like Lin-Manuel Miranda 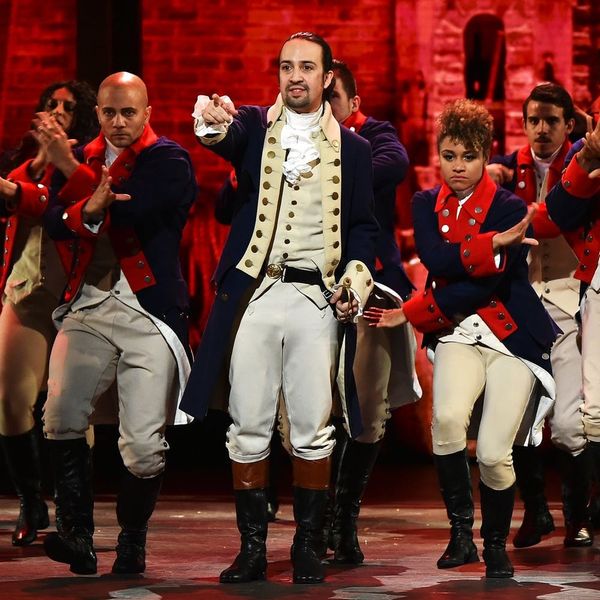 Lin-Manuel Miranda — actor, writer, rapper, Hamilton creator, future Disney star, genius and dad — doesn’t just drop the knowledge on the Broadway stage but in magazine interviews too. A bit ago, he did one with GQ based on the premise that the “key to parenting is a little less parenting.”

In the piece, Miranda looked back at his childhood and paid homage to his mom and dad’s low-key parenting style, which paved the way for him to become the creative force he is today. After such a massive win at the recent Tony Awards (count ’em — 11 Tonys), we feel moved to listen to this man, because his parents apparently did something very very right. Here are five totally easy lessons we can all learn from Miranda (and his folks) on how to parent less and perhaps raise a more creative thinker!

As parents, our plates are full, especially if you’re a working parent. The big thing for us is to be there for all the moments that matter: their big soccer game, the school picnic, cuddling them when they’re sick, making sure they do their homework and reminding them to say their pleases and thank yous. In other words, “don’t sweat the small stuff.” If your child is wearing mismatched socks, still sings “Let It Go” over and over or can’t seem to remember to make their bed, don’t fret. There are much bigger parenting fish that should be fried.

2. The television is not the enemy. “TV is not a bad thing. In a lot of ways, it was my co-parent. But I was never just a passive TV watcher. I was always doing something at the same time, drawing or writing.” — Lin-Manuel Miranda

Many of us (and yes, I mean me too), started out this whole parenting gig thinking, “My child will never watch TV. It’ll rot their brain.” But in reality, as most of us find out, TV is not the devil and can be helpful. Kids can learn from TV, be able to share pop-culture references with friends or can be engaged and inspired by what they’re watching. Speaking of TV, if you haven’t seen Miranda dropping rhymes on Electric Company, do yourself a favor and watch it right now.

3. Don’t nag your kid too much. “Don’t freak out if your kid waits ’til the last minute. There are two kinds of people in this world: Those who do homework on Sunday night and those who do it Monday morning. I was always Monday morning. I wish it were the other way, but that’s just how I’m wired. I need the deadline to function. It takes the pressure to unlock the idea.”— Lin-Manuel Miranda

You do need to respect how your kid is wired. We all operate differently, and there is no manual. While you might be a planner and a get-things-done-ahead-of-time person, your offspring might not have inherited that gene. As long as they eventually get the thing done, that’s what matters. If they don’t, well, then nag away!

4. Allow them to get bored. “Time alone is the gift of self-entertainment — and that is the font of creativity. Because there is nothing better to spur creativity than a blank page or an empty bedroom. I have fond memories of pretending ninjas were going to come into every room of the house and thinking to myself, What is the best move to defend myself? How will I ‘Home Alone’ these ninjas? I was learning to create incredible flights of fancy.” — Lin-Manuel Miranda

It may not be wrapped up in a bow, but boredom is a glorious gift that we can give to our kids. Not only will this give them room to create and use their imaginations, but you are presenting them with the tools to figure out who they are. “Your role as a parent is to prepare children to take their place in society. Being an adult means occupying yourself and filling up your leisure time in a way that will make you happy,” says Lyn Fry, a child psychologist. “If parents spend all their time filling up their child’s spare time, then the child’s never going to learn to do this for themselves.”

5. Hide your tech. “Because of phones, we always have the ability to jump out of ourselves. But unless you learn how to be in your head, you’ll never learn how to create.” — Lin-Manuel Miranda

This totally goes along with the idea that you should let your kids get bored. But even in a situation where boredom isn’t knocking at the door, kids will still reach for your smartphone or the family iPad. It’s just so easy! Don’t let your kids “jump out” too much; they really need to “jump in” and let those synapses spark!

Sunny Chanel
Sunny Chanel is a freelance writer as well as the founder of the whimsical site Wonder and Company. When this proud San Franciscan isn't writing, working on her fixer-upper or doing crafts, she is playing dress up with daughter and planning her next trip to Disneyland.
Parenting
More From Parenting