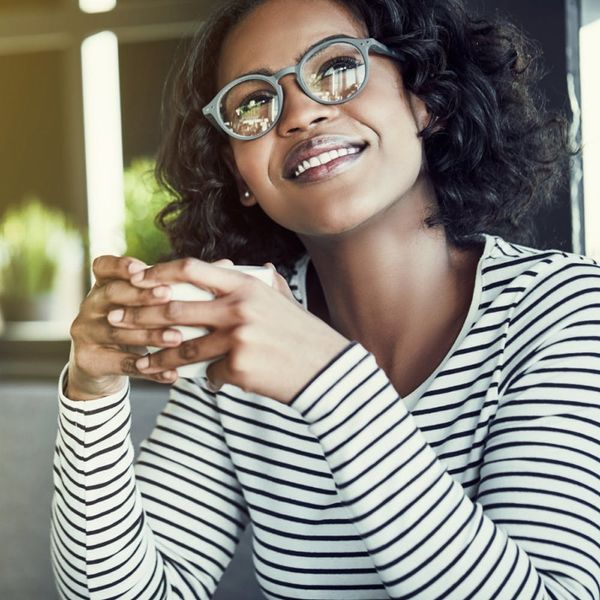 When Cheryl Sutherland found herself at a professional crossroads and unsure of what she wanted to do next, she did what any reasonable person would: She made a list. (And if — like 75 percent of 25- to 33-year-olds — you’ve experienced a quarter-life crisis, we’re willing to bet you’ve probably done the same thing at some point.)

“I had no idea what I wanted to do for work, so I wrote down a bunch of aspects that I wanted,” Sutherland tells us. “I wanted it to be a product, something that I could do on a laptop at the side of the pool, something that helped people [feel] happy and made me happy.” What happened next was what Sutherland calls her “favorite lightbulb moment,” during which she stumbled on the spark that would become PleaseNotes. Today, PleaseNotes offers a range of affirmation-filled products — just like the ones that Sutherland craved during her own period of uncertainty — designed specifically with women of color in mind.

“Right before I actually got the idea, I thought to myself, ‘I wish there were a way I could have affirmations everywhere, like on a sticky note,’ and that’s when it clicked,” Sutherland says. “Angels sang, doves flew, and PleaseNotes was born. It was a magical moment.” With a description like that, it should come as no surprise that Sutherland is a big believer in the power of lightbulb moments and what they can lead to. But figuring out whether you’re experiencing a real-deal lightbulb moment or are simply in the midst of a good idea? Well, that’s not necessarily clear-cut.

“It’s like falling in love,” Sutherland observes when asked how to identify this sort of mental crossroads. “You only know when you’re in love when it hits you.” (As if we weren’t already inspired enough by Sutherland’s personal experience with a lightbulb moment, that romantic analogy has us positively craving one of our own.)

Lightbulb moments are critical for anyone pursuing new creative or professional goals because, according to Sutherland, they’re the turning points that make it nearly impossible for you to “revert back to the previous version of yourself.” As soon as she experienced her own “a-ha!” about PleaseNotes, for example, Sutherland jumped into action, starting the research phase that would give her the resources she ultimately needed to turn the journals, sticky notes, affirmation decals, and more from a dream to reality.

If you have a sneaking suspicion that you’ve experienced the head-over-heels, no-turning-back moment that means the creative lightbulb is officially on, Sutherland has some advice for you. Here are six things you should do after your own lightbulb moment.

1. Start quickly, but don’t rush. “I think it’s better to act quickly in a way that feels right and not panicky,” encourages Sutherland. “You usually feel in flow when you act.”

2. Acknowledge it. They say that admitting that there’s a problem is half of its solution… but what about admitting that you’ve had a revelation? That’s important too. Own that moment of inspiration and resist the urge to brush it off as a passing whim.

3. Expand on it. Write it down! Put pen to paper with your idea, and see how you might be able to grow it even further with a little more thought. At this stage, Sutherland recommends keeping it on the DL. People might be quick to shoot down an idea if it’s still in its earliest stages — and we don’t have time for that kind of negativity.

4. Take proper action. Start with research or —if you’re feeling ready for it — establish a work flow that will fit into your existing routine and allow you to get the ball rolling with your idea right away.

5. Allow it to happen. “You might have a moment when you doubt yourself, feel like you’re not doing it right, or get down on yourself,” Sutherland admits. “Go back to what you wrote about your initial realization and get back into that feeling of clarity.”

6. Create a support system. Surround yourself with people who will respect your lightbulb moment and encourage you to act on it. Positive vibes only!

Have you ever had a lightbulb moment of your own? Tell us more! Tweet us @BritandCo!

Alli Hoff Kosik
Alli Hoff Kosik is a freelance writer who is passionate about reading, running, rainbow sprinkles, her lipstick collection, watching embarrassing reality TV, and drinking pink wine. She lives in Brooklyn with her husband and (in her dreams, at least) three golden retriever puppies. Listen to her talk books on The SSR Podcast.
Career Advice
Creativity
Career Advice Girlboss inspiration Self
More From Creativity