This New YouTube Series Is All About Girls Inspiring Girls 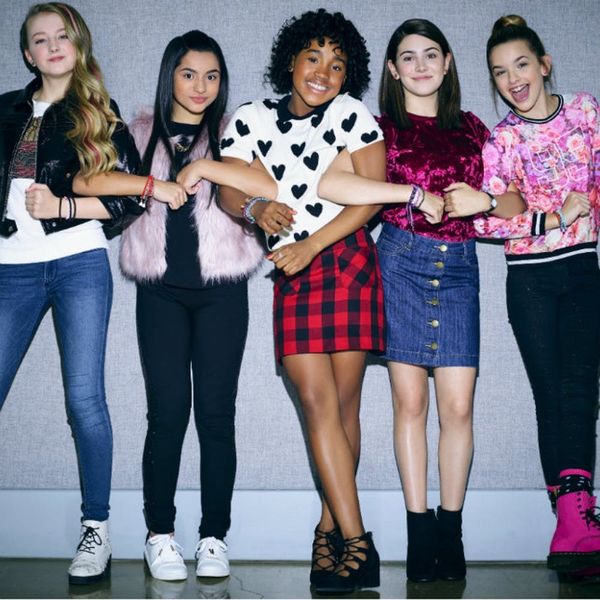 Anyone out there putting in hard work on a job hunt can tell you that tech is where it’s at. Tech-based skills are practically a must in any industry, and web developers and mobile designers are among the professional gigs expected to see the biggest salary boost this year. The pace of technology has accelerated so much, in fact, that many dream jobs haven’t even been invented yet. What’s the takeaway here? The efforts you may have noticed in recent years to engage more young girls in STEM (science, technology, engineering, and math) are super important for the next generation of career women.

To this end, YouTube Red launched Hyperlinked on May 31. The web series stars music up-and-comers L2M and highlights themes of STEM and entrepreneurship against a backdrop of more tried and true coming-of-age storylines. “I hope that after people watch our show, they feel unstoppable, and that they will take all the inspiration and [messages of breaking stereotypes] into their daily lives,” says Lexi Drew, a L2M member and series star.

Hyperlinked was inspired by the true story of a 16-year-old girl who built her own website, ultimately gaining attention and investment from major names like Procter & Gamble. The name-dropping doesn’t stop there, though. The show itself has support from Google’s computer science in media team, The Geena Davis Institute on Gender in Media, Rosalind Wiseman (who wrote the book that inspired Mean Girls), and Kimberly Bryant, founder of Black Girls CODE.

As an adviser to the show, Bryant got an early introduction to the project and shared ideas with the Hyperlinked creative team throughout production. We had the opportunity to get her take on what makes this new YouTube series so special — and why encouraging girls and women to learn more about STEM should be a priority for all of us.

Brit + Co: What excited you most about Hyperlinked? Why did you want to be part of it?

Kimberly Bryant: As an engineer, I am really passionate about girls and STEM, and I think it’s extremely important for girls to see themselves as STEM innovators in media. As a mom, I know how much time my own daughter spends on YouTube, so I was even more excited about a web series showing girls interacting with technology, knowing the potential impact the series can have.

B+C: What do you think viewers of all ages will take away from Hyperlinked?

KB: I think the series will have the greatest impact on girls who are in the same age range as the young stars — middle school girls — although it will certainly have crossover for other age groups. The storyline follows the girls through typical tween experiences and shows them as multi-faceted, talented, smart, and inspirational figures. This, of course, will also resonate with parents in search of positive role models for their daughters, and younger girls will latch onto the series from older siblings. The series is also a groundbreaker in terms of creating a platform for multi-faceted stories which center girls as leaders and innovators. This will certainly create opportunities for similar creative vehicles for teen girls, young women, and women, in general, in a market with very few images of this type. That’s a win for women, overall.

B+C: Why are shows like Hyperlinked important — especially in the current political climate, and as we work as a society to help women embrace STEM?

KB: The work that organizations like Black Girls CODE do to introduce girls and women as STEM leaders is vitally important in our current political climate. We constantly battle male-dominative paradigms that shape the narrative of leaders and innovators as predominantly male and primarily white. This falsely represents the true shift in our society as it relates to the ascension of women and people of color across multiple fields, including the technology space. Media vehicles such as Hyperlinked offer definite alternative images, which help influence perceptions for future generations. It’s extremely important that young people receive these positive and self-affirming messages early in their developmental stages. It allows them to build positive self-images, which are foundations for success and self-actualization as they mature.

B+C: What is so revolutionary about Hyperlinked‘s approach?

KB: There have certainly been similar shows with girls as protagonists on more traditional media platforms, but the current market — especially with young viewers — is moving increasingly to platforms like YouTube. I think Hyperlinked is a fresh take on a familiar format with the added benefit of including a technology focus, with a young, multicultural, female cast.

B+C: Speaking based both on your work with Black Girls CODE and Hyperlinked, can you share generally about the importance of young girls and women learning to embrace and pursue STEM?

KB: Our world is becoming increasingly tech-enabled and tech-powered. It’s very important that women — who represent over 50 percent of the population — have a seat at the table of innovation and creation of technology. We need to position women and girls to become not just the consumers of technology, but the creators of it.

What do you think of Hyperlinked? Tweet us @BritandCo!