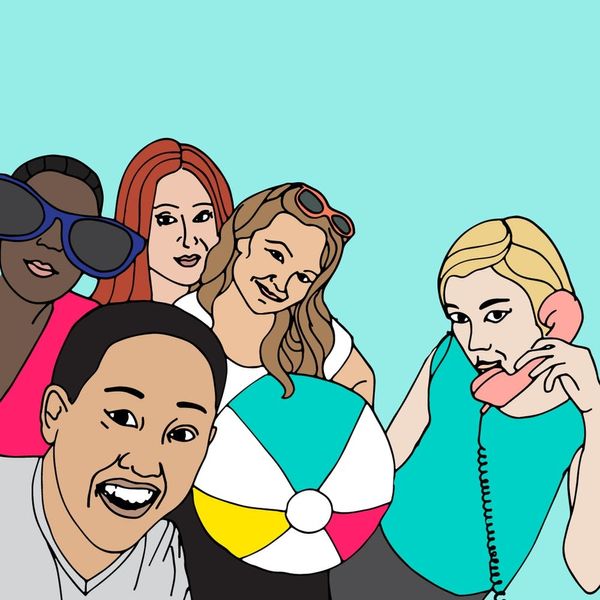 Extroverts are loud. They are charming. They are fierce. I should be an extrovert. At least according to my late July birthday, which brands me a Leo, the zodiac glamourpuss characterized as a majestic powerhouse who commands attention.

But here’s the truth, and I am sure other introverts will agree: Sometimes I would love to have just one iota of what those extroverts are puttin’ out. I am simply fascinated by those who can walk into a packed room, deliver individual and personalized hellos to everyone around the table, then effortlessly grab a seat and throw their feet up like they’re Don effing Draper. It’s magnificent.

What must that be like? This is me when I walk into a room: Upon entering, I spy the closest, easiest-to-get-to sitting area — spots like the edge of a pillow-less sitting window, or the top of a fully in-use radiator — surfaces I wouldn’t even want my cats to nest on. But, hey, if sitting on them means I don’t have to make awkward small talk with boisterous coworkers, then so be it. I know. It’s exhausting. It’s sad. It’s pathetic. I want to be the female Don Draper. So, for a week, I was.

You probably have many questions: How in the world did you keep your social anxiety in check? When did you even find time to go out in between playing ready, set, Netflix? Did your hands shake? Did your cats miss you? Dunno, just did, yes, and very much.

So how did I begin? Well, basically, I googled “best extrovert traits” and then copied them. Yes, I plagiarized extroverts. I’m a plagovert. I passed their traits off as my own. And it was one of the best weeks of my life. Here’s what happened, and hopefully, my experience will inspire your own.

Extroverts love to talk. Since I had a trip planned, I thought that chatting someone up at the airport would be ideal for setting this doozy of a task in motion. And since I am spoken for (there is a ring on it), I thought, Hey, maybe I’ll meet my very best friend here, and we’ll have sleepovers and casserole-swapping get-togethers, and maybe I’ll even be her maid of honor when it’s her turn to walk down that proverbial aisle (she’ll be the most beautiful bride in the world). Too much? Probably, but make no mistake: This is where my mind goes.

Well, I did not find my BFF. I did, however, meet a fellow film buff who I learned is writing, producing and scouting his next film. He was kind and thoughtful and inquisitive. He was an extrovert. And though making small talk with this complete stranger resulted in more stress sweat than I care to admit, I am glad I was able to pull it off. However, the percent chance I will ever do it again lies somewhere between null and void.

Socializing helps extroverts feel energized and inspired. Ugh, socializing. I used to get so agitated when a company I worked for had forced social sessions, demanding members of disparate departments get together over drinks and finger foods. Which, by the way, an introvert translates to “get ready to sit on something really uncomfortable and nod like a bobble-headed fool, because you’re too timid to engage in any convo.”

Now, I’m not necessarily a negative person — I believe they call that “realistic” — but the first thing that comes to mind when someone asks me to do something is, “Um, no, I can’t. Busy.” But unless you consider having dinner with a couple of four-legged creatures “plans,” then, no, I’m never really busy. I’m just scared. Of what, though? Of nurturing friendships? Of having some fun? I don’t know. So for the sake of this experiment, I gave an emphatic YES! anytime someone asked me to hang.

I was actually surprised I still had people who were even asking. One can only take so many no’s before they peace out for good, you know? So, yeah, I went to a spin class (novice spinner right here!), saw a show (in Times Square, an introvert’s seventh circle of hell), went on a literary pub crawl (and even made friends with strangers), and went on a double date with the better half (his friends, not mine). It was awesome.

Extroverts allow people to get to know them easily. This one’s hard. I can’t tell you how obnoxious it is to hear someone say, “I don’t let just anybody in.” But I don’t let just anybody in. I don’t. It’s too weird. It takes me a good year, maybe two, for anyone to actually, really know me. Seriously, a friend of mine thought that I was above petty Bachelor/Bachelorette discussions because I didn’t immerse myself in their high-octave ramblings. Little did she know, I was engaging from within. But I couldn’t fault her. Being misunderstood falls strictly into “my own fault” territory. How is anyone supposed to know how deep my obsession for mind-numbing reality TV goes if I don’t speak up?

So, I shared stuff. I told my friends about how I, too, never miss a night watching the train wreck that is “who will be the next Mrs. Higgins?” (I might even attend a watching party next week… I’ll have to check my schedule though). During that before-mentioned double date, I allowed myself to get a little more personal than usual. Meaning my answers to those inevitable get-to-know-you questions didn’t stop at, “Yes, I like guacamole. Do you?” The conversation, like the tangy margs, flowed. I actually found that they were nervous a bit also. Which, in some kind of twisted way, calmed my nerves a bit. And allowed me to just be me… if only for a night.

Sound familiar? Tell us all about your personal story by tweeting us @BritandCo below!

DeAnna Janes
DeAnna is a freelance writer and editor who hails from Texas but now calls New York City home and a pair of felines everyday coworkers. When she's not putting thought to Google doc, she enjoys partaking in daylong pub crawls, can be found attending film festivals from Park City to Toronto, and dreams about one day becoming best friends with Ilana Glazer and Abbi Jacobson.
Home News
More From Home News