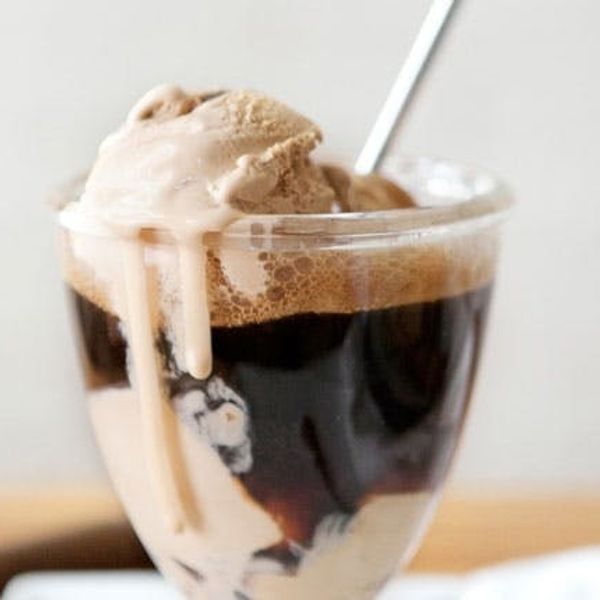 Let’s be honest. Ice cream floats are… awesome. Whether you’re going for the classic root beer float or adding a scoop of lemon sorbet to a glass of bubbly, nothing says summer like fizzy bit of frozen goodness. As it turns out, the foodies on the Internet agree! Here are 20 unusual takes on your favorite refreshing summer sweet.

This yummy summer sipper is made using sparkling pink lemonade and lemon sorbet. (via Grandbaby Cakes)

You know that fizzy quality Kombucha has? Add a little ice cream to the mix (preferably the good organic stuff) (via Eat Life Whole)

Made with homemade rhubarb syrup, this is like a hot summer day’s take on rhubarb pie. (via Not Without Salt)

Bourbon County Stout and a pint of caramel gelato? We’ll take it. (via A Better Happer St. Sebastian)

This little number was created with homemade iced tea ice cream and fizzy iced tea. Sugar and caffeine, together in one creamy float. (via Brit + Co.)

At first glance, you may think there’s no way beer goes with ice cream, but you would be mistaken! (via Brit + Co.)

There’s a new Captain and Tenille in town and it comes in the form of Captain Morgan and Cherry Coke, with a little help from vanilla ice cream. (via Live Love Pasta)

Swap out club soda for champagne and you’ve got your new favorite mimosa remix. (via Ciera Design)

An All-American classic times two? Love it! This recipe calls for vanilla ice cream, ginger ale, and apple cider. So simple and so delicious. (via How Does She?)

The key to keeping this mix the sour, bitter, and sweet? Honey! (via So Hungry I Could Blog)

For a float with a bit of eastern flair, try making this homemade mango ice cream and pairing it with a spicy ginger beer. (via Snail’s View)

We’ve gotta give props to the originator of the ice cream float: Root beer! These shooters are a sweet way to get a bite size chocolate-covered version of this classic. (via Somewhere Splendid)

First of all, watermelon soda? We need to make this, like, yesterday. (via First Look Then Cook)

Looking to drink your dessert and get a little tipsy? This recipe calls for Limoncello, Grand Marnier, champagne and vanilla ice cream. Yum. (via Cupcake Project)

Okay these are too much! Cobblers that float and involve ice cream? We are definitely trying this recipe this summer. (via Better Recipes)

Lime sherbet and sprite is all you need to cool down with this refreshment. (via Cassidy Tuttle)

Another dessert that floats. We love it! (via BraveTart)
Anjelika Temple
As Co-Founder and Chief Creative Officer of Brit + Co, Anjelika Temple brings her voracious consumption of all things creative and colorful to DIY projects, geeky gadgetry finds and more. When she's not DIY-ing her heart out, you'll find her throwing dinner parties with friends or adventuring with her husband David, their daughters Anokhi and Indira, and their silly dog Turkey.
Food Recipes Roundups
Dessert Recipes
Food Recipes Roundups Ice Cream
The Conversation
Reviews:
More From Dessert Recipes