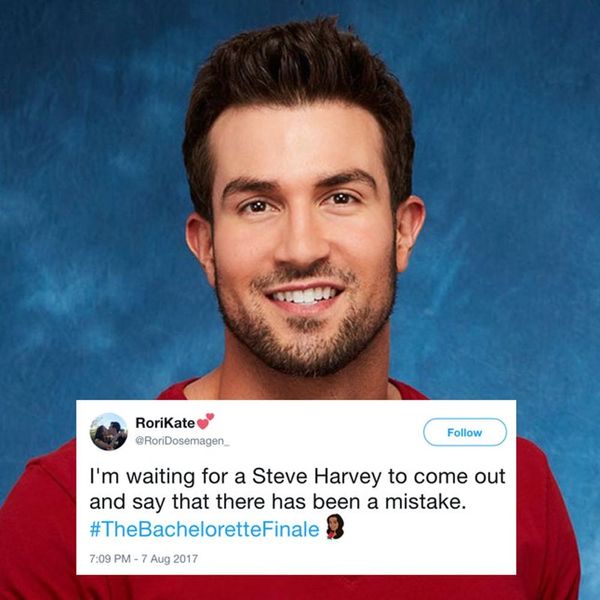 Well, here we are. Another Bachelorette season down and three hours of television spent on Chris Harrison’s incredibly awkward questions. If you missed last night’s finale, I can’t in good conscience tell you it’s worth watching. I can, however, advise reading our recap and pouring one out for the beautiful angel-faced human that is Peter Kraus. Because *spoiler alert* he was broken up with in the most dramatic of fashions in an interaction that went something like this:

Peter: So I’m super into you, but I’m just not sure I can propose after two months. Seems kinda fast.

Rachel: UGH, fine. I guess I’ll pick the other guy. Brandon, I think his name is? *Looks to producers to confirm*

Cue Rachel’s cried-off eyelashes and Peter dramatically ripping off his shirt to sob into. Okay, that part is kind of worth watching if you like perfect abs and seeing reality television make a perfectly sensible man ask himself, “What is wrong with me?”

"What is wrong with me." ⛈#TheBacheloretteFinale pic.twitter.com/4CP4ktqR4g

Okay, but we’re here to talk about Brandon — sorry, Bryan. In the most anticlimactic finale that ever was (actually, can’t confirm that, as this is the only season I’ve really watched), Miami’s finest chiropractor (also not confirmed), Bryan Abasolo, won this season of The Bachelorette with a proposal that took the internet by storm. By that we mean there was *literally* a windstorm during the proposal that could have easily sent the ring into the abyss. Honestly, props to the sound guys who managed to make that interaction audible and Mother Nature for trying her best to intervene.

As you would expect, the internet is feeling a lot of ways about last night’s breakup with Peter, Bryan’s win, and that epic twist Chris Harrison teased and never followed through with. If you’re up in arms today trying to process all the hours of television you committed to that led up to this point, we recommend some 21st-century therapy (i.e. reading a bunch of hilarious tweets that you deeply relate to). HERE. WE. GO.

#TheBacheloretteFinale the last time I was this confused by live tv I was watching the 2016 presidential election results.

America: Nick and Vanessa are the worst couple of this entire franchise
Bachelorette Season 12: hold my beer #TheBacheloretteFinale

The worst part is she's about to realize only Bryan is left. #TheBacheloretteFinale

Does this Peter + Dean pic come in desktop wallpaper dimensions? Asking for a friend.

An accurate portrayal of how everyone felt when Bryan came out and REproposed to Rachel:

He's proposing again? We didn't even want to see it the first time #TheBacheloretteFinale pic.twitter.com/vw5lq58XDc

TFW Peter is just asking for like a week of normalcy and a visit to the farmers’ market before proposing, and then Rachel says she and Bryan are “not rushing anything…”

"We're not rushing anything we just wanna wait and build our lives together" THAT'S WHAT PETER WANTED #TheBacheloretteFinale pic.twitter.com/x9Gmey0EbF

Never did we think we’d consider Simon Cowell an ally, but there’s a first for everything.

Advice to remember during the next run-in you have with an ex:

Rolling your eyes and saying "I'm living my best life" shows that you are definitely not living your best life. #TheBacheloretteFinale

At least we can thank Peter and Rachel for providing us with a new breakup scale:

On a scale of 0 to "I walked by her eyelashes for two days," how bad was your last breakup? #TheBacheloretteFinale

THERE IS STILL TIME, RIGHT?

I'm waiting for a Steve Harvey to come out and say that there has been a mistake. #TheBacheloretteFinale

FYI, Steve Harvey is now responsible for fixing every pop culture wrongdoing from now until Rachel realizes she’s meant to be with Peter.

We will leave you with this truth bomb from former Bachelorette Ali Fedotowsky:

Can we really blame Peter for not being ready to propose to someone after only knowing them a couple months? #TheBacheloretteFinale

Peter, we love you, and if you’re out there spending today reading the internet’s Bachelorette recaps, just know that I can be found at B+C’s NYC headquarters five days a week. Also, I love the farmers’ market.

Cortney Clift
Cortney is the senior writer and special projects editor at Brit + Co. She typically covers topics related to women's issues, politics, and lifestyle. When she's not buried behind her computer you'll find her exploring New York City or planning her next big adventure.
The Bachelorette
TV
The Bachelorette
More From TV