The Bachelorette Finale Recap: GIVE IT TO ME 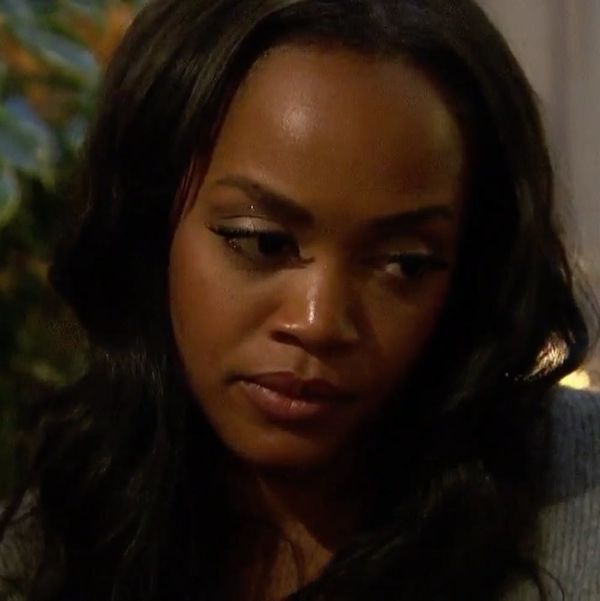 “It’s emotional!” Rachel Lindsay says about her season of The Bachelorette on the grand three-hour finale. If you already thought the show wasn’t fun anymore, you probably felt like you would never have fun again while watching terrible Chris Harrison (seriously, how does this dude still have this job?) force Rachel to relive her last few days on the show live in front of a studio audience. Sure, the end would finally mean the reveal of a fiancé whose identity she had to keep secret (even if her friends didn’t get the memo on secrecy), but was the three-hour journey to get there supposed to be extra agonizing just so we would be relieved when we saw Rachel happy and engaged, no matter who she picked in the end? Nice try, ABC. The Bachelor Nation may be okay with what went down, but the rest of us are in collective distress. Let’s relive the horror.

We pick up directly where we left off two weeks ago with Peter and Rachel continuing to disagree on what an engagement implies. At this point, who cares what an engagement is, Rachel?? You clearly like this guy and you also have a law degree so go into mediation and figure out how to eventually spend your Sundays at those Wisconsin farmers’ markets! And Peter, don’t forget that you’re essentially on a game show. Play the game a little bit, man! DON’T DO THIS TO US, Y’ALL.

There’s a little bit of a tension relief as she invites Peter to have sex in the fantasy suite. Now that they’ve been able to do something real couples do, they both seem very happy and Peter will, of course, be able to propose to her the next day, right? Ugggghhhh, this show.

Rachel has one date left with Bryan but she’s totally distracted thinking about Peter. She says it’s because what he said has her totally messed up, but it’s clearly because she’s got a much stronger connection with him, right? Robo-boyfriend Bryan turns on puppy dog mode later and says he was down because Rachel wasn’t entirely there during their date. She loves that he felt bad and commits to focusing on Bryan.

Fine, let’s focus on Bryan. He’s boring, he kisses like a vacuum, and his facial hair grooming is unacceptable for national television. Done focusing on Bryan.

The Rose Ceremony follows and unsurprisingly for those of us who know what’s best for Rachel, Peter is best dressed and Bryan desperately needs his suit jacket pressed. Even with Rachel calling out Peter for not wanting to get engaged, Eric is unsurprisingly eliminated.

“I do love you,” she tells Eric unconvincingly. “I’m just not in love.” Eric, ever the champion of life, bows out beautifully, grateful that he has experienced love with Rachel but certain that she will get what she wants. This is the only feel-good moment of this brutal finale.

Two more dates until this hell freezes over and first up is Bryan. At this point, couldn’t Chris Harrison just tell us via voiceover that Bryan and Rachel went on the most boring date in a hot air balloon and we’re better off not seeing it? Rachel tells him he’s the most constant factor throughout this process and he tells her, “I’d be the most heartbroken I’ve ever been in my life,” if she didn’t choose him. I have a feeling that he could say that line to a display of grocery store avocados with the same amount of conviction.

Rachel then takes Peter to a church to talk to a priest about marriage. Holy crap. This is happening. Despite the priest talking about how great marriage is and how they should get married and stuff, Rachel and Peter still find themselves completely at an impasse. He desperately does not want to lose her and starts getting very passionate, telling her she’ll be settling for a mediocre life if she chooses a ring over him. BURN. She cries and snots on his sweater. What is that if not love??? She leaves, having cried off her eyelashes, he rips off his sweater, and cries out “What is wrong with me?” If it were a normal situation, they could take some time to regroup and figure it all out, but we’re on a very important deadline here, so IT’S ALL OVER.

Up to this point, I haven’t addressed the constant breaks from the show where Chris Harrison continues to be the worst interviewer ever, but Rachel’s reunion with Peter on the live show immediately after watching their breakup is too anguishing to ignore. Peter is still very emotional and he tells her that he regrets not giving himself up to the process. Rachel, the former skeptic, tells him that the structure of The Bachelorette is not for him. She frames this as a nice thing to say about him, but it comes off as more “Why did you even come here?” He’s deeply heartbroken while she is cool about it and if that isn’t the bitterest pill to swallow, there’s still a good 30 minutes left in this emotional dumpster fire to convince you that reality television love is dead.

It would be reasonable to tune out at this point and not watch Bryan propose to Rachel. You wouldn’t be missing anything that felt emotionally satisfying. Because mother nature is angry that she broke up with Peter, the wind almost immediately ruins her hair. She officially chooses Bryan, who has the most unconvincing joyful reaction, like he just won a free deluxe carwash.

At this point, I’m drunk enough to think, “Does she have to film all possible conclusions? Is there still a twist here?!” There’s no twist. He presents her with an ugly diamond engagement ring. She squeals, “Yes! Give it to me!” and it feels confirmed that she was really just in it for the ring the whole time. She asks him if he will accept the final rose. He responds, “1000%.” 1000% is only acceptable as a measurement of growth or decay, Bryan. You can only accept that rose up to 100%. You’re not smart enough to marry a lawyer.

Back at the live show, Chris Harrison demands that we show Bachelor Nation love for the happy couple. I have no Bachelor Nation love for a relationship built entirely on an exchange of accessories! He re-proposes (gross), and tells her almost threateningly, “I never want you to take this ring off of your finger.” I hope she never has to have it resized or has an allergic reaction to it or else their love might not be real anymore. She tells Chris, “We’re not rushing things,” when it comes to getting married. Glad you like to take it slow now, Rach. Chris has a touching surprise for them: It’s their People Magazine cover. Please note that Peter is also on this cover. I begrudgingly wish you well, Rachel.