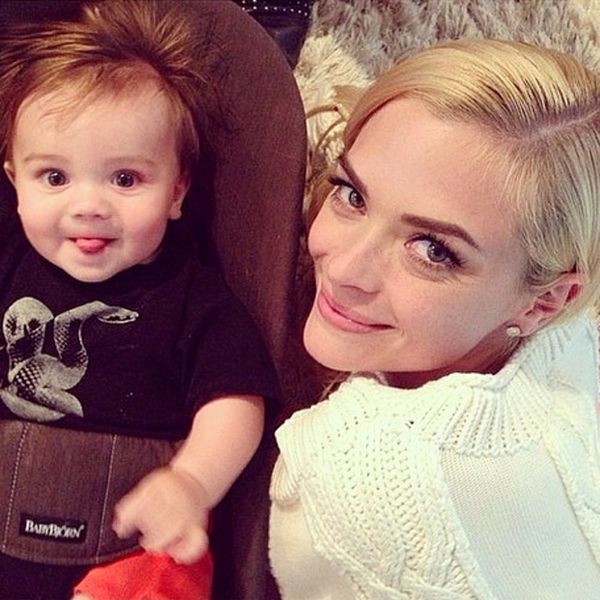 We almost went a whole week without any celeb baby announcements to report, but (phew) Friday has come with some major pregnancy news. Actress Jaime King took to Instagram yesterday to share with all her fans that she and her husband are expecting their second child.

This isn’t the first time King and Newman have shared pregnancy news on Instagram; back when they were expecting their first baby, the couple posted a cute pic of the two of them and their pups with a caption that said, “Family portrait… Plus ONE on the way!! (No fur).”

While we’re on the topic, we might as well take this chance to reflect on a few more of our favorite celebrity baby announcements that you could also easily recreate for you and your growing fam. If Hollywood continues at this pace, we’re guessing we’ll be seeing a lot of them in 2015.

1. Kissing Up: After months of pregnancy rumors, Justin Timberlake finally confirmed that he and Jessica Biel were expecting on his birthday with this adorable pic. (via @justintimberlake)

2. Read Between the Hashtags: Rock star, Gwen Stefani posted this photo on Instagram with the hilarious caption, “Was ready to hand over the crown, but I guess I am still queen of the house. #itsaboy #surroundedbyboys.” (via @gwenstefani)

3. Photoshop Magic: Fergie and Josh Duhamel definitely win for most hilarious announcement. They shared that they were expecting their first child by Photoshopping their baby pictures together with the caption: “Fergie and Me and BABY makes three.” (via @joshduhamel)

4. Pun Central: Sometimes you just can’t beat a classic. The photo’s subtitle was simply, “Look what we’ve got cooking! A Bun’dle of love!” (via @stacykeibler)

Have you seen any creative baby announcements lately? Share a picture with us in the comments below.

Cortney Clift
Cortney is the senior writer and special projects editor at Brit + Co. She typically covers topics related to women's issues, politics, and lifestyle. When she's not buried behind her computer you'll find her exploring New York City or planning her next big adventure.
Pregnancy
Parenting
Pregnancy