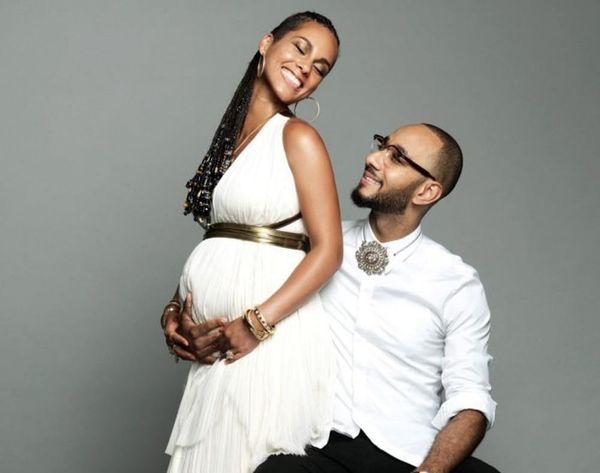 Remember back in the day when stars hid their pregnancies? When Mrs. Cosby and Elaine held baskets of laundry over their budding bellies on TV and it was likely unheard of to share your first baby pics with People? Well, times = a changin’ because in this age of social media, celebrities have nailed the whole “I’m pregnant” announcement (and, thanks to you guys, we have seen some pretty sweet announcements). Whether you’re expecting or just looking for some fun announcement inspiration, check out some of the cutest ways celebrities have chosen to share their big, happy news!

1. Read Between the Hashtags: Always the star, Gwen Stefani posted this photo on Instagram with the hilarious caption, “Was ready to hand over the crown, but I guess I am still queen of the house. #itsaboy #surroundedbyboys.” (via Gwen Stefani)

2. Footprints in the Sand: We love everything about this photo announcement, from the writing in the sand to baby Camden running almost out of frame. When Nick Lachey posted it on Twitter he added the caption, “Can’t think of a better way to celebrate three years of marriage to my beautiful @VanessaLachey than this! #family.” (via Nick Lachey)

3. The Power of Photoshop: We’re giving Fergie and Josh Duhamel a thumbs up for their vintage-looking announcement that definitely made us laugh. They shared that they were expecting their first child by Photoshopping their baby pictures together with the caption: “Fergie and Me and BABY makes three.” (via Josh Duhamel)

4. Make a Pun: Go with an all time classic like Stacy Keibler did with this Instagram photo of a bun in the oven. The photo’s subtitle was simply, “Look what we’ve got cooking! A Bun’dle of love!” Cute. (via Stacy Keibler)

5. Full Glamour Shot: Alicia Keys posted this gorgeous photo on Instagram with the romantic caption, “Happy Anniversary to the love of my life… And to make it even sweeter we’ve been blessed with another angel on the way!!” (via Alicia Keys)

6. Tiny Shoes Snap: Kelly Rowland didn’t even have to use the word “pregnant” in her caption on this adorable Instagram photo. Instead she shared the news with, “I’ll be stuntin like my daddy.” (via Kelly Rowland)

7. Let the Siblings Speak: Instead of a photo caption, Jessica Simpson put her daughter Maxwell in front of this Twitter announcement for a fun twist. And baby Maxwell just looks so excited! (via Jessica Simpson)

8. Bare It All: Not surprisingly, Victoria’s Secret angel Doutzen Kroes gets the prize for sexiest baby anouncement. Evocative of the classic Demi Moore photo but with just a budding baby bump, we definitely admire her confidence! (via Doutzen)

9. Blog the News: Sticking to 140 characters not your thing? Molly Sims wrote a whole post on her website about the exciting news and how she first shared it with her husband. She tucked a message inside his fortune cookie and said that watching him take those two bites were the most nerve wracking moments in her life. (via Molly Sims)

10. Sing It Loud: Why tweet when you can tell a live audience? Jennifer Lopez and her husband shared the news during a concert to a very surprised and pleased crowd! Okay, okay, so you’re not performing at MSG anytime soon — you could do the same thing at the next big party or family gathering. (via Lil Sugar)

11. Family Photo: Bachelor survivor Melissa Rycroft announced she and her husband were expecting baby number two by posting a photo with the caption, “Sooo… It’s official, the Strickland Family is growing by one next spring! Ava is so excited to be promoted to Big Sister!! We are so excited for our new little addition!!” (via Melissa Rycroft)

12. Kissing Selfie: Pete Wentz and his girlfriend kept things sweet and intimate with this photo (take note of where his hand is!), and the simple caption, “We’re super excited to announce that we’re expecting a baby!” (via Pete Wentz)

13. Prepare for the Cravings: Scott Foley tweeted the above pic of his pregnant wife offering him a family-size frying pan for his bday and joked that he wasn’t the one with the bizarre cravings! (via Scott Foley)

14. Replacement Baby: Jaime King announced via Instagram that she and her hubby were going to have to find room to squeeze a brand new baby in their growing family. Sorry, puppies. (via Jamie King)

15. Keepin’ It Simple: Taking an old classic, Busy Phillips tweeted a photo of the pregnancy test and the caption just read, “So this happened.” We are definitely laughing at her dry sense of humor. (via Busy Phillips)

Would you rather post your baby announcement to social media or use snail mail? Let us know in the comments below!

Kate Thorn
Kate Thorn is an illustrator, foodie, photographer, and blogger at Create & Kate. She loves creating art, traveling, and all things chocolate. A native to the Great Northwest, she is currently living in London and pretending to be a mature grad student.
Party