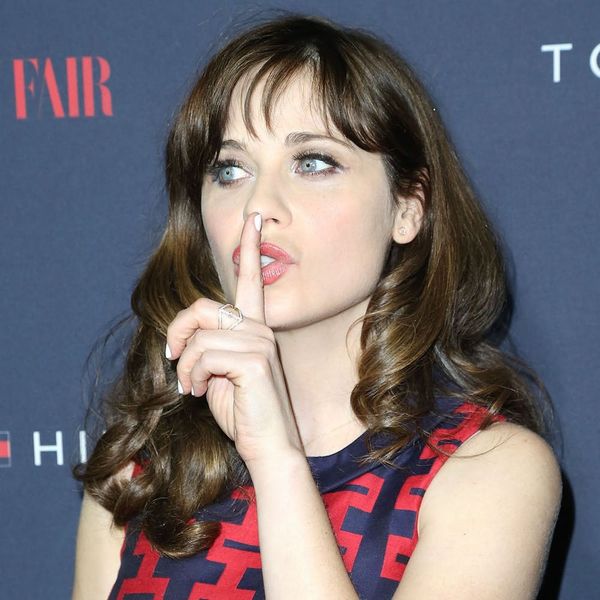 Sure, Zooey Deschanel, like, justannounced her pregnancy, and maybe we’re a little excited. We’ve already suggested perfect engagement rings for the New Girl, so it should come as no surprise that we’ve been dreaming up potential baby names for her as well. Just in case she’s reading, we have a few pretty perfect (if we do say so ourselves) baby names for her little bean.

If It’s a Girl

1. Coco: Now this would only work if Zooey’s baby has her last name, but it’s just too good. Say “Coco Deschanel” out loud. Pretty fun, huh?

2. Cece: It would be so sweet of Jess to name her baby after her BFF. Wait, New Girl isn’t real life? Our bad.

3. Patience (or Prudence): On She & Him’s record, Volume 2, Zooey and M. Ward covered the song “Gonna Get Along Without Ya Now” by ’50s sister-singing duo, Patience and Prudence. We wouldn’t be surprised if Zooey paid homage to the music of her favorite era.

4. Paisley: As followers of Zooey’s fashion choices, we’ve noticed that she loves patterns. In fact, we were going to suggest the name “Dot,” but it turns out she already named one of her dogs that.

5. Clementine: Zooey admits that she has a weird diet — she’s allergic to eggs, dairy and gluten. While we’re assuming she eats a lot of fruit, there’s also something so perfect about the name Clementine for Zooey’s mini me.

2. Franny: Zooey was named after the (male) protagonist in J.D. Salinger’s novel Franny and Zooey, so how absolutely perfect would it be if she named her baby boy the (female) protagonist’s equally ambiguous name?

3. Kaldi: Zooey has talked about her love of coffee, so it wouldn’t be totally out of left field if she named her baby after the Ethiopian goatherd who discovered the coffee plant.

4. Blue: Just as much as Zooey loves patterns, she loves color (and who could blame her?). Blue seems like just the kind of unexpected name Zooey would pick.

5. Oz: Zooey has said in numerous interviews that The Wizard of Oz inspired her to take up acting. That’s pretty hefty praise, so she might even name her baby after the film that intrigued her as a child.

We can’t wait to hear what Zooey names her baby. And we’re sure that whatever she picks will inspire a baby name trend in 2016.

Do you have any baby name guesses for Zooey’s little nugget? Let us know in the comments!

Amanda DiGiondomenico
Amanda is a freelance writer and graphic designer who blogs about living a stylishly nerdy life at The Spendicate. A lifelong resident of Baltimore, MD, Amanda is an art school dropout, who managed to earn a masters degree in nonfiction writing. On the weekends, she's an expert guacamole maker, a novice jogger and an intermediate yogini.
Baby Names
More From Baby Names