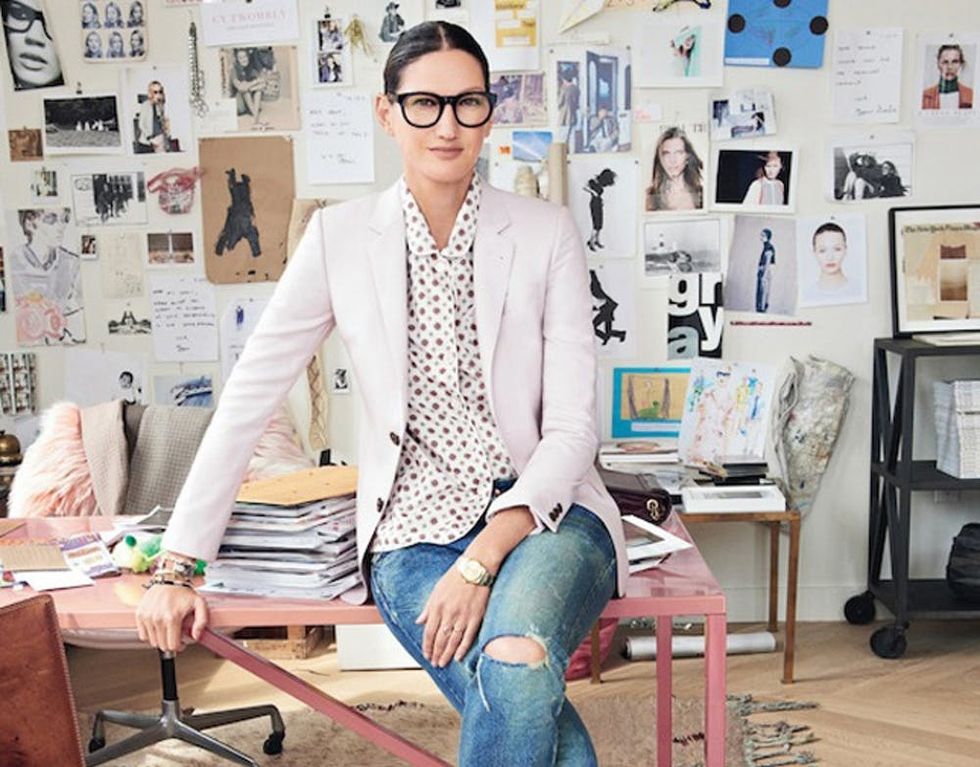 Jenna Lyons, the creative director and president of J.Crew, is kind of our idol. She’s smart, effortlessly sexy and basically ripping apart everything we believe to be true about fashion industry superstars (let’s not even mention that she also got to cameo alongside Lena Dunham on last season’s Girls). But to live like Jenna, you don’t necessarily have to be the head of a billion dollar company. This wise lady has a whole bunch of tips you can start using today. Here are 12 style and life lessons from the fashion power player.

1. Embrace Your Imperfections: “There’s sexiness in not trying to be sexy. Sexy for J.Crew is something more natural, not when everything is firing on all cylinders. There has to be something that’s a bit undone. You can’t have perfect hair and clothes and makeup. You need an element of imperfection to make you feel like there’s a person behind it all.” (via Into the Gloss)

2. Keep Your Morning Routine Fun: Lyons says she showers at night so she can sleep a little later and spend time with her son in the morning. Sometimes she also lets him pick out her shoes. “I have these flat shoes, Christian Louboutin, with spikes all over them. If left up to him, I would wear them far too frequently,” she told Harpers Baazar. And if there is one thing Lyons hates it’s a uniform. “The idea of a uniform is like a slow and painful death to me. There is nothing I like more than getting dressed.” (via Harper’s Baazar, image via NYMag)

3. Go for a Red Lip or a Dark Eye: But never both. Lyons likes a bright lip during the day. If she is transitioning to a nighttime look, she says she’ll usually opt for a smokey eye and leave the lips bare. (via the New York Times, image via Into the Gloss)

4. Host a Nightly Magazine and Wine Party for One: “To unwind, I usually drink one too many cocktails. I love looking at magazines. I get every possible one. I read everything from fashion magazines to New York. It’s a problem. I have stacks all over the house.” (via Harper’s Baazar, image via Models.com)

5. Pay Your Dues: Lyons is practically the poster child for working your way up. At 21 she joined the company as an assistant to the assistant to the person in charge of rugby shirts after graduating from NYC’s Parsons School of Design. 24 years later, she is president and executive creative director to the billion dollar brand. (via Glamour)

6. Find a Fragrance and Make It Yours: Lyons tells TheNew York Times, “I’ve been wearing Creed Silver Mountain Water for years. It’s something that I want to hide, because I don’t want anyone to smell like me. The last year, I’ve been working with Arquiste on J.Crew scents, which has been such an interesting experience. I’d wear the trial samples and noticed that scent changes the way people respond to you. For me, my scent has become part of my personality.” (via The New York Times)

7. Overnight Success Probably Isn’t Going to Happen: “There’s this idea that everybody has to have everything right away. But you have to let the slow burn happen. I wasn’t the superstar. I had to work for it. Really long hours.” (via Marie Claire, image via GQ)

8. Mix Fancy and Casual Clothing: Lyons is a master at this. She’s often spotted walking the red carpet in a sweatshirt and heels and even wore a cashmere sweater to the Met Gala. Sometimes, unlikely combinations have a certain magic to them. Lyons says, “If you have one of our (J.Crew) flip-hem wool skirts, you can wear it smart and flirty with a blazer and shirt and jewels and a heel. But you can also wear it dressed down, with an oversized sweatshirt and New Balance trainers.” (via The Guardian, image via PopSugar)

10. Don’t Play by the Fashion Rules: Don’t like heels? Don’t wear them! Jenna tells TheTelegraph, “There’s nothing more unattractive than someone in heels that are causing them pain. I believe in looking happy.” (via The Telegraph, image via Tomboy Chic)

11. Approach Old Age With Ice Cream and a Martini: It’s true, y’all. If you’re lucky, you get to get older. Rather than head to the surgeon or apply 50 creams a day, it seems like a much better idea to go with Lyons’ approach. “I joke all the time that I’m old, and I’m getting older, and I feel it, so I guess I would rather talk about it with a smile and say, ‘Oh God, I’m old!’ than spend all my time at the dermatologist. I approach aging with ice cream and a martini.” (via Vogue)

12. Bad Haircuts Happen to Everyone: Yes, even to fashion royalty. “At 30, I cut bangs and everyone said it was the biggest mistake of my life.” Jenna tells the New York Times. “Then for some reason, at 40, I took a picture of Alexa Chung and tried to get my hair cut like hers. I don’t look like her. My hair texture is nothing like hers. Who knows why I did it! A friend from California was staying with me, and her first reaction was, ‘Oh, my God, I thought you were wearing a wig.’ I’ve been recovering from that haircut, which was years ago. I literally haven’t had my hair cut since.” (via The New York Times, image via Peter Hapak)

35 Healthy Recipes You Can Make in 30 Minutes or Less

These Cookbooks Have All The Summer-To-Fall Recipes You Need

17 New TV Shows and Movies To Watch This Fall