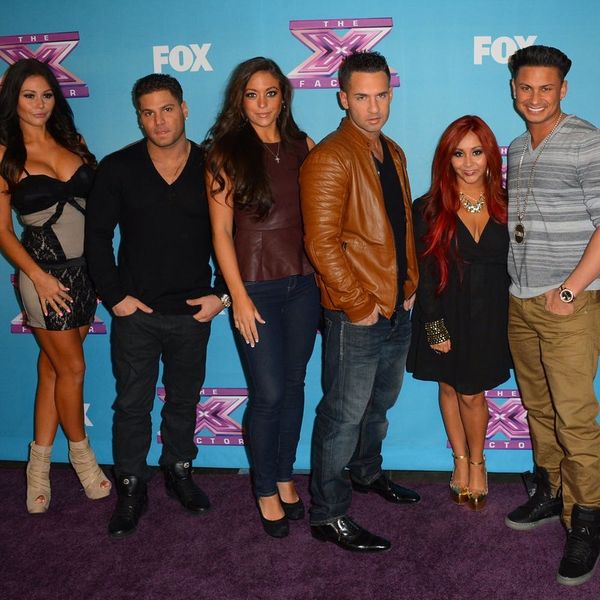 Jersey Shore is BACK, y’all! Rumors of a reunion first began swirling last month, as everyone’s fave fist-pumping crew got together to film a Burger King commercial (weird, we know). Lucky for fans, their unexpected gig was just the tip of the iceberg, as it was confirmed soon after that the gang was merely prepping for their return to the small screen with a new E! special titled Jersey Shore Road Trip.

Set to air on August 20, the footage will be part of a larger docuseries that reunites different TV show casts on each episode. Though the JS cast appears to be down a few (Vinny Guadagnino, Ronnie Magro-Ortiz, and Deena Cortese are noticeably absent from the clip), Nicole “Snooki” LaValle, Jenni “JWoww” Farley, Pauly D, Mike “The Situation” Sorrentino, and Sammi “Sweetheart” Giancola, are all back and rocking just as much fake tanner and hair gel as ever, at least if the newly released trailer is any indication!

Sure, everyone has aged and grown up a bit (LaValle and Farley are parents now, after all), but it’s pretty clear from the mini clip that some things never change: As the cast takes a stroll down the boardwalk (and memory lane), LaValle declares, “The best thing that could happen is Jenni or Pauly getting arrested.” Oh, my!

ITS HAPPENING GUYS! August 20 on E! with my Best Friends! Love my roomies forever ❤️❤️❤️❤️ #JERZDAYISHERE

The pint-sized Etsy star also teased the big reunion on Instagram, posting a short video of her Jersey Shore #fam getting rowdy in a car, which she captioned, “ITS HAPPENING GUYS! August 20 on E! with my best friends! Love my roomies forever,” along with a bunch of heart emojis.

Now, the only thing we’re missing is a little GTL… fingers crossed!

Will you be tuning into Jersey Shore Reunion Road Trip? Tweet us @BritandCo.

Barbara Pavone
Barbara Pavone is a pop culture-obsessed writer based in beautiful (but ridiculously cold) Montreal, Canada. When she's not working, she's sipping on a Pimm's Cup and daydreaming about her celebrity hero, Saint West.
TV