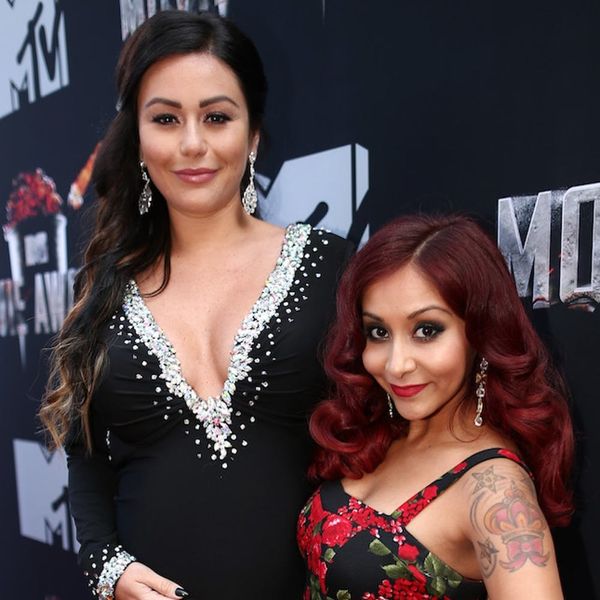 Reality TV just hasn’t been the same since the Jersey Shore cast packed up and moved out of Seaside. While Nicole “Snooki” Polizzi and Jenni “JWoww” Farley still work on projects together and remain BFFs, and all the Shore girls still get together to celebrate big occasions, such as Sammi Sweetheart’s 30th birthday, we miss the days of t-shirt time, family dinner Sundays, and hungover shifts at the Shore Store. Recently, JWoww said she’d be open to the idea of a Jersey Shore reunion, and had even been texting the show’s creator — and given some recent events, we’re starting to think *something* is actually happening.

In late June, Snooki posted a few pics of the girls — JWoww, Sammi, Deena Cortese, and herself — posing together (and looking AMAZING, might we add). As noted above, this isn’t entirely out of the ordinary, as the ladies do still get together from time to time.

What in The Dirty Lil Hamster is happening here 🇮🇹😉 @usatoday

But Mike “The Situation” Sorrentino has been dropping some not-so-subtle hints too, posting Instagram pics of headlines from USA Today and other outlets suggesting a reunion is in the works. “We have a Situation,” he captioned one of the pics, complete with that sly winking emoji.

Earlier in June, eyewitnesses in the Asbury Park and Point Pleasant Beach areas of New Jersey tweeted their excitement over spotting the cast filming along the boardwalk.

I just saw on @snooki snapchat jwoww, mike, pauly, and sammi sweetheart on the boardwalk and I've never been happier.

The Asbury Park Press even reported that the cast was up to something, although the details on what exactly it was and who’s behind it are still unclear. “They were here for a couple hours and had dinner and played boardwalk games,” the director of marketing for Jenkinson’s Boardwalk in Point Pleasant Beach, Toby Wolf, said.

Asbury Park Mayor John Moor further clarified that while a filming permit was obtained, it caught everyone off guard to see the Shore kids back at the boardwalk, as the permit was from a different production company than the one that originally made the show, and it was for something called “Roadtrip Reunion.” An MTV rep told the Asbury Park Press that it is not an MTV project. Hmmm.

Meanwhile, Snooki and JWoww have been giving fans sneak peeks at whatever it is they’re up to on Snapchat, and while so far all the photos only feature the ladies, earlier in June, one eagle-eyed fan claims to have spotted the Situation and Pauly D in tow as well. Eee!

JWoww and Snooki have both said that a reunion would have to accommodate their lives as moms of young kids who love to go to bed early, but even without a wild night at Karma, there’s no doubt this group would be able to find some fun on the boardwalk. Fingers crossed!

Would you watch a Jersey Shore reunion special? Let us know @BritandCo!