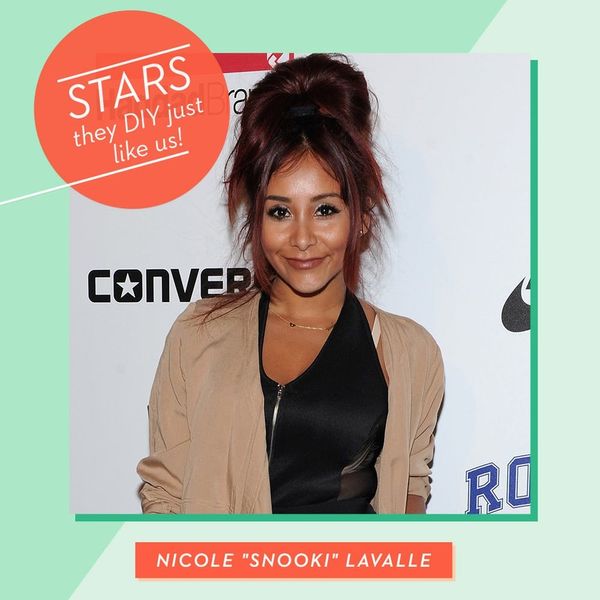 Four years ago, one might have been afraid to hand Nicole LaValle a glue gun, let alone a sledgehammer. Known as “Snooki” on MTV’s Jersey Shore and its subsequent spin-offs, the most creative thing the cameras caught the pint-sized reality star making back then was a meatball sandwich. Oh, how times have changed.

Since the show’s demise, Nicole — *NOT* Snooki, “I haven’t been that girl for four years,” she tells us — has been slowly but surely transforming herself from hot mess to a hot mogul with serious DIY skills. With a book franchise, her own clothing line, not one, but two reality TV shows in the works (Nicole currently co-stars with husband Jionni LaValle in FYI’s Nicole & Jionni’s Shore Flip and is also set to appear on season eight of Celebrity Apprentice), a podcast and her own Etsy store — where she makes everything from scratch and ships it herself — she’s definitely got her hands full. Oh — and did we mention she’s also a stay-at-home mom to her two kids, Lorenzo and Giovanna? “It’s good to be busy,” she tells us. “You’re literally working for your kids, to give them a better life.”

You also make it work for you, which is exactly what she’s done when it comes to her Etsy store. “It’s basically just a little hobby that I do on the side,” she says. Consisting of mugs, jewelry, bags and more, her wares help her give a little piece of herself back to her supporters, with phrases you can just hear her saying out loud (eg: “You’re my poop”).

“I love making crafts for the fans,” she says. It can be hard to keep up with demand, so she puts the store on hiatus when things get too overwhelming. “I keep it open for about three weeks, [then I] close it to catch up,” Nicole says. Nicole’s Craft Room is currently up just for Brit + Co readers, so make sure you sneak your orders in while you can!

In the meantime, Nicole’s schedule might see her carrying a toilet down stairs with Jionni one day for Shore Flip (Nicole says that while they get annoyed with each other from time to time and bicker, they make a good team when it comes to getting work done) or crafting with her toddlers the next. That’s right — her little ones are mini DIY-ers! “I think it’s great for their motor skills,” she says. “It just helps them to evolve and grow.” Nicole loves making things for her tots too. “I make a lot of Lorenzo’s bags for school,” she shares. “I love making Giovanna’s clothes.”

As for her own clothes, Nicole says for her, it’s all about comfort over style. Her favorite things in her closet right now are “her gym clothes, cause that’s all I wear,” she says — a far cry from the leopard-print mini days of yore. “If I could wear gym clothes while filming, I would.”

And after filming? At the rate she’s going, we suggest her own retail empire. After all, Nicole says her career muse is none other than Miss Jessica Simpson. “I definitely look up to Jessica Simpson,” she says. “She doesn’t try to be something she’s not. I love the fact that she can just be herself and not try to be so professional — that’s not her. She’s still herself, she’s just (really!) successful and doing great.”

While she admits there are days when she’d love nothing more than to stay at home doing nothing at all with her brood (or maybe Netflix binging — Nicole shares that she loves “weird shows about zombies, aliens or ghosts”), she says it’s all about resolve when it comes to success. “If starting a business is your dream, you’ve got to keep working,” she says. She likens it to getting in shape. “If you want to lose weight, there’s no magic pill you can take,” she tells us. “It’s all about working hard and having the determination to make it work. You’ve got to be determined and not a quitter.”

“I think growing as a person is great. I evolved and I grew,” she muses. But that doesn’t mean she’s not still the same girl we’ve all come to know and love. “I still consider myself a hot mess,” she says. “I’m just a more responsible hot mess.” Amen!

Lovin’ Nicole’s turn as a creative? Check out more Stars Who DIY on Pinterest.

Nicole Briese
Nicole is the weekend editor for Brit + Co who loves bringing you all the latest buzz. When she's not busy typing away into the wee hours, you can usually find her canoodling with her fur babies, rooting around in a bookstore, or rocking out at a concert of some sort (Guns N' Roses forever!). Check out all her latest musings and past work at nicolebjean.com.
DIY Basics
Home News
DIY Basics DIY Projects Makers