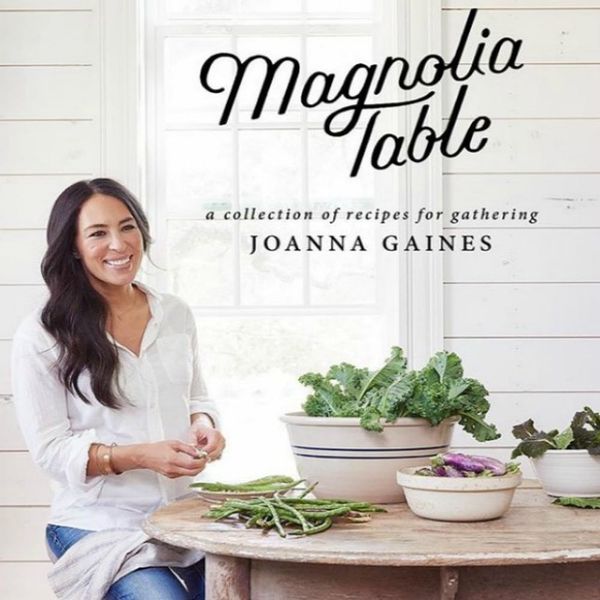 Joanna Gaines might be known for transforming houses, but now the Fixer Upper queen is upgrading your dinner repertoire with her forthcoming cookbook, Magnolia Table: A Collection of Recipes for Gathering ($30), set to release on April 24. In case the name sounds a little familiar, it’s the same name as the restaurant she’s opening with her husband Chip in Waco, Texas. (P.S. Don’t miss her preview of all the dishes).

I finally get to share my new cookbook, Magnolia Table with you all! It will officially be out April 24th, 2018 just in time for Mother’s Day, but you can order it in advance today should you want to gift a pre-order this holiday season or if you want to ensure you get one hot off the press! Read more about it and get a few early recipes on my blog today! Link in profile. #MagnoliaTableCookbook

According to Magnolia, the Gaines’ blog, the opening of the restaurant and cookbook release go hand in hand. In a post from December Joanna wrote, “If you’ve been following along on Instagram, you probably realize that Magnolia Table is also the name of our restaurant, which opens in the Spring of 2018. It’s safe to say that with recipe testing for the restaurant and the cookbook, I’ve definitely not gone hungry.”

In the blog post, Gaines went on to say that the cookbook is full of dishes she cooks at home for her friends and family. As well, the cookbook features recipes from the restaurant including small plates, snacks, and desserts. She’s even teased the book by providing three full recipes: Green Beans Amandine, Becki’s Mac and Cheese, and Scalloped Potatoes. It will also include 125 recipes with personal stories sprinkled throughout its pages. For example, she recently Instagrammed a batch of chocolate chip cookies with quite possibly the biggest chunks of chocolate inside. The mother of four (almost five) made them in the wee hours of the morning after a case of pregnancy cravings.

Woke up this morning at 2:30 AM and was craving fruity pebbles, a pimento cheese sandwich, chicken spaghetti, deviled eggs, and ranch dressing. Didn't have any of that so I made myself some cookies. With all the restaurant's final tastings, the cookbook (yes these cookies are in it!), and this pregnancy-I'm definitely growing at a record rate👌🏽#magnoliatable

Delish reports that there are at least three more sweet treats in the book in the form of homemade candy that we’re sure her kids devoured. You will too with options like homemade chocolate-covered peanut butter sandwiches, chocolate-covered clusters of nuts, and Rolo-topped pretzels. Clearly, the expecting mommy loves chocolate, and we’re *SO* here for these chocolatey recipes.

Which recipes are you most excited about? Let us know @BritandCo.

Yasmein James
Yasmein James is a food writer living in New Jersey, but her heart’s on the other end of The Lincoln Tunnel. When she isn’t writing, you can find her eating her way to the most authentic ethnic restaurants in her travels. And writing all about it on her lifestyle blog, She’s Facing Freedom.
Books
Food News
Books Foodie Kitchen
The Conversation