15 Next-Level Mac and Cheese Recipes Worth the Splurge 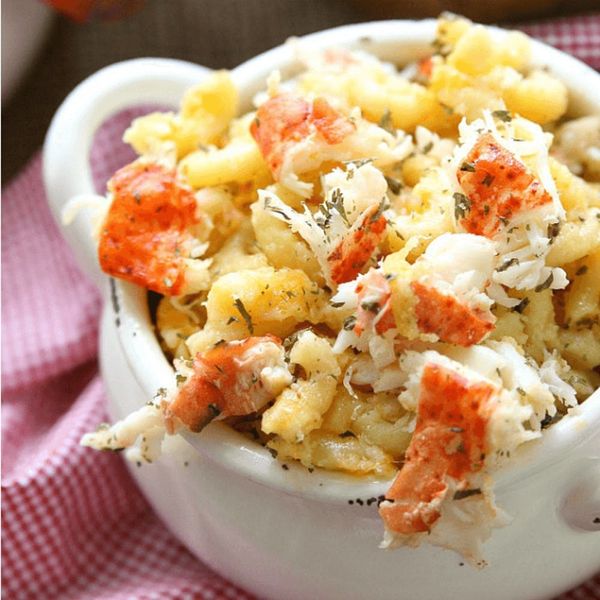 We know you thought mac and cheese was your boyfriend, but there’s a new love in town. The classic mac has gotten a major upgrade with rainbow mac, fried mac, jalapeño popper mac, mac pizza, mac pancakes, grilled mac ‘n’ cheese sandwiches and, yes, even a highfalutin’ lobster mac — OOH LA LA! If you’re already salivating at the thought of these craaaazy mac concoctions, keep scrolling for *the* most outrageous mac and cheese recipes you’ve ever seen.

1. Skillet Mac and Cheese (Pizza Style): Oh em gee — it’s everyone’s two faves, pizza and mac and cheese, cooked up in a single skillet. This double-delicious dish will get thumbs up from even the pickiest eaters at the table. (via Heather’s French Press)

2. Lobster Mac and Cheese: This homemade mac and cheese is made the old fashioned way, with a floury roux-based cheese sauce. The combination of cheddar and Parrano cheese is extra tangy, and pairs just right with the lobster. Your tastebuds will thank you for your trouble. (via Amy in the Kitchen)

4. Four-Cheese Caprese Mac and Cheese: This recipe is so simple, yet *so* delicious. Take your basic mac and cheese and load it up with four cheeses — cheddar, mozzarella, Havarti and Brie — then top with a fresh basil pesto and some heirloom tomato slices. It’s everything you ever wanted in a mac and cheese: creamy, luscious and OH-SO-good. (via Half Baked Harvest)

5. French Onion Mac and Cheese: Vidalia onions are spilling over at the greenmarket, and this soup takes full advantage. Everyone knows the best part of onion soup is the cheese, right? But let’s up our game by adding macaroni and cheese, to turn this soup into a tasty meal that’s deeply satisfying. (via Hungry Couple)

6. Gluten Free Mac and Cheese With Zucchini Noodles: This one’s for all the GF peeps in the house. This mac and cheese comes with a delectable sauce made of Greek yogurt, mozzarella and Parmesan cheese that’s served over zucchini noodles. This low-carb, low-cal copycat clocks in at just 250 calories and tastes out of this world. (via Food Faith Fitness)

7. An Irishman’s Mac and Cheese: Okay, we promised you crazy, and this dish can bring it! Imagine an Irish colcannon with bacon, kale and potatoes in a scrumptious mash-up with a traditional mac and cheese. And if that’s not outrageous enough, top it off with a crumbled mound of potato chips before serving. Bookmark this one for St. Paddy’s Day and you’ll be the hit of the party. (via Half Baked Harvest)

8. Bacon, Mac and Cheese Melt: Mac and cheese brings this grilled cheese with bacon sammy to a whole new mind-blowing level. It makes a perfect second-day lunch when you’ve got some leftover mac and cheese in the fridge. (via Real Food by Dad)

9. Mac & Cheese Burgers: Look out, Juicy Lucy, you are about to be out-ranked. You can’t get any better than a burger stuffed with cheese, unless it’s stuffed with mac and cheese of course. Invite some Insta-friends when you make this, because you’re gonna want witnesses to document this food-porn-worthy spectacle. (via Just Add Hot Sauce)

10. Fried Mac and Cheese: Because everything tastes better fried, this TGI Friday’s copycat calls for homemade mac and cheese to be chilled, formed, then dipped in egg and covered in breadcrumbs before hitting the fryer. Golden brown, crusty and oozing cheesy goodness, these bites won’t last a minute — so you’d better make a double batch for that next BBQ. (via Spicy Southern Kitchen)

11. Bacon Mac and Cheese Bites: These appetizers are easy to make and bacon-anything is always a crowd pleaser at parties. Bonus: They can be prepped ahead of time and warmed up right before serving. (via The Gunny Sack)

12. Macaroni and Cheese Pancakes: Mac and cheese pancakes, isn’t that some sort of crime? We’ll plead the fifth — all we know is these three-cheese mac griddle cakes are browned to a crisp and incredibly delicious. The best part? There’s a hidden veggie in the batter, but no one will ever know! (via The Breakfast Drama Queen)

13. Rainbow Mac + Cheese Recipe: Homemade cheese fondue is drizzled over dyed pasta and served up in a wild spectrum of color across your plate. Get ready to dig in and taste the rainbow. All the kiddies — big and small — will love this one. (Brit + Co)

14. Jalapeño Poppers With Mac and Cheese Cheetos: These poppers are stuffed with cheesy macaroni, then covered in crunchy Cheetos and doused with melted cheese. SWOON. Have some ice cold beer handy, because these things are addictive and the jalapeños pack a punch. (via Foodness Gracious)

If you’re swooning over these crazy good mac and cheese concoctions, there’s more where that came from. Follow us on Pinterest.

From Your Site Articles
Related Articles Around the Web
Sally Jones
Sally Jones is a writer and editor living in New York City. She has worked at many websites including iVillage, Ladies Home Journal, More, Parenting, Cosmopolitan, The Knot and YourTango, in jobs ranging from editor to COO. Renovation and interior design are her unhealthy obsessions hobbies. She has renovated every home she's lived in, including the rentals, and like... whoa, who does that? You can catch her at her blog Renov8or.
Comfort Food Recipes
Recipes
Comfort Food Recipes recipe roundup
The Conversation
Reviews:
More From Recipes