All the Dos and Don’ts of Jogging With a Baby 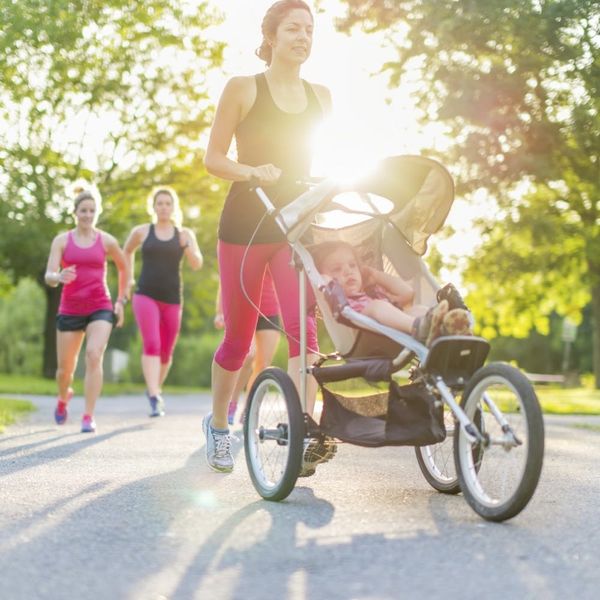 Having a baby is a big deal. Huge. No matter if you’re a first-time parent or adding a new one to the family tree, a little one brings joy to any family. But after the baby shower is over and you’re in the middle of finding your new normal, it can be hard to get back into the swing of many pre-baby activities — like working out. Helping your new baby get stronger is a priority, of course, but sometimes Mom wants to join in on the exercise fun too. And that’s exactly why we caught up with Kathleen Leo — fitness instructor and owner of Iron Moms, a stroller running and cross training fitness group based out of Houston — to tell us everything we should AND should not do when we’re jogging with a baby.

Do use a stroller designed for running: Not all strollers are created equal, according to Kathleen. “Almost all running strollers have shocks and air-inflated grip tires for surface running, while walking strollers have tiny plastic tires and are not smooth when you’re rolling at speed.”

Don’t convert baby to an upright seat too soon: Neck control is key here. Kathleen says, “My guideline for moms is the seat can be at upright position when baby can sit up alone; until then they need to be in a car seat or the normal seat needs to be declined. My BOB stroller’s guideline is eight months in the rear-facing car seat.”

Do research your stroller brands guidelines for infants: And do this before you buy a car seat, if possible. Some strollers can equip only certain car seats. Kathleen adds, “If you don’t plan on using a car seat, the stroller seat needs to be able to decline to almost flat for infants without head control, and head padding is a must. As their necks become stronger, you can raise the incline of the seat. I personally have a Jeep brand single stroller that does not have a snack tray or ability to equip a car seat, and a double BOB which I used when I had my second child. I could clip my infant into one side of the BOB stroller in my Eddie Bauer car seat while my older child sat forward-facing.”

Don’t forget about the environment: “Netting over the stroller will keep those gnats, flies and mosquitos out of baby’s face,” says Kathleen. Plus, major retailers sell generic stroller netting for under $10. She adds, “SPF-50 sunscreen should be worn by baby even if you extend the sun canopy of the stroller.”

Do stick to solid surfaces, concrete, asphalt and packed sand: You most definitely can run while pushing the stroller through gravel or grass, but hidden deep places or dips pose a threat of dead-stopping or tipping the stroller and causing danger to baby. Kathleen says, “Dead stopping is not as dangerous as tipping. Even while wearing the harness children get tossed around, since the seat incline on strollers is just gravity-assisted. Forward momentum or upending of the stroller will cause the seats to fling forward and your child with it. Rough off-roading is a definite no-no with infants.”

Don’t run on a sidewalk with a sideways tilt: Unless, of course, you’re really only working on toning one single tricep. Kathleen says, “It is so fatiguing to keep a stroller pushing straight when it just wants to roll to one side or another. Think of a shopping cart that pulls left — now put the most precious thing you own in that cart and run with it. Not a good idea.”

Do plan your route beforehand: “Routes that were fine as a jogger can be a nightmare for strollers,” says Kathleen. “Broken sidewalks, busy streets, tilted sidewalks, cars parked on their driveways that block the sidewalk, low places that collect water — you’ll discover your own list of annoyances. Try walking with the stroller in some areas first before you take baby out with you.”

Don’t expect to run in silence: It’s probably safe to assume you won’t do much in silence anymore, but “pushing the stroller — running especially — is one of the fastest ways to quiet a cranky baby. However, sometimes they just won’t be settled; they’re hungry, hot, tired, bored or whatever the issue. It’s up to you as a parent if you think breaking is warranted,” Kathleen says. “I generally use a triage approach — are they in physical pain, how much longer until I planned to stop anyway and can I take care of this problem without stopping? In the end, it’s a judgment call, but don’t get frustrated when your runs are not the same as they were pre-baby.” What’s Kathleen’s one dependable trick for quieting kids in a stroller? “Bring snacks.”

Do pack a clip-on fan or extra blankets, depending on the weather: “Rear-facing car seats don’t have the benefit of a headwind while running, so a clip-on fan keeps the air moving around baby,” says Kathleen. “Same for extra blankets. Babies lose heat fast. You’re running and feel hot, but remember that they’re stuck in a seat, possibly with wind blowing on them, making it even cooler.”

Don’t run with earphones in both ears: It’s probably good advice for running without baby too. “You need to keep one ear open for traffic and other pedestrians,” Kathleen notes. “Tuck one side in your sports bra if you’re using earbuds and skip traditional headphones all together. Everyone’s favorite is to listen over a Bluetooth speaker, but you may need to change up your playlist.”

Tweet us if you run with baby or not @BritandCo!

Kelsey Nelson
Kelsey Nelson is a born-and-raised Ohioan living life in South Carolina. She thrives at binge watching Netflix, contemplating what to order at the bar and running any trail or road she can get her feet on. In addition to being a Brit + Co contributor, she writes about southern pleasantries, DIY mishaps and more at North Living South. If she isn’t writing or running, she’s off adventuring with her husband Brad and their Lab/Dachshund mix, Gordy.
Fitness
Health
Fitness Healthy Living Womens Health Workouts
More From Health