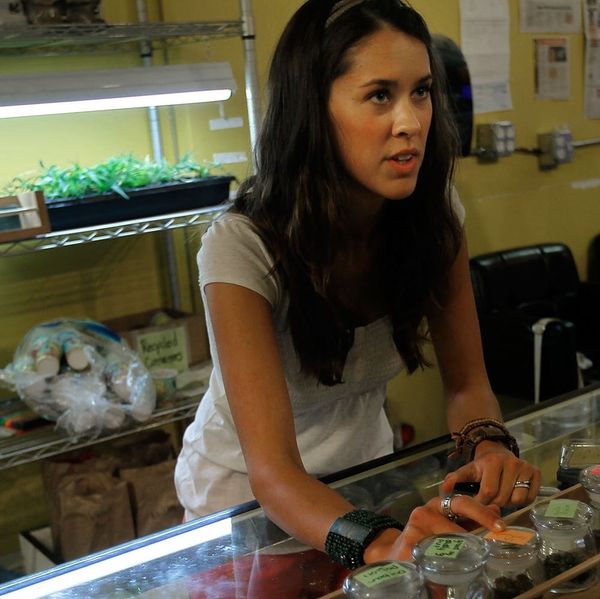 The times, they are a’ changin’, folks.

First, Sex and the City alum and New York State gubernatorial candidate Cynthia Nixon announced the legalization of marijuana as a key component of her platform last week. Then, last Friday, former House Speaker John Boehner announced he had joined the board of Acreage Holdings, a company that cultivates and distributes marijuana in 11 states.

I’m joining the board of #AcreageHoldings because my thinking on cannabis has evolved. I’m convinced de-scheduling the drug is needed so we can do research, help our veterans, and reverse the opioid epidemic ravaging our communities. @AcreageCannabis https://t.co/f5i9KcQD0W

We all know that politicians are generally years behind what the general population is thinking and feeling, so it should come as no huge surprise that a Gallup poll from last October found that 64 percent of Americans are now in favor of legalization, including 51 percent of Republicans and a whopping 72 percent of Democrats.

Yes, we seem to be at a turning-of-the-tide moment when it comes to the legality of taking hits from the bong. As of this year, marijuana is legal in nine states and Washington DC — no medical slip required — and medical marijuana is legal in 29. And though it’s still considered a Schedule I banned substance at the federal level, the way things are headed, that may not be the case for long.

So what does this mean for marijuana? As the scales tip in favor of legal sales, how is pot going to change? Namely, how does legalization affect the quality and price of Mary Jane?

While dealers on the black market might say otherwise, most experts agree that the quality and consistency of weed gets a whole lot better when it’s legal.

“Prohibition means no quality control,” explains Troy Dayton. He’s the CEO of the Arcview Group, a group of investors dedicated to the legal cannabis industry. Dayton says that when so much energy and capital is being spent concealing the industry’s very existence, quality takes a back seat. It also makes it much harder to find the top talent.

“When it’s legal, you can call the top people in the industry, the top agronomists, for example,” says Dayton. “There is a lot more sharing of information and technology.”

Marijuana on the legal market also usually bears more detailed labels so customers can choose specific strains. The drugs are also more specifically targeted, so a client with anxiety will likely walk out of the store with a very different product than a customer who is looking for an energy boost.

The growing proliferation of medical and legal marijuana in the US has also given rise to the popularity and availability of marijuana products that are not the actual, smokable flower. Edibles are more popular than ever, as are oils and concentrates.

It also follows that legal marijuana is safer. An investigation by Canada’s Globe and Mail newspaper found that marijuana sold at dispensaries — stores operating in a legal grey zone — was far more likely to contain bacteria, mold, and pesticides than weed purchased from one of Health Canada’s medical marijuana producers, which is legal, tested and regulated.

With legalization, quality and safety increases, but often, so does price — at least at first. In California, customers freaked as prices jumped from around $25 for an eighth of an ounce to $40 when recreational marijuana became legal, thanks to taxes as high as 45 percent.

“In California, you are moving from a wild west scenario,” says Dayton. “Regulatory schemes are changing rapidly, and there are so many stakeholders,”

He says Colorado is a good example of a state that got it right. Marijuana has been legal there for four years, and though they also experienced an initial price jump, a simple, relatively low tax rate and an established medical marijuana market meant that the price quickly dropped.

But even with the best pre-existing conditions, the fact that marijuana is illegal at the federal level means that dispensaries in legalized states must jump through all kinds of expensive hoops to get their products to market.

Banking services can become prohibitively expensive or difficult to obtain for these businesses because banks subject to federal regulations are reluctant to work with companies that are technically illegal at the federal level. Marijuana businesses are also subject to a federal tax code known as 280E. It prevents them from claiming a whole whack of tax deductions and credits any regular business would be eligible for, further driving up the price.

It seems that until marijuana is legal at the federal level, retailers in legalized states will face all kinds of challenges to get their product to the customer at a reasonable price.

But that pot lover’s dream of federal legalization may not be so far away.

“This issue is moving so fast, and politicians are noticing the benefit of coming out in favor of legislation,” says Dayton. He points out that in Illinois, two candidates are fighting over who is more pro-legalization.

“It’s like, pinch me, is this happening?” says Dayton.

As for John Boehner, Dayton can hardly believe it.

“It’s one thing for an elected official to come out in favor of legalization, or even a former elected official. It’s another for a Republican former speaker of the house to join the board of a company that sells marijuana,” says Dayton with a laugh. And it’s not just Boehner and Nixon. Senator Mitch McConnell introduced a bill to legalize hemp. Warren Hatch attacked Jeff Sessions for stopping medical cannabis research.