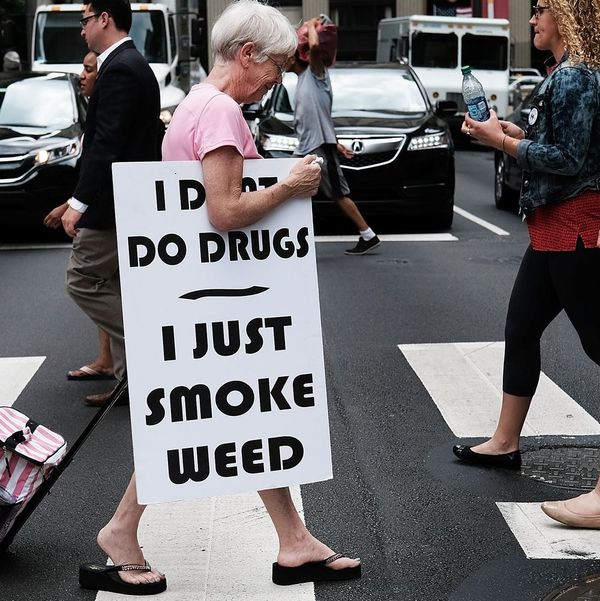 With eight states now offering legalized marijuana sales and usage, it looks as if Americans might be on board with legal pot access from coast to coast. A new Gallup poll reports that 64 percent of respondents are in favor of marijuana legalization across the country — a record high.

Over 1,000 randomly selected adults 18 and older, across all 50 states, were polled between Oct 5-11 to determine attitudes about marijuana legislation. The results showed a four percent increase in affirmative responses over the 2016 results.

Gallup has been asking people their feelings on legalizing weed since way back in the 1960s, when only 12 percent of the populace wanted to see the drug decriminalized. By the ’80s, that support doubled to 25 percent, but didn’t really see a major increase again until the start of the new millennium, and has been on a steady increase ever since.

For people still opposed, arguments against marijuana legalization include the (thoroughly debunked) idea that weed can be a “gateway drug” to stronger, more potentially dangerous narcotics, and that it will be bad for both our health and the economy.

Those who are pro-legalization are quick to point out that besides the health benefits that can be derived from the drug (including CBD oil, which purportedly helps manage symptoms of anxiety), the states that have legalized the drug are making money from taxes hand over fist, thus supporting greater social efforts and infrastructure projects in their states.

Gallup also notes (somewhat surprisingly) that Republicans are now in favor of marijuana legalization for the first time since polling began on the subject. The GOP has historically been a pro-prohibition party.

While the current administration has been outwardly opposed to a federal effort to legalize weed, states that have done so have helped turn the general population’s minds in favor of legalization. It should be noted, however, that regardless of state-level legality, Attorney General Jeff Sessions is actively working on cracking down on those states that have lifted marijuana bans.

Are you for or against marijuana legislation? Tell us why @BritandCo!