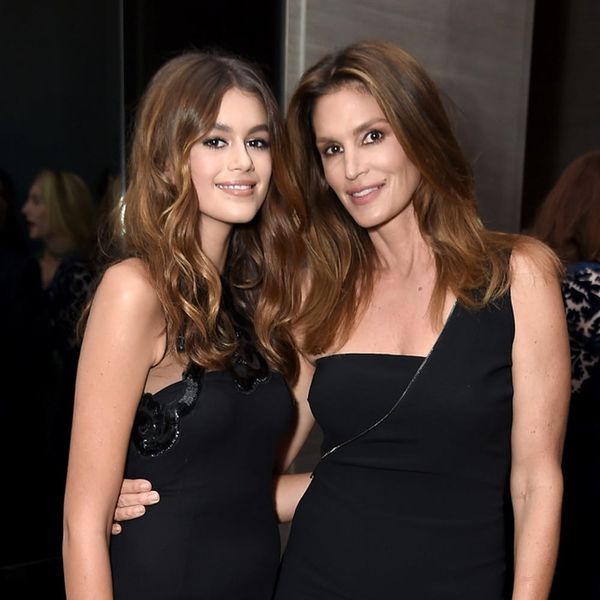 When celebrity children become celebrities in their own right, it’s hard not to see the resemblance between them and their famous offspring. This is especially true for model children of model parents. Kaia Gerber is no exception, and as her model fame grows, comparisons continue to be made. The model on the rise just posted a picture featuring new bangs, making the lookalike buzz start all over again.

Although Gerber is just 15, she has made a name for herself in Young Hollywood, all while learning from her seasoned pro of a mom. And that’s not all. Although she’s taking her own hair cues, every time she switches it up, the mother-daughter resemblance resurfaces.

Gerber posted the photo of her new chop to Instagram with the caption “coming soon,” presumably teasing a new project. Followers instantly identified the hairdo as a doppelganger do. Some even had to take a second look.

One commenter, @ezra.louis.eusuff said, “For one sec, I thought that was a throwback pic of your mother!” Another, @ina.mulI said, “Legit thought this was Cindy.” Most just noted that her mom’s genes are strong. @bellaandmolly68 said, “Looking very much like mom in this pic!” Many agreed. @jo.landa.jo remarked, “Young Cindy,” and @alondraalbert said, “just like your mother.”

When getting ready is almost as fun as the party! Thanks for the glam @HungVanngo and @JenAtkinHair. #MJBxKAIA

Other well-wishers hope Kaia’s good looks bring her as much success as her mom has seen in the industry. @beachdwlr noted, “The resemblance between you and your mom is amazing! I hope your career is as long and successful as @cindycrawford.”

Working those "MOM GENES" for a good cause! We love being involved with @BestBuddies — and we're really excited to launch this tee in support of their incredible work. Link in my bio for more!

The model teen might not be able to escape constant comparison, but for now, it doesn’t seem like she minds.

Do you see the resemblance? Let us know your favorite mother/daughter celeb duo @BritandCo!

Elyse Roth
Elyse Roth is a freelance writer and editor who is a midwestern transplant in NYC. She loves to explore the city, plus you can find her at a Broadway show or the ballet usually once a week. When she's not finding things to do in New York, she's thinking about where she can travel next. She's combined her love for food and TV into a blog where she makes food eaten on her favorite TV shows at tvdinnerblog.com.
Bangs
Hair
Bangs Celebrity Hair Instagram
More From Hair