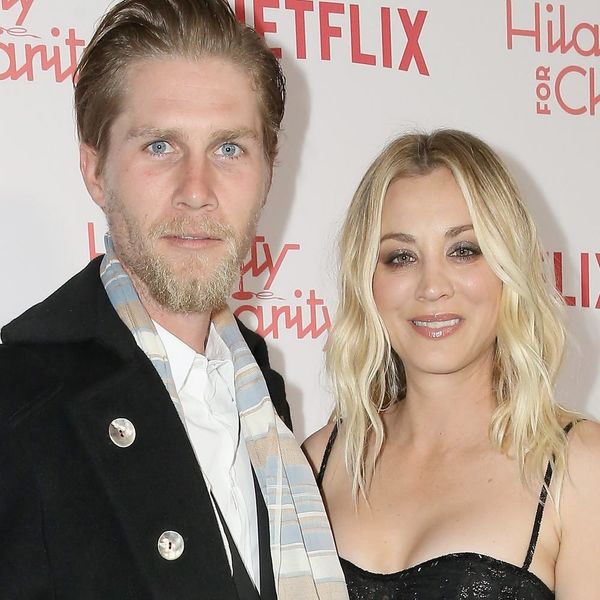 Kaley Cuoco closed her weekend out with a Big Bang. The actress said her (hilarious!) “I Dos” with fiancé and professional equestrian, Karl Cook, at a horse stable near San Diego, California, this weekend in not one, but two stunning lace pieces fit for a princess.

For her walk down the aisle, the 32-year-old bride and her stylist, Brad Goreski, chose a jaw-dropping lace Reem Acra gown with hand-sewn flowers. It was the matching cape that set it apart, however, making the look fresh and modern.

She posted a photo of herself sharing a kiss with her new husband in the dress, writing, “Legally KC SQUARED. 6-30-18.”

The RL Penny followed it up with a second shot from the couple’s reception, in which she wore a lace bridal jumpsuit with a deep V neckline by Tadashi Shoji with Louise et Cie kicks. She also traded her floral-adorned updo in for a fun and flirty pony.

The couple of two years became engaged last December with a tear-filled proposal for the books.

Who knew my prior post was oracular. Well after nearly two years I finally got up the courage to ask her to marry me. This is the best night of my life and I think the video shows it is the best night for kaley as well.....if she said yes!!!!!

As seen in a video uploaded to Goreski’s Instagram stories, their vows were no less endearing, with Cook admitting that he understands his now-wife plucks his unibrow out of love and promising to destroy any insects that may that fly into their home. Cuoco, in turn, revealed that she struggled to write her vows for a rather sweet reason. “There really were not enough words to describe how I really, truly feel about you,” she said.

What do you think of Kaley’s bridal jumpsuit? Sound off over @BritandCo.

Nicole Briese
Nicole is the weekend editor for Brit + Co who loves bringing you all the latest buzz. When she's not busy typing away into the wee hours, you can usually find her canoodling with her fur babies, rooting around in a bookstore, or rocking out at a concert of some sort (Guns N' Roses forever!). Check out all her latest musings and past work at nicolebjean.com.
Celebrities
Wedding Style
Celebrities Celebrity Couples Celebrity Wedding Summer Weddings Wedding Style Weddings
More From Wedding Style