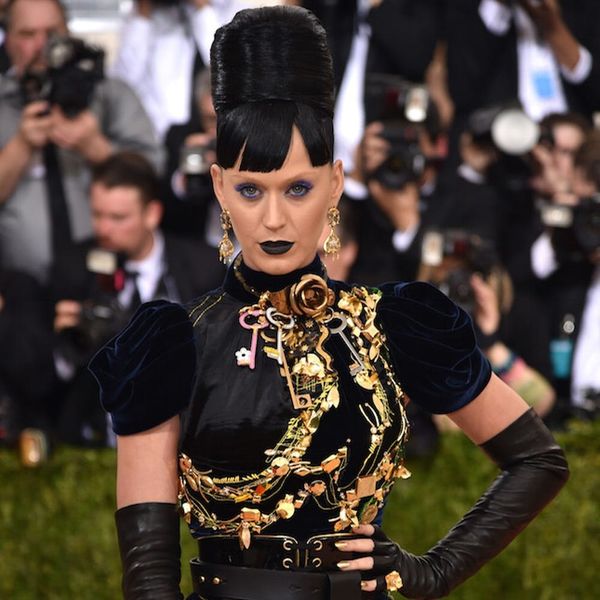 From lots of Met Gala goodies to the actual prettiest cat who has ever existed, check out six of today’s top news items below!

1. Everyone else’s accessories are irrelevant because Katy Perry and Orlando Bloom wore matching Tamagotchis to the Met Gala. Taking a bit of a jab at the night’s theme of Fashion in Technology, the couple added the small, subtle touch to their Gala outfits. “I’ve had two Tamagotchis located in Connecticut and I just feel a little like…like I’m in tech but I’m not playing your game,” Katy told People. “But I’ve been keeping these bitches alive since ’96!” Katy is known to bring a little nostalgic flair to the red carpet, admitting proudly that she had a Bump-It in her hair at the Golden Globes back in January. Now if only they’d walked the red carpet with Devil Sticks… (via People)

Soooo...instead of changing into a #MetGala Afterparty dress, @BrandonMaxwell cut my gown into mini ✂️🙈

3. Annnnd Karlie Kloss literally cut her dress off of herself for her Met Gala afterparty look. “Soooo… instead of changing into a #MetGala Afterparty dress, Brandon Maxwell cut my gown into mini,” Kloss wrote in the Instagram video caption of the carnage. “We’re drinking and we’re cutting,” Maxwell said in the clip with Kloss responding, “This is a bad idea.” *Thinks about taking scissors to an expensive gala gown, cries forever*

4. Sorry Beyhive, but Rita Ora just shut down the “Becky with the good hair” rumours. Rita has denied that Bey’s infidelity claims on Lemonade at all involve her, and last night at the Met Gala she took a selfie with none other than the Queen Bey herself, Snapchatting with the caption “Family” and a heart emoji. Is it all an elaborate marketing ploy?! Will we ever know??

5. Smoothie the cat was NOT at the Met Gala but is the Internet’s newest (and cutest) feline obsession. And we can see why. Is this the most beautiful cat that has ever existed? Why is it so perfect?? “I started this Instagram account because I was posting too many pictures on Facebook, and my friends were complaining (“Another cat pic, really?”),” owner Arvid van Boekel tells The Huffington Post. “But I just had so many nice pictures, that I wanted to share with the world. In a few months Smoothie gained a lot of followers all around the world.” WE LOVE YOU SMOOTHIE. (via The Huffington Post)

6. Quote of the day: “I plan to keep working for as long as I am healthy.” 92-year-old Madam Goh Gwek Eng, otherwise known as McDonalds’ oldest employee. (via Straits Times)

Do you ever fantasize about retirement, or do you also plan on working as long as you can? Let us know @BritandCo!