This Keto Churro Cloud Bread Recipe Is a Dream 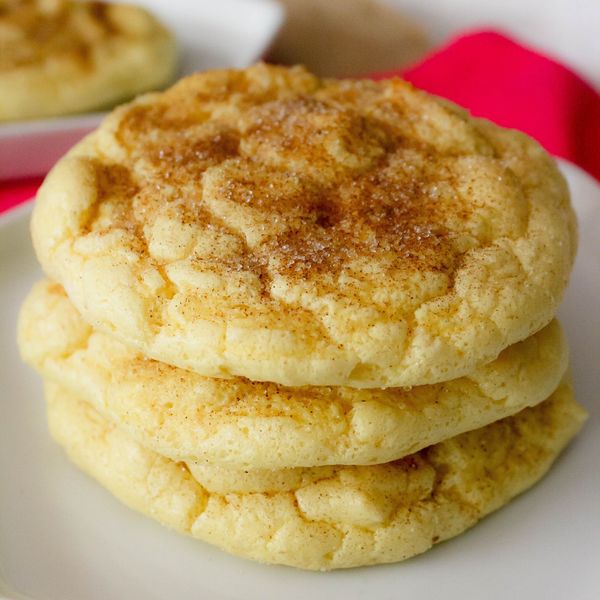 Add the egg whites and cream of tartar to a stand mixer and mix on high until stiff peaks form. Set aside.

In another bowl, add the cream cheese, 1/2 tablespoon monk fruit sweetener, and 1/2 tablespoon cinnamon. Blend and add one egg yolk at a time until incorporated.

Gently fold the egg yolk mixture into the egg white mixture, careful not to deflate the whites.

Use about 1/4 cup of the mixture per piece of bread. Spoon into 4- to 5-inch rounds on the lined pans, about 1 inch thick.

Bake for 10-12 minutes or until lightly golden.

As the bread bakes, combine the remaining monk fruit sweetener and cinnamon in a bowl.

When the bread is done, remove from the oven and brush the tops lightly with water. Sprinkle the sweetener-cinnamon mixture over each. Serve once cooled.

Patricia Conte
Patricia is a freelance writer, social media ace, and food blogger who loves to cook and eat. She grew up surrounded by her Italian immigrant family who treated even everyday meals as a celebration. You can read more of her work on her blog, Grab a Plate, where she shares her experiences and recipes that help make each meal memorable. Patricia is a lifelong Cleveland Cavaliers fan originally from Akron, Ohio, and now lives in the desert Southwest of Phoenix, Ariz.
Healthy Recipes
DIY Recipes
Healthy Recipes low-carb Low-carb #NotCheating
The Conversation
Reviews:
More From DIY Recipes