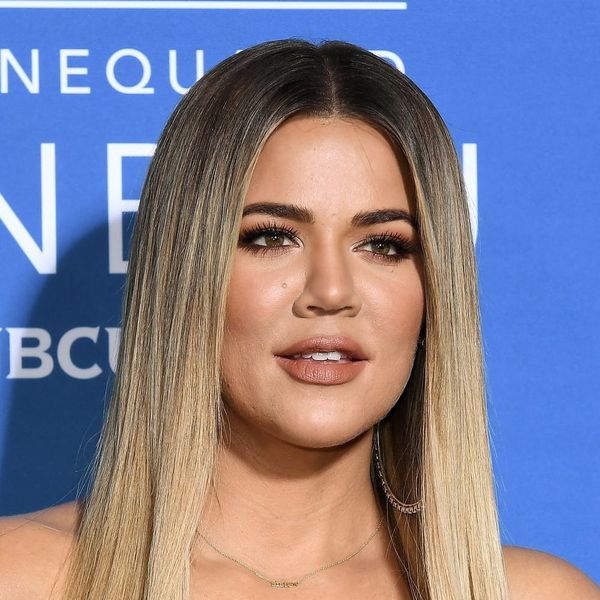 Khloé Kardashian’s denim line, Good American, has had no shortage of success since its launch back in December. It sold a whopping $1 million worth of jeans in its first day alone and has continued making bold fashion statements (and big sales!) since, thanks to unique pieces like jeans with built-in fishnets and a retake on the Texas tuxedo. But now, the brand is in the news for all the wrong reasons as a young independent designer has accused Kardashian of stealing her creations.

Destiney Bleu, who has dressed everyone from Beyoncé to Fifth Harmony in her super sparkly, super sexy Dbleudazzled unitards, stockings, socks, and more, took to Twitter to accuse the 32-year-old Kardashian sister of buying her pieces only to copy them and call them her own.

When someone buys 1 of everything on your site, has you make them custom @dbleudazzled work, never posts it or wears it, then copies it. 🙃 https://t.co/hylp6fcOdh

“When someone buys one of everything on your site, has you make them custom @dbleudazzled work, never posts it or wears it, then copies it,” Bleu tweeted, sharing a link to a Good American promo video Kardashian posted on her page. The young designer went on to say that “every sister in the fam owns all of my tights” and that she was “super excited when her sisters used my pieces in their lookbook, not realizing they were also passing it off as their own.”

She continued on, sharing side-by-side snaps of her designs next to Kardashian’s with the tag “#NoFrauds.” Bleu also said that she had reached out to the reality TV star’s assistant prior to calling her out on social media and received absolutely no response.

A rep from Good American released a statement to Brit + Co following the incident, saying, “Under no circumstances did Good American or Khloe Kardashian infringe on another brand’s intellectual property and we are going through the proper legal channels to handle the situation.”

The “situation” is a rather ironic one, considering that it was just several days ago that Kardashian was dealing with her own theft issues, saying that a friend was actually stealing from her.

I didnt speak up for attention or $. Im trying to be a voice for indie designers who are stolen from because its the right thing to do.

Bleu, for one, didn’t appear to be buying the brand’s words, clarifying that she’s not surprised to see other bedazzled bodysuits on the market (Good American Tweeted that Britney Spears’s crystal suit in “Toxic” was its inspo), but that “the issue is that it was purchased with the intent to copy for profit.”

Dazzle is my livelihood. I pay 3 rents, 5 employees & handmake everything. I did it w/no investment or guidance, I'll always fight for this

Closing by saying that she would “always fight” when it came to her livelihood, it doesn’t seem like Bleu will be backing down any time soon. With no direct response from Kardashian as of yet, we’ll have to wait and see how this one plays out.

Do you think Khloé is in the wrong here? Tweet us @BritandCo.

Barbara Pavone
Barbara Pavone is a pop culture-obsessed writer based in beautiful (but ridiculously cold) Montreal, Canada. When she's not working, she's sipping on a Pimm's Cup and daydreaming about her celebrity hero, Saint West.
Kardashians
Style News
Kardashians
More From Style News