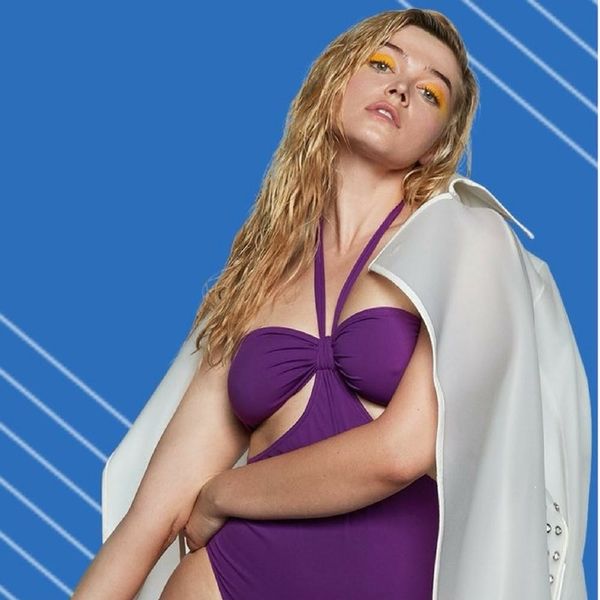 It would be an understatement to recognize that 2017 was a monumental year for plus-size folks in fashion. The fall 2017 New York Fashion Week saw a whopping 27 plus-size models take to the runway and strut their stuff for everyone from Christian Siriano to Michael Kors. Riding on that wave, Tyra Banks will be returning to host the 24th cycle of the VH1 series America’s Next Top Model and is being joined by noted plus-size model Ashley Graham as a judge. Among the models to compete for the titular prize is KhrystyAna, a 32-year-old body positive activist breaking the contest’s mold in both age and size — and someone whose success we’ve been watching with excitement.

KhrystyAna, who has a following of 87.5 thousand followers on Instagram, has become well-known for documenting her body image struggles online. From her difficulties with shapewear to her discomforts with the modeling industry, KhrystyAna’s candid and frank approach to sharing online has garnered her fans from all over the world.

“Being honest is something I’m learning about every day,” KhrystyAna admits. “I’m not entirely the most confident person, I’m only growing to know who I am and it’s a journey that I’m open to sharing with everyone.”

'PARTING WiTH PERFECTION' Farewell Perfection, that I will never be Long expedition was to follow you around I was at point A and you already at the B I thought you were so close, yet never have been found. I married you, because you sound like heaven. It planted hope that pushed me to the edge. For you committed I the deadly seven So only we could have the light on worldwide stage. So tailed I you but face of yours was hidden Why hide you, show me please at last The gossip whispers: "seeing you forbidden " For I would not be let to everlasting rest , For if I touch you heart mine decompose For if I smell you friends will turn away With that in mind, divorce shall I propose For living heart, good friends, and peace to stay. --yours, KhrystyAna /// perfection? An idea. An obsession. Let's forget it all together to only turn to the only reality. No dream can be more perfect than reality. Go have a gorgeous day, perfect you ....;)))) --- photo by @coryphoto

Having watched America’s Next Top Model since she was young, it had always been her dream to one day appear on the show. But she wasn’t sure if she would be able to meet the requirements, as all models needed to be under 27 years old to apply previously. They also needed to be American citizens, which KhrystyAna — an immigrant to New York from Russia — was not.

“By the time I got my citizenship, I was too old to apply and I gave up on my dream,” she tells us. But when, last spring, Tyra announced that the show would begin accepting models of any age, KhrystyAna knew she had to make the leap.

“I just went for it with all my passion, hoping I’d be chosen,” she recalls.

The road to ANTM hasn’t always been a smooth one. KhrystyAna has been candid on Instagram and in interviews about how she spent her early career cycling between wondering if she was “good enough” for the industry and questioning whether she was too curvy or not curvy enough. She also worried she was getting too old to make it as a model. It wasn’t until one day, when KhrystyAna got sick and tired of the negative voice inside her head, that she posted a photo onto her Instagram account that included no filters, no makeup and showed all of her rolls.

“The photo went viral and people preferred the real me as opposed to wannabe model that I used to want to be,” explains KhrystyAna. She decided then that she would not hide her imperfections anymore, no matter what others had to say. She realized the only negative voice bringing her down all along was her own.

Since then, KhrystyAna has continued to advocate for women of all shapes and sizes, even organizing her own guerilla-style show in the middle of Times Square in December, titled The Real Catwalk, a short three days after the Victoria’s Secret Fashion Show. The event featured over 20 models and didn’t hide any curves, wrinkles, scars, rolls, or thunder thighs.

“The media has made us believe that there is something wrong with us if we don’t look like a Victoria’s Secret model, but that’s one standard of beauty,” KhrystyAna explains. “Can’t we just be ourselves and maybe focus on respecting and loving our bodies?”

Will you be watching ANTM? Tell us @BritandCo!

Amanda Scriver
Amanda Scriver is a passionate storyteller and body image advocate based out of Toronto, Canada. When she isn't writing for various publications, she finds time to Keep Up With The Kardashians while partaking in life's greatest pleasure: the chip buffet. Don't ask her what her favorite restaurant is, it's complicated
Body Positive
Body Positivity
Body Positive Every Body Plus Size TV