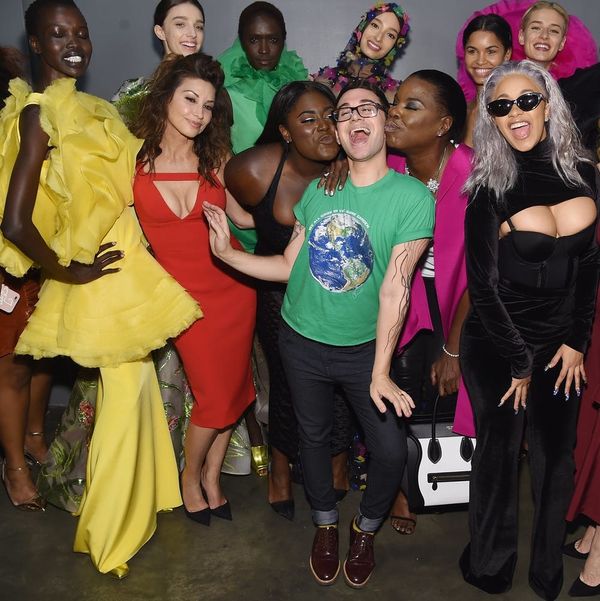 Project Runway’s youngest winner and fashion design icon Christian Siriano has always been known to be on the leading edge of fashion. Since launching his self-named label in 2008, the celebrity designer has made clothes for everybody. And this week, in an open letter penned for Teen Vogue, the reality show star is sharing his thoughts on diversity in fashion and why he’ll continue to build clothes for anyone who wants to wear them.

Hot off the heels of his flawless gown for SNL star Leslie Jones at this year’s Emmy Awards, Siriano wrote in his open letter that while his mandate has always been to create clothes for everyone, his passion for inclusivity has only gotten stronger in recent years.

“In the beginning, I just wanted to make clothes for women who wanted to feel and look amazing when they wore them: women who were excited about getting dressed,” Siriano writes. But as his definition of fashion has expanded, his clientele has grown, something that’s not lost on the designer.

Celebrating curves on the runway at our #spring2018 show! Love these looks! #chic #TBT 💚🖤💚🖤 Check out more from our collection on @11honore .com

At this year’s New York Fashion Week, Siriano’s runway models ran the gamut of representation: different ages, races, sizes, and genders, all strutting in different pieces from his S/S18 line. Siriano wants everyone to feel beautiful when they get dressed, he explains in his open letter, quipping, “Getting dressed should be one of the easiest and most exciting parts of the day. Self-expression is one of the greatest gifts of being human!”

And Siriano credits fashion as a way for everyday folk to continue fighting against injustice and hatred — two things we seem to struggle against daily. “Fashion is not superficial; it is a dynamic tool to transform oneself,” he explains, adding, “it can be used to command the attention of those around you.”

So excited!!!! #repost: Introducing our series of one-of-a-kind looks by @csiriano, inspired by his iconic red carpet moments. Through his inclusive and diverse designs, Siriano has become known for embracing body positivity and celebrating role models. See more details from these looks now in @barbiestyle's Stories! ❤️ #barbie #barbiestyle

Having partnered with everyone from Lane Bryant to Barbie, Siriano sees the escapism of fashion rooted in the everyday, and is excited that his original goal — to dress every type of person, allowing each individual to decide what makes them feel good — is something that’s becoming the norm in fashion.

“All people are beautiful,” Siriano concludes. “There is no correct size, shape, color, or age. As a creator of fashion, I celebrate the body that wears my work. What an honor to be chosen, to be appreciated, and to be seen. That honor extends in both directions.”

Kat Armstrong
Kat has been a writer, social media maven and mom for longer than she's willing to admit. She's also spent time in front of and behind the camera, interviewing celebs, politicians and acting as a producer for fashion and artistic photography shoots. When she isn't writing for various orgs and publications, she's hanging with her kids, husband and French Bulldog, Peter, in Toronto, Canada.
Body Positive
Diversity
Body Positive inclusivity