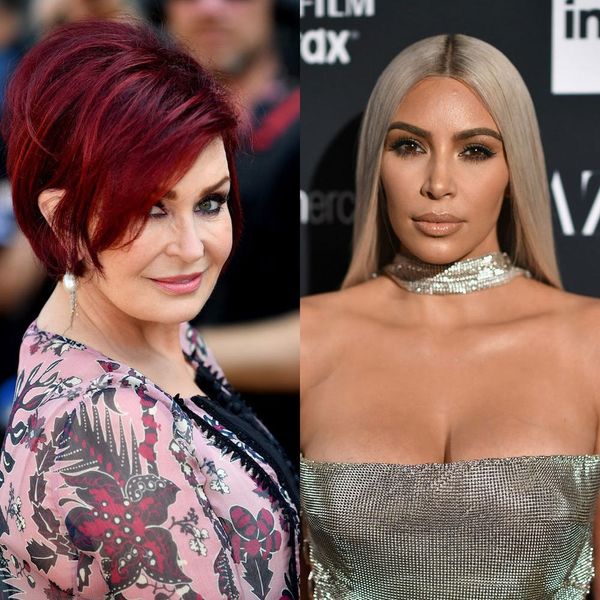 Sharon Osbourne has been in no mood to hold back lately — not that she’s ever really been one to keep her feelings to herself. During a recent interview with the UK’s Telegraph, she criticized Kim Kardashian West for sharing revealing photos. (She also spoke about her husband Ozzy’s multiple affairs, but that’s a different story.) The Keeping Up With the Kardashians star later responded to Osbourne’s remarks in an interview with E! News, which prompted Osbourne to speak about the “feud” on Monday’s episode of The Talk.

The drama began when Osbourne commented on Kardashian-West’s sexy selfies. “Kim says she’s doing everything in the name of feminism, but that’s not feminism! … If Kim wants to show off her body, fine,” The Talk personality said. “But that’s not feminism, that’s being a ho. And there’s nothing wrong with being a ho, but always remember what you are.” (It’s worth noting that when Osbourne posted her own nude selfie in 2016, she credited Kim K-W as the inspiration.)

Kardashian West caught wind of Osbourne’s comments and clapped back. “First of all, I think she said I said a quote about, ‘I post nude photos in the name of feminism,’” the KUWTK star told E! News while attending a Harper’s BAZAAR event on Friday. “[I] never said that.”

So honored to have been photographed by Mert and Marcus for their book new book! 20 years in the making! It's out Sept 7th #mertandmarcus @mertalas @macpiggott #taschen

She went on to say that opinions based on false facts are pretty silly: “I think when people misquote you and then comment, it just sounds ridiculous… so, she kind of misquoted me on that and I thought it just looked really, like, stupid.”

That might have been the end of it, but Osbourne addressed the drama on The Talk, saying her initial comments were taken out of context. “It’s so ridiculous how these things happen,” she began. “The Telegraph is a paper in England and I was doing this interview, and at the end of the interview, as the lady was leaving, she said to me, have you heard that Kim Kardashian has come out as a feminist?”

Osbourne continued: “Of course, I commented. She asked my opinion and I gave it. It wasn’t rude. It was like, fine, she poses nude, she’s very sexual in her clothes, even her everyday clothes… whatever she does, it’s showing her body, which shows that she’s a strong, grounded woman and she’s not ashamed of her body. She wants to show it, which is her business, nobody else’s business but hers. That’s great, but people have been doing that since day one and people have been stripping and whatever from day one, so it doesn’t make you a feminist, it makes you someone who is a strong person who is confident with their body and wants to show it. But that’s not a feminist. And it got misquoted when it came out — my response. And Kim came back and said, ‘I never said I was a feminist, so I never said I was and you’re responding to something I never said.'”

As for that “ho” comment? “Taking your clothes off, exposing your body, does not make you a ho,” Osbourne said. “It does not. That’s not fair. She’s not a ho, she’s a married woman, she’s a professional woman, and that’s it. She’s a strong woman.”

What do you think about Sharon Osbourne’s comments and Kim Kardashian West’s response? Let us know @BritandCo.