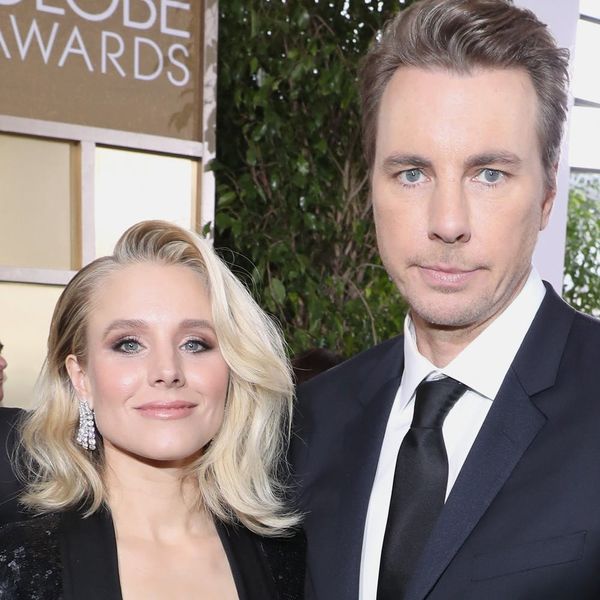 Celebs are willing to do some pretty out there things to maintain their image. Kim Kardashian West, for instance, famous for once airing her vampire facial, recently revealed that she even has a hair clause in her will to make sure her mane always looks good. Kristen Bell, on the other hand, managed to scare her husband of four plus years, Dax Shepard, with her nighttime skincare routine when he came to bed, only to find what he called “an electric monster in his bed.”

After exiting the bathroom, Shepard was surprised to find Bell, 37, suddenly all aglow in their bed. “I came out of the bathroom tonight and found this electric monster in my bed,” he jokingly captioned a video of his discovery.

Filming his illuminated partner in repose, he laughs while asking, “Will you please tell me [that] this is real?”

“This is real!” the Frozen 2 star proclaims while sitting up to give us a full glimpse at her glowing face.

“This is not a bit to scare the sh*t out of me, right?” Shepard confirms as the two burst into laughter.

Real, it was: The mask in question appears to be the Opera LED Face Mask (roughly $2,757 in USD), a “low-level light therapy LED facial mask” which uses three different wavelengths to do everything from produce collagen and improve skin elasticity (therefore reducing age signs and wrinkles), to killing bacteria (thereby reducing acne).

Bell’s not the only one wearing the futuristic looking piece, either. Far from it — Jessica Alba, Kourtney Kardashian, Kate Hudson, and Chrissy Teigen have all been using the mask for years

If it’s not exactly in your budget, however, we feel you, and so does Lena Dunham, who uses a similar, far-less pricey version of the device to get her glow on via the Neutrogena Light Therapy Mask ($20).

Just be sure to warn your significant other prior to using! *Wink, wink*

Have you tried a light therapy mask? What did you think? Sound off over @BritandCo.

From Your Site Articles
Nicole Briese
Nicole is the weekend editor for Brit + Co who loves bringing you all the latest buzz. When she's not busy typing away into the wee hours, you can usually find her canoodling with her fur babies, rooting around in a bookstore, or rocking out at a concert of some sort (Guns N' Roses forever!). Check out all her latest musings and past work at nicolebjean.com.
Beauty Products
Skincare
Beauty Products Celebrities Celebrity Beauty Celebrity Couples Skincare products