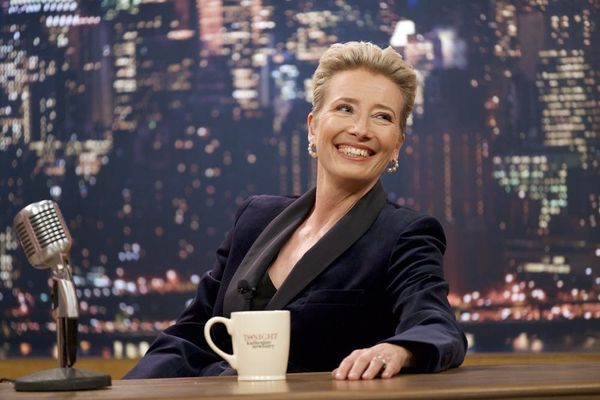 Thompson stars as Katherine Newbury, an iconic late-night host who’s on the verge of losing her show. In an attempt to overhaul the program, she hires Kaling’s Molly Patel — the only woman in a writer’s room stacked with men — to help make the show relevant and vital again.

“What, exactly, is wrong with my bits?” Thompson’s character asks Molly, who replies candidly, “You’re a little old, and a little white.”

Later, Molly hilariously describes herself as a “vibrant splash of color on the gray canvas of our writing staff.” If you haven’t guessed by now, Kaling wrote the screenplay for Late Night, and is also on board as a producer.

Elsewhere in the trailer, Kaling’s character (very awkwardly) makes herself at home in the writers’ room, and (correctly?) reads into Katherine’s declaration that she needs Molly’s pushiness and lack of boundaries to help the show succeed.

Molly’s clumsily self-aware confidence is reminiscent of Kaling’s titular Mindy Project character Mindy Lahiri, and even her Office character Kelly Kapoor, so it stands to reason that we’re already fully in love with this movie.