WTF Is a Taco Cleanse and Should You Do One? We Investigate 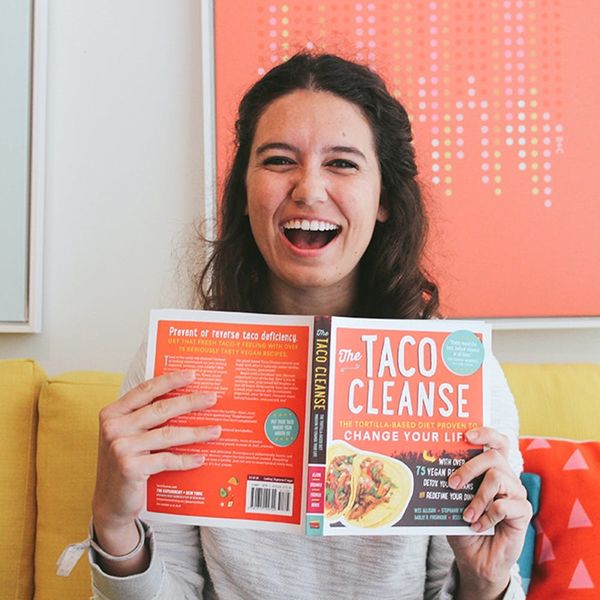 It’s January and time for us to repeat the same old adage: “New year, new you.” Let’s make and try to keep resolutions, be on good behavior for a week and… time’s up! After about a week of remorse, we forget about those “lofty goals” and move on. At least, that’s how the pattern typically goes for me year after year. But 2016 is the exception.

This is the year where I finally upgrade my diet from that of a 10-year-old child to that of an SF yuppie — organic, farm raised and green, green, green. Before, I mostly ate: cereal, quesadillas, chocolate, candy, hamburgers, Mexican food and chips. Okay, still eat. Where are the fruits and vegetables? Non-existent. But when a coworker told me about the Taco Cleanse, I knew this was my chance. Because I LOVE tacos. (Proof here and here). Little did I know, this would be the biggest dietary struggle of my life (except for the one day I attempted a juice cleanse and only made it to 10am).

So, the Taco Cleanse. It’s a real thing, y’all. There’s a book and everything! As a native Texas and connoisseur of Mexican food (and margaritas), it’s almost as if this cleanse was made for me. Still, as you undergo any major life change, you must complete a very crucial first step: Research.

I reached out to the authors of The Taco Cleanse, fellow Texans Wes Allison, Stephanie Bogdanich, Molly R. Frisinger and Jessica Morris, for advice on how to best prepare for this epic endeavor.

VH: What should I do to prepare for this diet?

The Taco Cleanse: Begin by taking the quiz in our book to see if the Taco Cleanse is right for you. (Of course it is! Duhhh!) The next step is to start a taco journal to keep a record of how you feel about the diet. Build a community of true believers to aid you on your journey by getting the book for your friends and family. When you first introduce tacos into your diet, you will notice immediate changes, including a higher state of mind. You may want to stay away from driving or operating heavy machinery, especially once you start taking your margarita supplements. (How many margarita supplements am I allowed… ?)

VH: What do you see as being the biggest obstacle when starting this taco cleanse?

TC: Your peers may question your choice to radically change your diet. They may not understand that you’ve found a new path in life. Talk it over with them and explain you’re doing what’s right for YOU. Additionally, if you are on the Familiar American Diet (aka FAD) you might not be used to having something spicy first thing in the morning. You might even wonder if tacos go well with coffee. As a Texan, I can assure you that once you start eating breakfast tacos in the morning, there really is no turning back.

VH: What did you personally miss most while on the taco cleanse? (I’m scared…)

TC: I did experience some detox symptoms, which I wasn’t prepared for considering my diet was already so taco-heavy. During the first week it was cold outside, and I was really craving some soup. I persevered, and within a week I was feeling better than I had in my whole life. After that, I learned that anything I missed could easily be turned into a taco, like the Pad Thai-co or the Pizza Taco (order pad thai or pizza and put it in a tortilla). (Pizza taco?! Bring. It. On.)

VH: Why a taco cleanse? What advantages do tacos have?

TC: We had long realized that eating tacos made us happier, better people, and to prove that to ourselves and the world, we decided to embark on the, then, experimental cleanse. Our research has repeatedly shown that tacos are the perfect food, and we had such amazing results, that we realized we had to share our research with the world. Well-balanced tacos are full of all the maco- and mezzo- and micronutrients you will ever need, and in our busy, go-go modern era, they are also simple to make and eat — something the people of Mexico have known for a long time and the rest of the world is just catching on to.

VH: As a native Texan, what can I look forward to with these recipes? A taste of home?

TC: Our tacos are what we call “Austin style” and are often inspired by our favorite restaurants. So you will find Mexican favorites like al pastor and guisada, Tex-Mex re-creations like migas and fajitas, Austin-inspired tacos like Smoked Brisket with Mac & Cheese and Frito Pie Tacos, and then our own creations, like the Tater Tot-cho Taco or the dessert-style Churro-Waffle Taco. Since we are all vegan, the recipes are free of any animal products, but I assure you, you won’t feel like you’re missing out!

Equipped with this advice and the book’s suggested meal plan, I started my epic taco cleanse. Check back next week on #TacoTuesday for all the spicy details about my week of tortilla-filled goodness and how I moved past these initial thoughts: tofu scramble (UH NO), tempeh (nooooo srsly?!), vegan chicharrones (this sounds very sad), soy curls (my stomach says NO). Until then, keep calm and taco on!

Want to join me on the 2016 Taco Cleanse? Pick up a copy of the book here and let us know your favorite recipe by tweeting @BritandCo!

Victoria Haas
Victoria Haas is a photographer, native Texan, and one half of the food blog, Being Fed. She enjoys telling stories, celebrating Shark Week, and searching for the the perfect breakfast tacos.
Books
Healthy Eating
Books Diet Healthy Living Healthy Recipes tacos
The Conversation
Reviews:
More From Healthy Eating