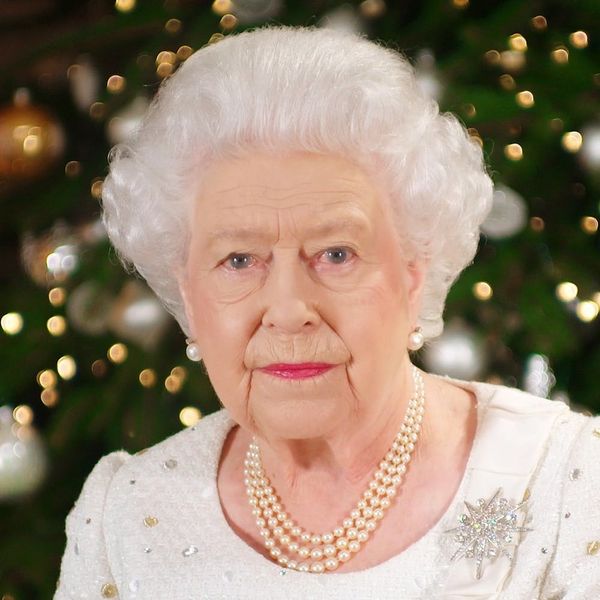 If anyone knows how to travel in style, it’s Queen Elizabeth II; the monarch attended 296 royal engagements in 2017 alone (phew!). With so many dates on her calendar, the world traveler needs good, reliable luggage, and that’s exactly what she’s got. In fact, the queen is so loyal to her suitcase that she’s been using the SAME STYLE since 1947 when she took it on her honeymoon with Prince Philip, at least according to the brand’s website. Prince William and Prince Harry’s grandmother relies on British brand Globe-Trotter’s Original Trolley Case ($1,370) to store her coordinated suits when she’s on the move, and we can’t say we blame her — the leather luggage features vulcanized corners and is handcrafted by artisans in England.

Read on for eight more celeb-approved suitcases that will have you booking your next flight STAT. (Photo via Max Mumby/Indigo/Getty)

1. Jessica Alba: While the Honest Company founder is also a fan of Away, having been spotted with a gray version of the brand’s suitcase as recently as September, she’s also been snapped rolling this gorgeous cream and black LOMS piece. While you can’t find the brand around these days, as it’s no longer in production, this CALPAK Ambeur 2-Piece Spinner Set ($285) isn’t too far off. (Photo via Bauer-Griffin/GC/Getty)

2. Kim Kardashian West: Considering that the mother of three has Louis Vuitton TRASH CANS, it’s no surprise that she sticks with the brand when traveling too. This Pégase Lègére 55 Business ($4,000) suitcase is definitely an investment, but it’s only the best for the reality queen! With a double-zip compartment for your laptop plus the brand’s signature logo print and padlocks, this suitcase is the cream of the crop. (Photo via Pixplus/Bauer-Griffin/GC/Getty)

3. Margot Robbie: Robbie is one of a growing list of starlets who entrust their possessions to cult brand Away (Mandy Moore and Karlie Kloss are also fans), which was created by former Warby Parker execs. Billed as “unbreakable” and featuring a USB port, the luggage acts as your own indestructible charging station. This The Carry On ($225) largely resembles the I, Tonya actress’ suitcase model. (Photo via starzfly/Bauer-Griffin/GC/Getty)

4. Emmy Rossum: The Shameless star was a breath of fresh air at LAX while pulling this bright and cheery geometric find from Jonathan Adler’s 2014 collaboration with Tumi. While the exact style, which features a hard shell, will cost you on eBay ($585, to be exact), you can snag a similar Jonathan Adler print in Marrakesh ($329) or Zipper ($199) while they last. (Photo via GVK/Bauer-Griffin/GC/Getty)

5. Hailey Baldwin: Leave it to the supermodel to select one of the trendiest brands around, Supreme, as her go-to travel carryall. The 21-year-old was captured by paps lugging what appears to be the Louis Vuitton Supreme Keepall Bandoulière 45 (roughly $3,680 in USD). With the brand’s online store closed until the Spring/Summer 2018 collection arrives, your best bet is to sign up for the company’s mailing list or try your luck on eBay, but beware, as the bidding is fierce: Listings START around $5,200 and quickly climb up well over $10K! (Photo via starzfly/Bauer-Griffin/GC/Getty)

6. Lucy Hale: The most budget-friendly option of the bunch comes from Hale, 28. The Life Sentence actress stayed right on trend with a millennial pink Herschel Supply Co. suitcase last January, the likes of which can be found at Urban Outfitters in the Trade Hard Shell Carry-On ($150). It has a polycarbonate shell so there’s no fear of it being banged around in bag check, plus, it’s got multi-directional wheels and a split design with mesh compartments to keep all your most important things safe. (Photo via Niceguy/Bauer-Griffin/GC/Getty)

7. Karolina Kurkova: Another celeb cult-favorite, Rimowa is beloved by everyone from Kristen Stewart and Solange Knowles to Victoria’s Secret stunner Kurkova, and it’s all in the details: This Ribbed 29” Suitcase ($1,245), has leather handles, TSA padlocks, and a four-wheel system for a smoother pull. Aah! (Photo via Marc Piasecki/GC/Getty)

8. Marion Cotillard: The French actress prefers luggage from her native land, rolling with (pun intended!) Parisian brand Goyer. This leather and brass medium vintage trunk ($5,500) is similar to the all-black Bourget Trolley Suitcase she was snapped with in LA. (Photo via GVK/Bauer-Griffin/GC Images)

Which piece of luggage is your fave? Sound off over @BritandCo.

Nicole Briese
Nicole is the weekend editor for Brit + Co who loves bringing you all the latest buzz. When she's not busy typing away into the wee hours, you can usually find her canoodling with her fur babies, rooting around in a bookstore, or rocking out at a concert of some sort (Guns N' Roses forever!). Check out all her latest musings and past work at nicolebjean.com.
Bags
Celeb Style
Bags Kardashians Online Shopping Royal Family Shopping Travel
More From Celeb Style