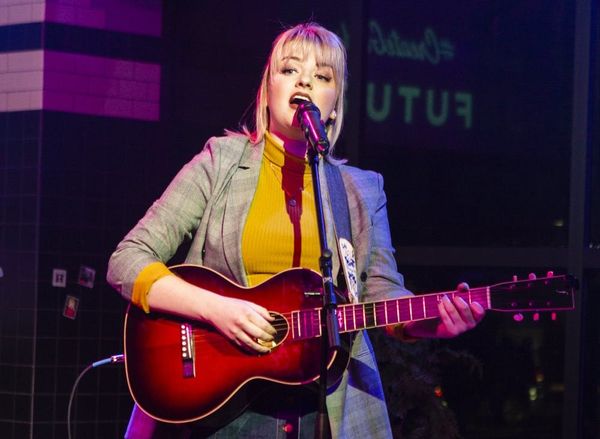 It’s been five months since Iowa native Maddie Poppe was crowned the winner of American Idol season 16, and her star is still on the rise. Hot on the heels of her appearance at #CreateGood 2018, Brit + Co is excited to exclusively premiere her music video for the irresistibly catchy “Keep On Movin’ On,” her first single since “Going Going Gone.”

“I’ve always had a love for theatrics, and we wanted to portray a story in the video,” Poppe, 20, tells Brit + Co. “When they pitched the idea for a single, continuous shot for the music video, it was both challenging and exciting. There was a lot of pressure but I knew it would be worth it to see the end result.”

The clip opens with a young couple going through a breakup, and proceeds to document the grieving, acceptance, and moving on that follows. It’s about the end of a relationship, sure — but also, the new beginnings that can bring. “My interpretation [of the song] is to keep moving on from the things that hold you back in life,” Poppe says. “Whether that be people or events or past lifestyles, I think it’s important for people to get back up and keep moving on when the going gets tough.”

Poppe appears throughout the video as a kind of musical narrator, providing the soundtrack for the story with her Americana-tinged tune. The multi-instrumental talent is practicing what she preaches — not being afraid to move forward in her own career, pushing her craft into new and diverse musical territories, and continuing to try new things.

Following her Idol win, Poppe went on a 47-city “American Idol Live!” tour throughout the summer. Now, she says, she’s looking forward to eventually following “Keep On Movin’ On” up with an album’s worth of material. “I have been writing and recording so much lately, it’s really exciting,” she says. “We’re still in the beginning stages of deciding which songs we want to record and put on the album, so there’s a lot of work to do yet, but we’ve got a good start!”

What do you think of Maddie’s new single and video? Let us know @BritandCo!