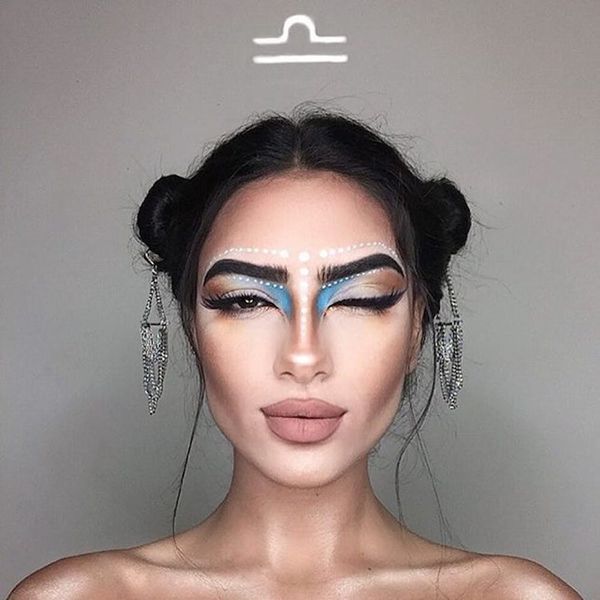 Need some inspiration? Look to the stars. Toronto-based makeup artist Setareh Hosseini recently honored each zodiac sign with a unique makeup look, and the results are pretty much unreal.

She is the tide, the gentle glow of the moon, the waves crashing on the shore. She feels everything deeply, even though she doesn't like to show it. Her shell may be hard and at times unbreakable but it is forever guarding her tender soul. Surely it is harder to break something soft rather than rigid. You touch her and she is far more real than anything you have ever felt before. Cosmic particles of moon dust line her veins. For she is like the moon, you'll see her with a new face everyday. ♋️ #CANCER

For Cancer, she used lots of reds for lips, accessories, and even on her cheeks. She finished her look with pearls and some crab claw earrings — fitting for the crab sign.

Recognized by her contradictory nature, her mind is always alternating between logic and absurdity. She's a combination of high intelligence, wit, and eloquence. Forever battling mystical forces of left and right; she'll mirror your best and worst parts and show you things you never knew you needed to see. ♊️ #GEMINI

For Gemini, Hosseini did two different looks on her face to represent the twins.

Uncompromisingly stubborn with a strong willed character, great perseverance and determination. She has a hot and fiery temper, and will unleash it when pushed to her limits. Even so, she loves anything that excites her senses. Controlled by inner serenity and a powerful sense of stability, she is & always will be a force to be reckoned with. ♉️ #TAURUS

Hossieni did dramatic eyes, dark lips, and added a septum ring to pay homage to the bull that represents Taurus.

Fiery and fiercely passionate, she wears a steel armor and her horns always aim ready for battle. Forever taking charge and continuously looking for dynamic and competition. Driven by avidity and born a fearless leader, she bares a pure and almost childlike soul; untainted & unafraid. ♈️ #ARIES

Ethereal, and deeply mysterious. Her mind swims at a depth most would drown in. She's always floating in opposite directions, this represents her soul's duality. She is the ultimate enchantress & her heart is an ocean of emotion; always dreaming of realms that only she may enter. ♓️ #PISCES

Hosseini didn’t shy from fish lips for her Pisces look. She also added some gorgeous “scales” on her forehead, highlighted her collarbones with a shimmery hue, and colored her brows a watery blue.

Her determination is admirable, her self-containment powerful. She's concrete, ambitious and in charge. Always leading loyally and achieving relentlessly. No mountain is high enough for her to climb, and her love is as stable as the earth. ♑️ #CAPRICORN

Capricorns got the earthy brown tone treatment that’s true to their sign. She added a dark, glittery lip, and a serious cat eye.

She's a restless wanderer; always hunting for new ideas and experiences. Her arrow symbolizes her desire for direction and a higher purpose. She's the maven of adventure, the learned healer whose higher intelligence forms a bridge between heaven and earth. ♐️ #SAGITTARIUS

Adventurous Sagittarius babes “whose higher intelligence forms a bridge between Heaven and Earth” were depicted as warriors with dramatic red lips, highlighted cheekbones, and upward-drawn brows.

It's all in her penetrating stare. Dark and calculating, her eyes are foreboding yet hypnotic. Powerful, passionate and intuitive. She wears strength and darkness equally well; half goddess, half hell. Nevertheless, she is divine, and in her eyes is where your soul is revealed. ♏️#SCORPIO

Scorpio darlings she painted with red accented collarbones, a dark ombre lip, and a dramatic double cat eye. She finished with a pointed bubble pony that looked like a scorpion’s tail. Don’t get stung!

Her charming personality is praiseworthy, her voice melodious, her heart just. To truly understand her, you must understand the riddle of the scales; forever balancing thoughts and emotions. She is a flower with hidden thorns & without her, life simply wouldn't be as fair. ♎️ #LIBRA

She personifies innocence, purity and justice. Her earthly nature makes her exceedingly clever and analytical. All that is beautiful to her erupts in subtle, though magnificent spectacle. She's a maiden & belongs to the pristine; always striving to bring order out of chaos. ♍️ #VIRGO #zodiac #makeup #mua

You can usually pick her out from a crowd – she’s the one with the loudest laugh, the brightest smile, and the most confident strut of them all. Her hair is a mane made of gold, and her skin glows like a sunset. She is an alpha, a lioness, a leader and a warrior. She may appear soft like a daydream, but she has a never ending inferno burning inside her. ♌️ #LEO

This lioness has spots! For Leo, Hosseini drew a bold cat eye, shaggy brows and faux freckles, added some lush furry lashes, and finished with a soft pink lip. But don’t be fooled. Hosseini shares, “She may appear soft like a daydream, but she has a never-ending inferno burning inside.”

She's a mad scientist in her lab, inventing and creating night and day. Her rapid influx of thoughts and subsequent surprising actions make her unpredictable and rebellious. Anarchy is her specialty. Forever fighting valiantly for the soul of the world, she pours forth her wisdom and equilibrates your mind. She is dazzling and terrifying; those words are not as removed from one another as you may think. Always seeing a thin line between genius and insanity. She lives in the future and who she is comes in waves. ♒️ #AQUARIUS

The water carrier Aquarius is both mystical and daring. She decked herself out with body glitter and drew a crescent moon on her forehead. She used hues of blues and orange on her Cupid’s bow, her lips, and the inner corners of her eyes.

Hosseini also partnered with YouCam Apps, so you can virtually try on each and every one of her zodiac looks. Cool stuff!

Are you going to try on Hosseini’s zodiac looks? Let us know @BritandCo!