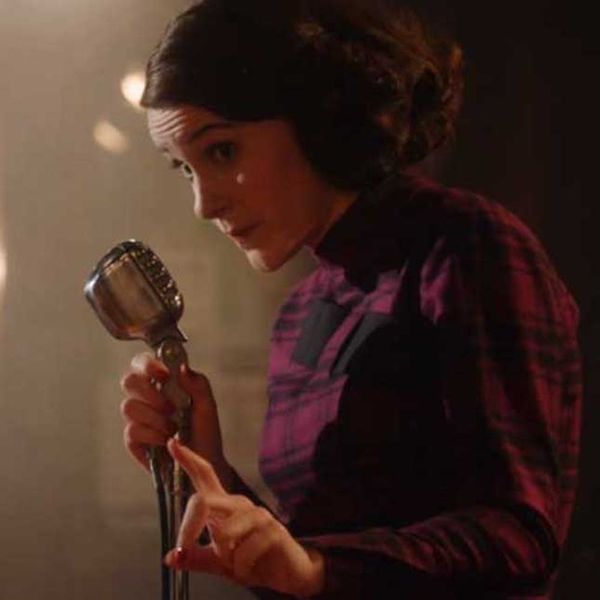 The Marvelous Mrs. Maisel just keeps getting better and better, so I am really excited to see what the season finale has in store. But let’s focus on episode seven, “Put That on Your Plate,” which features an excellent guest-starring turn from Jane Lynch and some commentary about women that may as well have been written about 2017 instead of 1958.

When the episode opens, we are treated to an incredible montage of Midge honing her act. She draws on her own experiences, plus things she overhears in her daily life, and works and reworks the jokes until they really sing. By the time the opening credits roll, she has a “tight 10,” as in a really solid 10 minutes of material (and actually, it’s 11 minutes).

So Susie tells her it’s time to stretch her wings by playing other clubs. She goes to agent Harry Drake to see if Midge can open for his client, the popular comedian Sophie Lennon. He has to see Midge first to see if she’s got the right stuff, but before he does, Midge and Susie go to one of Sophie’s shows. She is a brash, overweight, lower middle-class housewife from Queens, and the audience eats up her Larry the Cable Guy schtick.

I made that comparison because Dan Whitney, the man behind Larry the Cable Guy, is actually a smart, well-spoken family man, but I have encountered several people who don’t believe that. They think Larry is Larry, just like people think Sophie is Sophie.

When Midge gets invited to Sophie’s house, she discovers the comedian lives in an incredibly lavish Manhattan apartment complete with butlers and maids and is actually a tall, thin, beautiful, articulate society woman. It really throws Midge, though not nearly as much as Sophie’s advice throws her. Sophie tells Midge she can’t be herself on stage. She has to have a gimmick, a persona, or men won’t find her funny.

Midge takes great umbrage at this advice and her criticism of it comes out in both the most amazing and the most horrible way possible — she reveals Sophie’s real identity during a set at the Gaslight, where Harry is in the audience to see her perform before he’ll give her the opening-act gig.

It’s a great set, as Midge blasts the idea that a woman can’t be attractive and funny at the same time, but it also completely torpedoes Susie and Midge to Harry — and deservedly so. While Midge is right about how she shouldn’t have to be anything other than herself on stage, it’s not cool to sell out Sophie like that. And obviously, since Sophie is an established comedian with a high-powered agent, things are about to get very tough for our dynamic duo.

Meanwhile, Joel is living at his parents’ house and has taken a job at a plastics company. He makes a good suggestion at work, which is probably going to lead to a sizable raise, a promotion, and eventually a move to California. He steps up to be the person it sounds like he never was when he tells Abe that he’ll have Midge and the kids completely taken care of when he gets this raise. It’s really sad to hear him say that moving to California is no big deal because the kids don’t need him, and it gives Abe pause. I do wonder what Abe will do with all of this information. I don’t want Midge and Joel to get back together at all, but the kids should have their father in their lives and Abe knows it.

Speaking of Abe, I’m very surprised that the two bombshells that dropped in episode six didn’t come to fruition here. There was no fallout from him finding out about his daughter’s arrests, except maybe that it’s what spurred him to find her a divorce lawyer? But I thought there would be more to it than that. And nothing happened with the recording of Midge’s first set, which you know would cause ripples in certain circles because it would be so obvious who it is and who she’s talking about. Hmm. Maybe in the season finale, one or both of those things will be addressed.

Finally, Rose finds out from Abe that Joel tried to come back to Midge and she turned him away — and she is fit to be tied. But she’s more upset about the fact that her husband and daughter kept this from her than the fact that Midge didn’t take Joel back. It culminates in a pretty great moment where Rose vents her frustration at Midge, by railing on her about her mysterious new fur coat in the middle of temple.

Poor Rose. She can’t trust her family and her psychic is gone. That’s rough.

I’m very sad that this is the end of Drina the psychic. She and Rose were delightful.

Susie and Midge are just so great together. I can’t say enough about their friendship. I actually teared up a little when Susie teared up over how good Midge’s act is getting.

Midge: “Those are tears.”

Susie: “She got a lot of us through the Depression.”

Abe: “Miriam doesn’t have a type. My God, before Joel, you were with that ultra-white Palmer Witherspoon. He was like a pole vaulter from Triumph of the Will!” This was an incredibly good joke on Abe’s part, so for those of you who didn’t Google it and are wondering, Triumph of the Will is a rather infamous Nazi propaganda film.

Susie: “Jackie, how disgusting is the women’s room that the men’s room is less disgusting?”