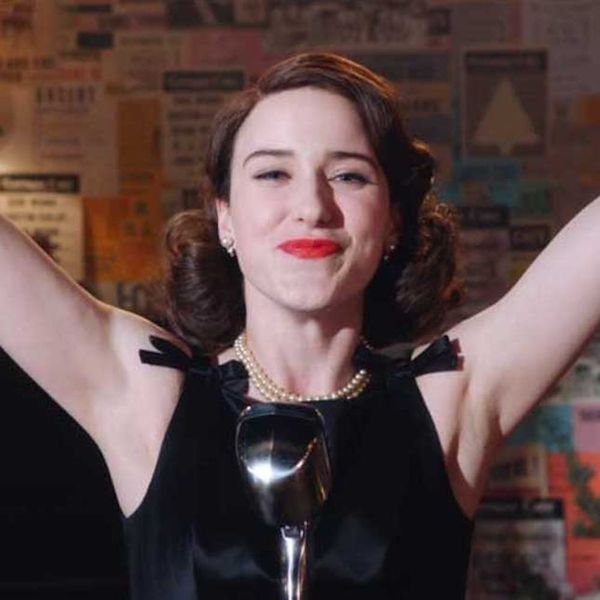 Amy Sherman-Palladino sure knows how to write a season finale. The Marvelous Mrs. Maisel went out on such a high (but sad) note with “Thank You and Good Night.” The next season of this show cannot come fast enough.

For the final episode, Midge and Susie have to try to put the pieces back together after Midge’s “suicide set” at the Gaslight, where she set fire to Sophie Lennon. Midge is so persona non grata that she can’t even work a gig at a strip club.

So Susie pulls out her last, desperate trick — she goes to Lenny Bruce and asks him to do a set at the Gaslight and let Midge open for him. He’s so impressed by Midge’s takedown of Sophie that he agrees to do it, and Midge kills it. She also finally uses her real name — don’t think that symbolism went unnoticed.

Unfortunately, Joel is there to catch the show. But let’s back up a bit in regards to Joel.

After Ethan’s birthday party, Joel and Midge spend the night together. That’s not a huge surprise. It’s easy to have a nice day with an ex and fall back into old habits, especially for Midge, who has been pretty lonely — something she finally admits to her father later when she tells Abe that she and Joel might reconcile.

But during their tryst, Joel finds Midge’s Redd Foxx comedy album and then decides to pay a visit to the hole-in-the-wall record store where Midge got it. There he overhears some customers and the owner listening to Midge’s recording and he freaks out. It’s an understandable reaction. Even with how terribly Joel has behaved, finding out your life has been put on blast in front of a comedy club audience is pretty shocking, especially finding out in that way.

He isn’t sure what to do with this information, so he quits his job and gets drunk (as one does) and then wanders into the Gaslight that night. As Midge (who doesn’t know he’s there) regales the audience with the story of how Penny Pan (Holly Curran) came to B. Altman’s and yelled at her, he gets angrier and angrier, until he confronts Susie about how she ruined his life by making Midge do comedy.

Susie rightly tells him he ruined his own life, which he knows is true, and he’s about to drunkenly stumble outside when he hears some jerks heckle Midge. They tell her she’s not funny, call her a b*tch, and walk out, which Midge takes in stride. She lobs a few insults their way, the crowd eats it up, and everything’s fine… inside the club.

Outside the club, Joel works out his aggression on the nameless heckler, punching him over and over again until some guys have to pull him off. Hearing Joel yell at the man that Midge is “f*cking good” at comedy, then repeat it softly to himself and stagger drunkenly down the street, is incredibly sad. Joel has no one to blame but himself — and even he points out earlier how incredible Midge is — but it’s still just a little bit heartbreaking.

So, Midge is going to be a big hit and Joel has nothing. And that’s where we leave things. It’s a triumph for Midge, career-wise, but there is going to be some fallout, because she too was excited to put her family back together. She knows Joel may not like the person she’s become, but her dad says that marriage is about change, and if he truly loves her, he’ll love the new her. We’ll see.

Things are a bit up in the air for Abe and Rose too. Rose is still incredibly hurt that she wasn’t kept in the loop about Midge and Joel, so she hilariously moves Abe out of his study and puts the dining set in there. While that’s a great running joke in the episode, the hurt is palpable when Rose catches Midge getting dressed for her big night and Midge won’t tell her where she’s going. The Weissmans obviously have some work to do as well.

Speaking of Rose, her navy velvet robe is amazing. I may covet that more than any other piece of clothing in the entire show.

Joel: “You meet a girl, maybe she’s pretty, maybe she’s smart, maybe she’s funny, maybe your parents like her, maybe you get really lucky and she’s one or two of those things. I got ’em all. That’s a lot.”

Abe: “You have laid waste to everyone and everything around you. It’s been like a typhoon. The Red Cross should start handing out blankets. You have ruined everybody’s life and now that there’s no more havoc to wreak, you wanna get back together and be happy? Noooo. You don’t get to be happy until I can get to my piano!”

Abe: “If he loves you and you can forgive… oh, who the hell knows? Just please don’t tell your mother unless you are very, very sure. Because if I come home and she’s moved me into the kids’ room, I’ll have to kill you. I’ll feel bad about it, but it will happen.”

Just as an aside, those dancers Midge hired for her wedding reception were incredible. Wow.