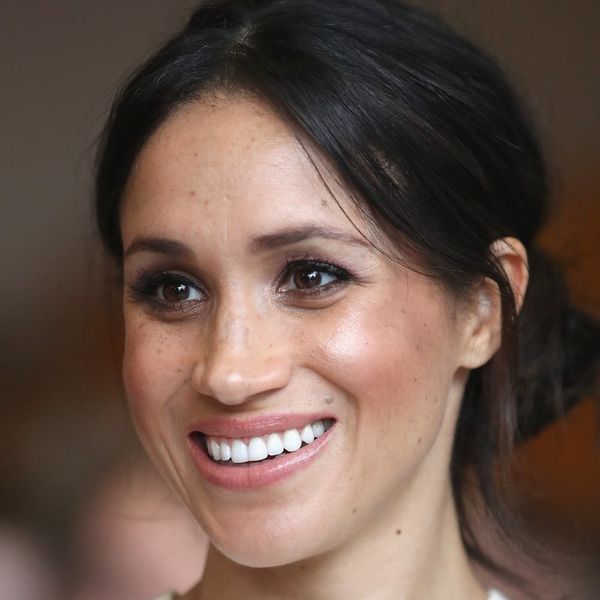 We already knew that Meghan Markle had a penchant for minimalist jewelry (see: her delicate Zofia Day bar ring or the dainty mismatched earrings she wore back in January for proof), but we had no idea her understated look was so dang affordable! Despite reports that the bride-to-be has been shelling out a pretty penny for couture looks, girl CLEARLY still knows a deal when she sees one. Case in point? The simple gold bands she donned for her first official joint appearance with Prince Harry in Edinburgh, Scotland cost less than $50!

When the royal-to-be stepped out to greet the country last February, the focus was largely on her Burberry tartan-print outerwear and Strathberry purse. As it turns out, however, there was actually another element of her ensemble that’s still up for grabs, and it’s one that the rest of us can *actually* afford.

The Suits star paired her jaw-dropping engagement ring with several super dainty thin gold bands on her opposite thumb and index finger.

Brooklyn-based jeweler Catbird has confirmed to Us Weekly that the bands in question are the brand’s Threadbare Ring ($44), a “whisper-thin” style hammered from a.55mm wide piece of solid 14K gold.

As Markle, 36, demonstrated, each ring can be worn solo or on separate fingers, but they can also be stacked for a whole new look.

Snatch one up before they sell out at Catbird.

What do you think of Meghan’s affordable style? Tell us over @BritandCo.

Nicole Briese
Nicole is the weekend editor for Brit + Co who loves bringing you all the latest buzz. When she's not busy typing away into the wee hours, you can usually find her canoodling with her fur babies, rooting around in a bookstore, or rocking out at a concert of some sort (Guns N' Roses forever!). Check out all her latest musings and past work at nicolebjean.com.
Celebrities
Celeb Style
Celebrities Celebrity Style Jewelry Rings Royal Family
More From Celeb Style