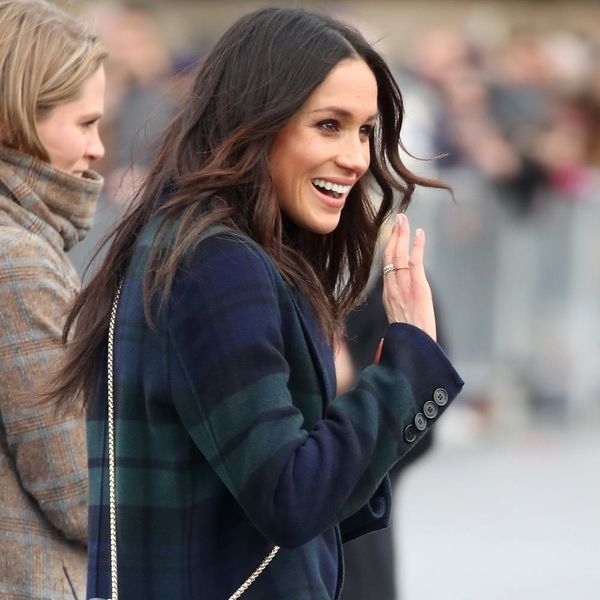 Another day, another stunning style moment courtesy of Meghan Markle! The 36-year-old just stepped out again in a royally-chic look that will make anyone who’s skeptical of wearing plaid rethink the print.

The bride-to-be arrived with her soon-to-be-hubby in Edinburgh for their first official joint visit to Scotland, where she gave a big nod to the host country in a tartan-print coat.

Clearly, she was 100 percent spot-on with the country’s official print! (We mean, how cute is it that she’s twinning with this Scottish horse?)

The Double-Breasted Tartan Wool and Cashmere-Blend Coat ($2,895) from the quintessentially-British brand, Burberry, features structured shoulders, six black buttons, and a midi-length cut. The brunette beauty paired the outwear with a pair of simple black flared trousers.

The fashionista’s statement coat wasn’t the only sartorial nod to Scotland, though; she also carried a Scottish-made crossbody purse from the Edinburgh-based company, Strathberry. Apparently the Suits actress is fond of the handbag label because, according to reports from People, she also carried a Strathberry bag at her very first official royal outing in Nottingham.

We can’t wait to see what other looks this beauty dishes up over the course of her royal duties!

What do you think of Meghan Markle’s plaid look? Let us know @BritandCo!