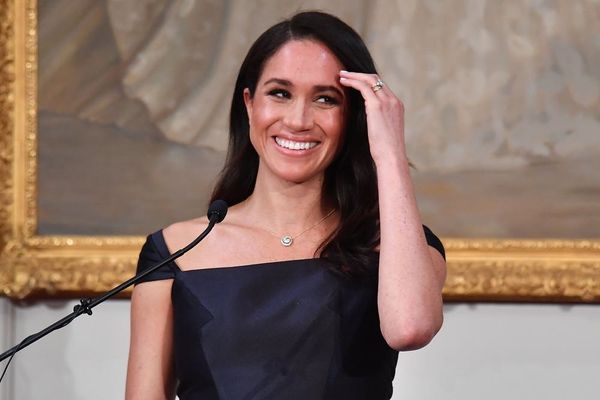 Meghan Markle and Prince Harry are on the final leg of their fall 2018 royal tour, and as the couple appeared in New Zealand on Sunday, October 28, the Duchess of Sussex delivered a powerful speech on the importance of feminism and equality.

“We are proud to be able to join you tonight in celebrating the 125th anniversary of women’s suffrage in your country,” Markle began her speech at Government House in Wellington, where she and Prince Harry were joined by Prime Minister Jacinda Ardern and Governor Dame Patsy Reddy.

“Suffrage is not simply about the right to vote but also about what that represents: the basic and fundamental human right of being able to participate in the choices for your future and that of your community,” she continued. “The involvement and voice that allows you to be a part of the very world that you are a part of.”

"Bravo New Zealand for championing the right of women to vote 125 years ago." — The Duchess of Sussex, as she and The Duke joined PM @JacindaArdern and @GovGeneralNZ Dame Patsy Reddy to celebrate the 125th anniversary of women's suffrage in New Zealand. #RoyalVisitNZ pic.twitter.com/zpFhyPiE8r

Markle has never shied away from her dedication to women’s rights, and even purposefully pointed it out in her official royal family biography following her May 2018 marriage to Prince Harry. “I am proud to be a woman and a feminist,” her quote read.

And she doesn’t just give speeches: Before her transition to royal life, Markle worked with the UN as a women’s rights advocate, and together with Harry — whom Markle has called a feminist too — she supports the Myna Mahila Foundation, which works to empower women in India about menstrual hygiene.

“So bravo, New Zealand, for championing this right 125 years ago — for the women who well deserve to have an active voice and acknowledged vote, and for all of the people that this effort has paved the way for globally,” she concluded her speech in New Zealand. “We all deeply thank you.”

Are you glad that Meghan Markle is so vocal about feminist issues? Let us know @BritandCo.