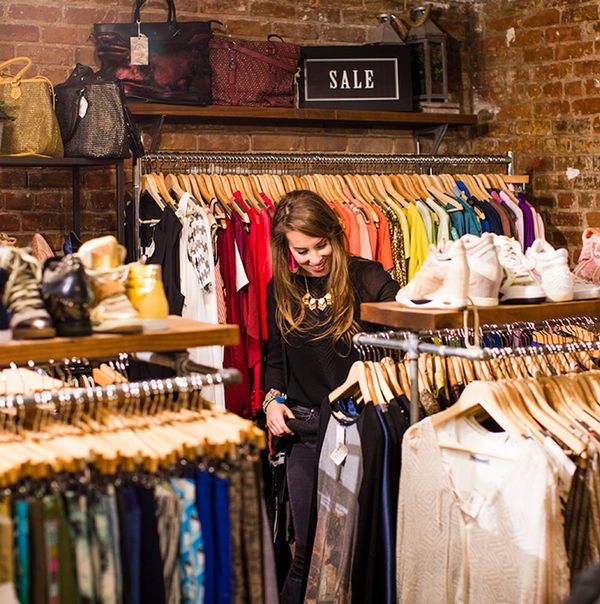 It seems that barely a week goes by that there isn’t a new report detailing an industry that’s getting “killed” by millennials. Over the last few years, it’s become evident that millennial people just don’t buy the same things that our parents’ generation did. A lot of this has to do with finances: Many millennials have a lot of student loan debt, and many also entered the workforce during the recession. All of this adds up to a general desire to buy conscientiously and to save money.

But millennials do have a lot of spending power, which makes them a truly desirable segment of the market, according to Vice President of Marketing for Label Insight, Kira Karapetian. Karapetian tells Brit + Co that millennials spend an estimated $600 billion (!) each year.

Though there are plenty of products that are in decline in large part because millennials don’t like them, the generation has been unfairly scapegoated in the press a few notable times. Last year, Business Insider ran a headline claiming “Millennials aren’t eating cereal because it’s too much work,” and suggested that young shoppers were to blame for a dip in cereal sales. This turned out not to be totally accurate, but we’ll get to that later! The point is: It’s fair to be a little wary of headlines that claim millennials are “killing” a product or an industry. Sometimes, the truth is a bit more complicated.

But, indeed, there are a number of things that older generations enjoyed that millennials either aren’t interested in or just don’t feel they have the money to afford. Here’s a look at 18 things millennials aren’t buying very much of these days.

According to a 2016 study from The NPD Group, a market research company, and Stylitics, a fashion and tech consumer insights company, while overall handbag sales went up between 2014 and 2016, growth lagged among one very important shopping contingent: millennials. The NPD Group and Stylitics report said that handbag sales were up five percent among baby boomers between 2014 and 2016, but only two percent among millennials in the same time period. Millennial handbag-buyers, it turns out, consider the purchase for a few months before actually buying and aren’t tied to brand loyalty.

The millennial handbag customer “starts with specific product attributes, not a brand, when looking for her next handbag, and invests more time and research in her purchase than brands and retailers realize,” Stylitics CEO and co-founder Rohan Deuskar stated in the 2016 report.

CNBC reports that while millennials have not stopped buying diamonds altogether (in fact, millennials bought $26 billion worth of diamonds in 2015), they’re definitely not buying as many diamonds as the previous generation. The diamond industry largely relies on engagement rings for sales, and millennials aren’t getting married as soon or as frequently as baby boomers did. The Financial Times reports that marriage rates in the US are the lowest they’ve been in 100 years, and in general, millennials are waiting longer to get married.

Not only are fewer millennials getting married than baby boomers when they were in the same age range, but millennials who do get engaged often prefer to buy rings that don’t have diamonds, and would rather spend big chunks of money on experiences rather than things, according to CNBC.

According to USA Today, millennials only like to go shopping in brick and mortar stores if they’re offered an experience that can’t be found online. Department stores like Macy’s and Sears haven’t been making the cut, and, as a result, have been closing in huge numbers. Meanwhile, discount stores like TJMaxx have actually been opening in more locations. NBC reports that discount stores are appealing to millennials who enjoy hunting for a good deal, and, of course, the lower prices are appealing among this group that doesn’t like to waste money. (Photo via Drew Angerer/Getty)

Homeownership isn’t affordable for many millennials. According to a recent report from Bank of America Corp., cited by Investopedia, “The gap in affordability between the overall population and young adults has widened over the years.” As a result, only 38 percent of US millennials are homeowners, and the overall homeownership rate has dropped to below 65 percent — the lowest it’s been in over 50 years.

Overall, millennials are waiting longer to buy homes compared to older generations. Michelle Meyer, an economist at Bank of America Merrill Lynch, told Business Insider in June that, “The delay in homeownership is due to tighter credit standard and lifestyle changes, including delayed marriage and children.”

Casual dining chain restaurants like Applebee’s and Buffalo Wild Wings are not exactly popular among young adults. In fact, millennials have been accused by Business Insider of “killing” this type of restaurant. This year, Applebee’s made a concerted effort to attract millennials, but it just didn’t pan out, and the company was forced to abandon appealing to this age group altogether, NPR reported in August.

But a lack of interest from millennials has been an issue for casual dining chains for years. In 2014, Red Lobster chains weren’t doing well in sales, forcing the company to sell. In a report about Red Lobster’s decline, USA Today noted that these chain restaurants just aren’t cool enough for millennials. And have we mentioned the prices? Despite being nothing fancy, casual dining restaurants aren’t cheap, and as we now know well: Millennials like to save money.

When it comes to cracking open a cold one, millennials aren’t interested in mass-market American brands. According to a CNBC report, unlike the baby boomer generation, millennials prefer craft beers to big-name brands like Budweiser and Miller-Coors. Not only are millennials more inclined to reach for unique craft beers, but they’re not drinking as much beer as older generations in general. The Denver Post reported in July that, overall, when millennials are looking to get boozy, they’re turning to hard liquor and wine. Oh, and also, weed: Millennials are smoking quite a bit of weed, as it turns out, which may also be cutting into beer sales.

GQ looked into these claims, and found that many of the millennial-bashing cereal headlines were (you guessed it!) not entirely accurate. Speaking with the company behind the study, Mintel, a market intelligence agency, GQ learned that millennials are still, in fact, buying cereal, just not for breakfast.

Yogurt sales, especially light yogurt, are in decline. Business Insider reported in 2016 that light yogurt sales dropped eight-and-a-half percent in the year leading up to the report, and millennials were apparently to blame. The reasoning here is that millennials are taking a different approach to “healthy eating” than older generations, opting for organic and high-protein foods, instead of just foods low in calories and fat, according to Business Insider.

Millennials aren’t buying homes at very high rates, which means they have little need for home improvement supplies. As renters, millennials aren’t in the market for new toilets, sod, and kitchen backsplash tiles, giving them no real reason to spend money at stores like Home Depot and Lowe’s. (Photo via Scott Olsen/Getty)

Fabric softener sales are way down these days (26 percent between 2007 and 2015, according to Fox Business), and supposedly millennials are to blame. According to a statement made by Proctor & Gamble’s President of Global Fabric Care Shailesh Jejurikar in a 2016 investor meeting, millennials “don’t know what the product is for or think it is for a specific load,” Fox Business reported.

But Proctor & Gamble’s communication director, Damon Jones, made a broader statement: “While most households do laundry and use detergent for cleaning, only two-thirds use a fabric conditioner.” Sounds like a lot of people aren’t using fabric softener, not just millennials.

Consumerist further noted that some types of athletic clothing, which is a really popular clothing type right now, shouldn’t be washed with fabric softener, a factor which may contribute to its fall from use.

According to National Golf Association figures cited in the NY Post, there were 24.1 million golfers in the United States last year, a slight drop from 24.7 million golfers the previous two years. Gavin Newsham, an editor for Golf Punk magazine, opined in the Post that “it’s the millennials’ fault” that golf is in decline. Golf is an expensive sport mostly enjoyed by an older set of people, and money-conscious millennials just aren’t interested in picking it up.

It turns out that millennials aren’t as big of fans of motorcycles as their parents’ generation. When Harley Davidson was downgraded from “outperform” to “market performance” for sales expectations this year, millennials were listed as a big reason why. David Beckel, an analyst for AllianceBernstein, the investment company that downgraded Harley Davidson, stated that their data “suggests the younger Gen Y population is adopting motorcycling at a far lower rate than prior generations,” according to CNBC.