Miss Texas Handled a Question About Racism More Eloquently Than Most 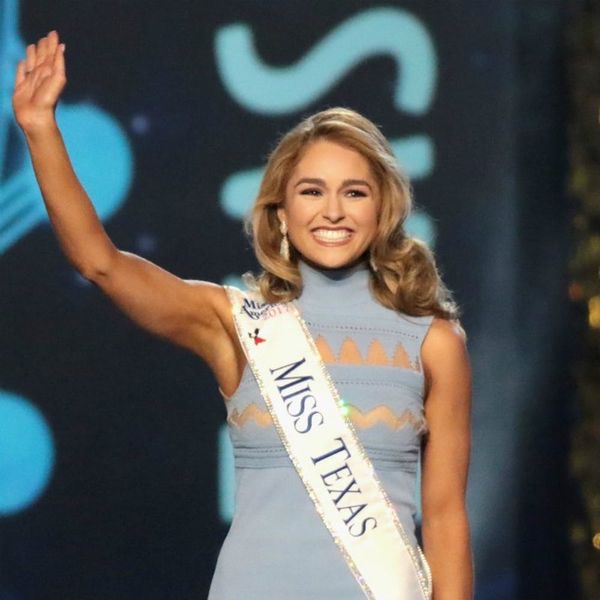 During last night’s Miss America pageant, Miss Texas Margana Wood clapped back at President Trump’s remarks in the aftermath of last month’s white supremacist violence in Charlottesville, Virginia, which the president described as coming from “many sides.”

During the interview portion of the show, Wood selected a question from judge and fellow Texan Jess Cagle (editorial director of People and Entertainment Weekly), and when he brought up the President’s comments on Charlottesville and white supremacists in the country, Wood shut them down in a flawless response that has even social activists applauding her.

After selecting Cagle, the judge asked his pointed question: “Last month, a demonstration of neo-Nazis, white supremacists, and the KKK in Charlottesville, Virginia, turned violent and a counter-protester was killed. The president said there was shared blame with ‘very fine people’ on both sides. Was there? Tell me yes or no and explain.”

She had 20 seconds to nail her answer on Trump's failure to call out white supremacy in Charlottesville.

In less than 20 seconds, Wood managed to call out white supremacists, the president’s lackluster response, and solidify what she thinks the number one priority should be during these trying times: making people feel safe.

“I think that the white supremacist issue, it was very obvious that it was a terrorist attack,” said Wood. “And I think that President Donald Trump should’ve made a statement earlier addressing the fact and in making sure all Americans feel safe in this country. That is the number one issue right now.”

Many applauded Wood’s response, including social activist Shaun King who tweeted: “She had 20 seconds to nail her answer on Trump’s failure to call out white supremacy in Charlottesville. She used every single second well.” King is a prominent Black activist who has used his vast platform on social media (he has over 750,000 followers on Twitter alone!) to share information about religious, charitable, and social causes, including the Black Lives Matter movement.

Many others took time to congratulate Wood on her flawless answer, while simultaneously expressing disappointment in the president for his remarks in August.

Miss Texas–a white woman–showed more integrity in 20 seconds than Trump has known all his life.#MissAmerica

In all seriousness,I feel strangely encouraged that Trump is now so deeply unpopular that even Miss TEXAS feels comfortable ragging on him.

Although there were a few detractors to call Wood out, the pageant contestant became the unofficial winner of the night even after the crown went to Miss North Dakota, Cara Mund. Even Cagle said she had the “answer of the night” on his Instagram account.

Besides being woke about racial issues, Wood’s official pageant platform of “You Belong” has gotten attention from the LGBTQ+ community for its inclusive, pro-equality message. Houston LGBTQ+ magazine Outsmart quoted Wood as saying, “It’s important for everyone to hear the phrase [You Belong], because they do — everybody belongs.” Her reason for inclusivity? It’s all about preventing bullying, the Houston native says.

Hoping to empower people from every walk of life, the Texas University graduate sees the power in fostering judgment-free attitudes while helping to support folks who may otherwise be left behind due to racial, sexual, or gender disparity, calling 2017 “the age of bullying.” Now THAT is setting an example.

How do you feel about Miss Texas’ response during the Miss America pageant? Tell us @BritandCo!

Update: An earlier version of this mistakenly described Charlottesville as being in North Carolina. We regret the error.

Kat Armstrong
Kat has been a writer, social media maven and mom for longer than she's willing to admit. She's also spent time in front of and behind the camera, interviewing celebs, politicians and acting as a producer for fashion and artistic photography shoots. When she isn't writing for various orgs and publications, she's hanging with her kids, husband and French Bulldog, Peter, in Toronto, Canada.
inclusivity
Current Events
inclusivity
More From Current Events