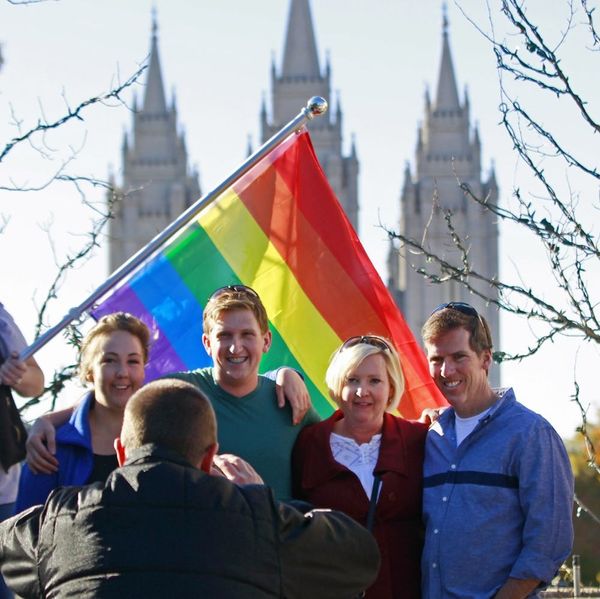 The Mormon church (officially called the Church of Jesus Christ of Latter-day Saints, or LDS) announced Thursday, April 4, that it will no longer regard same-sex couples as “apostates.” The church will now allow the children of same-sex parents to baptize their kids into the faith, without special church permission.

The decision is a reversal of a 2015 church policy which prohibited the children of same-sex couples from being baptized into the faith until they turned 18, and then, only if they stopped living with their LGBTQ+ parents and disavowed same-sex marriage. In a statement regarding the rule change, the church clarified that while it will no longer mandate the rejection of gay couples and their children from membership in the faith, it still considers same-sex marriage to be “a serious transgression.”

“The immoral conduct in heterosexual or homosexual relationships will be treated in the same way,” the statement reads, per CNN.

The official LDS stance on LGBTQ+ identities and relationships has long been subject to blowback from a small but vocal contingent of the church’s membership. But as millennial and Gen Z Mormons have come of age, the call for LGBTQ+ acceptance has become a more mainstream LDS concern.

Last year, Imagine Dragons frontman Dan Reynolds was the subject of an HBO documentary, Believer, about the experiences of LGBTQ+ youth in the Mormon community. Although the now-31-year-old Mormon rock star does not identify as LGBTQ+ himself, he’s been a vocal champion of LGBTQ+ acceptance in the faith. “Within homes of faith, you have to choose between what you believe and who you love,” he said. “No one should be forced to choose that.”

Tensions between the church establishment’s social conservativism and the more liberal, worldly views espoused by younger members have sparked a movement dubbed “Middle Way Mormonism.” Middle Way Mormons are inclined to be open to things like the consumption of alcohol and caffeine, using swear words, and sex before marriage — all of which are forbidden by the church. They’re also likelier than their more orthodox church counterparts to express progressive attitudes about sexual orientation and gender.

As one millennial Mormon put it in a 2018 interview with The Salt Lake Tribune, “I want people to feel welcomed, loved and accepted as they are, and it’s not my job to judge their temple worthiness.”

RELATED: 8 Moms Tell Us Why They’re Celebrating Pride With Their Kids