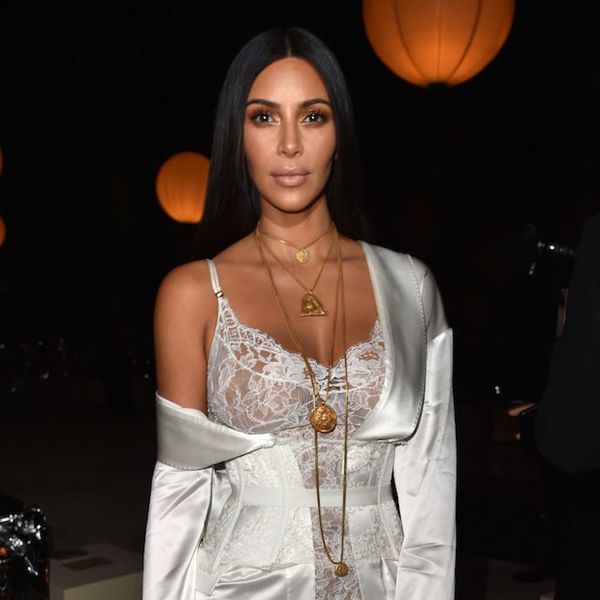 1. While most of her family has returned more or less to their regular social media schedules, Kim has remained totally silent since she was robbed at gunpoint in Paris almost one month ago. But the social media queen showed the first signs of a reappearance, posting three Facebook updates on Monday night. One was an ad for LuMee, the second was a link to a blog post by her assistant about last-minute Halloween costumes, and the third was a link to a video Kourtney made of old Halloween home movies. Aw! Of course, these promotional posts are potentially not posted by Kim herself, but we can dream, right? We miss you, Kim. (Photo via Pascal Le Segretain/Getty)

2. Another woman has come forward to accuse Donald Trump of sexual assault. That brings the total to 12, in case you lost count. Former Miss Finland Ninni Laaksonen told Finnish newspaper Ilta-Sanomat that Trump groped her before a Letterman appearance in 2006. “Trump stood right next to me and suddenly he squeezed my butt,” Laaksonen said, according to a translation in The Telegraph. “He really grabbed my butt. I don’t think anybody saw it but I flinched and thought, ‘What is happening?’” It’s all sounding sickeningly familiar. (Photo via Alex Wong/Getty)

3. Taylor Swift used her Hollywood connections to get a pretty sweet Halloween costume. That’s right — she borrowed her good friend Ryan Reynolds’ Deadpool costume. Thanking him in one of the pics of her squad’s Halloween party, she wrote, “you’re the BEST Deadpool inside contact ever.” No kidding!

Spending my days learning how to keep up with this little pumpkin. Happy Halloween Everybody!!! @lillebaby My latest @PEOPLEbabies blogpost is up! #😍

4. Tatyana Ali shared the first pic of her new baby and it is beyond adorable. Tatyana and her husband Vaughn Raspberry welcomed their first child back in September, and she’s shared the first pic of the little pumpkin, an adorable (and seasonal!) snap of him bundled up in a carrier with the caption, “Spending my days learning how to keep up with this little pumpkin.” His little fist poking out high in the air is just perfect. Adorbs!

This year's #RockCenterXMAS Tree comes from Oneonta, NY—& what a view from the top! pic.twitter.com/g0qHbkrHz5

5. The Rockefeller Christmas tree is coming! Rockefeller Center announced that they’ve found their tree for the year, a giiiiiiant backyard Norway spruce from just outside of Albany. The above pic shows the view from the top of the tree, which will arrive in midtown Manhattan on November 12. The tree lighting ceremony will take place on November 30. We can talk about all of this now that Halloween’s over, right? Thought so.

6. Quote of the day: “Anxiety is nothing to be ashamed of; it affects millions of people every day. I know I have fans out there who have been through this kind of thing, too, and I wanted to be honest for their sake, if nothing else.” Zayn Malik pens a very personal piece about his struggles with anxiety over at Time.

Do you think celebrities should be more open about their mental health struggles? Let us know over @BritandCo.