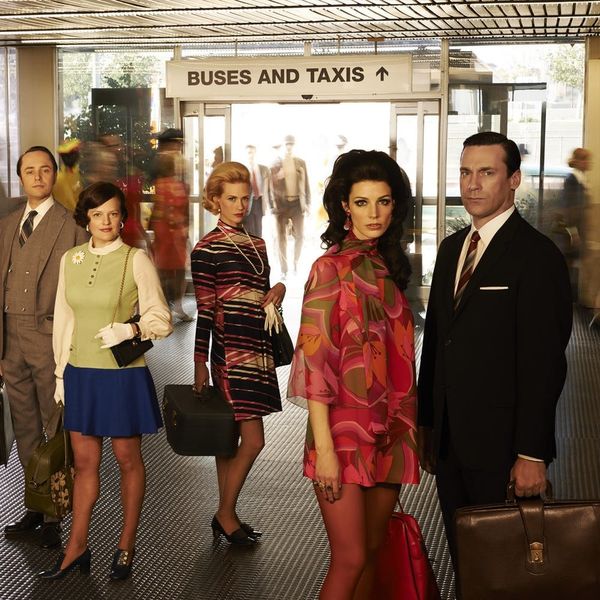 As far as we’re concerned, there aren’t a lot of problems in the world that a TV show marathon can’t fix. Need to chill after a long week? Netflix marathon. Having an “off day?” A couple episodes of Friends should do the trick. Bonus points, however, will be awarded to any show that has serious style. We’re talking do-a-double-take-on-your-screen style. Whether it’s a moody period piece or a modern-day buddy sitcom, the wardrobe on set can make all the difference. And yes, in case you’re wondering, Gossip Girl did make the cut — but don’t worry, we’ve also tucked a few wild cards into the list. Scroll on to find out which shows’ outfits always stole the scene.

1. Mad Men: The show that inspired thousands of Halloween costumes, Mad Men gave us serious throwback style, from perfectly coiffed hair to fit-and-flare dresses. This 1960s drama had us wondering if we were born in the wrong era. If this show taught us one thing, it’s that the updo is totally underrated. (Photo via AMC)

2. The O.C.: Okay so, maybe you’re rewatching the episodes on Hulu and cringe at the cropped boleros and ultra-low-rise ruffle mini skirts. But, we’d be lying if we said the show’s looks weren’t what our high school closet dreams were made of. In fact, we’re still on the hunt for Summer and Marissa’s prom dresses. (Photo via Fox)

3. Clarissa Explains It All: Clarissa Darling is a girl after our own heart. She knew the importance of an embellished denim jacket with a side of sarcasm to boot. She tackled major issues like boys, pimples and an annoying little brother, all while rockin’ bold prints and scrunchies for days. (Photo via Nickelodeon)

4. The Fresh Prince of Bel Air: Sorry to Lena Dunham and the cast of GIRLS, but this show invented “power clashing.” Yes to candy-colored stripes. Yes to bright prints. Yes to shoulder-pad blazers. Why not wear it all at once? This ’90s sitcom really had it goin’ on. (Photo via NBC Universal)

5. Empire: Can we get a “Yas Kween!” for our girl Cookie? Major props to any woman who can pull off a head-to-toe leopard look, fedora and all. A furry fuchsia stole, a gold snakeskin blazer, a studded red leather ensemble — honey, these are just the BASICS! Is there anything this woman can’t wear? (Photo via Fox)

6. Daria: This iconic cartoon has us craving a serious combat boot comeback. Even though Daria Morgendorffer would probably never approve of being on a list like this, we couldn’t help but add her anyway. Her signature outfit is equal parts edgy and effortless. Also, shout out to Jane Lane’s amazing blunt bob. (Photo via MTV)

7. Gossip Girl: This one’s a total no-brainer, and the only thing that could rival Gossip Girl‘s amazing wardrobe would be the series finale plot twist. From Blair’s headbands to Serena’s ability to rock sequins with her school uniform, the show’s stylist Eric Daman really knew how to put together a killer look. We’re not worthy. (Photo via The CW)

8. Sex and the City: Where do you think Gossip Girl’s Eric Daman picked up his skills? From the legendary Pat Field on set for Sex and the City, of course. Our four favorite gals were always dressed to impress, thanks to her innovative and award-winning styling. Tulle tutus, Chanel statement necklaces and oversized flower pins — if you can name it, chances are one of the SATC girls has worn it. (Photo via HBO)

9. Ally McBeal: Two words: mini skirts. The ’90s were in full force for the majority of this show’s run, so this supermodel-approved look was everywhere, even fictional TV courtrooms. Ally’s irreverent attitude led to some chic takes on typical nine-to-five wear. (And we loved every second of it.) (Photo via Fox)

10. Friends: Rachel Green in overalls. Monica in mom jeans. Phoebe in a fuzzy orange coat. This show was squad fashion #goals. Every episode of this classic show is jam-packed with outfits we wish we had in our closets now. And if still loving these looks is wrong, well then we don’t want to be right. (Photo via NBC Universal)

11. Glee: Confession: We wish we had a Cheerios uniform of our own, not just for Halloween costumes but also just regular ole Thursdays when you need a bit of pep in your step. We love that each cast member had such a defined style during the series. Rachel’s adorkable outfits, Mr. Schuester’s vests and Finn’s “ambiguously sporty” tees were in constant rotation. (Photo via Fox)

12. Scandal: No matter how crazy Olivia Pope’s life gets, this fixer’s wardrobe is always on point. Between draped cardigans, Prada bags and impeccably cut trousers, Olivia Pope is a style maven. When in doubt, just add a glass of red. It’s the perfect accessory. (Photo via ABC)

13. Scream Queens: This modern whodunit may be all about a mysterious murder, but we have to admit the girls on this show are also *killing* the style game. Forget Vineyard Vines and Lily Pulitzers, these sorority girls are rockin’ Gucci, Valentino and Fendi. We have Emmy-winning stylist Lou Eyrich to thank for that. She was also the mastermind behind Glee. (Photo via Fox)

14. My So-Called Life: Heavy sigh for just one second while we sit here and reminisce about Jordan Catalano. Button-up floral dresses, flannel shirts and penny loafers — whoa, wait a minute, this sounds exactly like what’s in our current closets. The outfits in this teen drama definitely make our hearts skip a beat. (Photo via ABC)

15. Saved by the Bell: We’re so excited! We’re so scared! From the crop tops to the crimped hair, nothing says the ’90s like Saved by the Bell. Practically every ensemble featured in this after-school special was vibrant, bedazzled and totally off the wall — in the best way ever, of course. (Photo via NBC Universal)

16. Sabrina the Teenage Witch: You basically weren’t a ’90s girl if you didn’t have magazine rip-outs or posters on your bedroom walls of Melissa Joan Hart slaying it in a crushed velvet mini dress and platforms. Her outfits were pure 2000s magic and inspired many a trip to the mall. (Photo via ABC)

17. The Nanny: Let’s just say what needs to be said here: Fran Fine (aka the nanny of The Nanny) was way ahead of her time. Her coordinating mini skirt and blazer sets elevated the typical weekday ensembles, while her stunning sequin gowns were the life of every party. Not to mention, we would give anything to score one of Yetta Rosenburg’s sequin bomber jackets RN. (Photo via CBS)

18. Sister, Sister: If you’re getting ready in the morning and your outfit feels like it’s missing something, take a cue from this popular sitcom and just put a hat on. No show’s wardrobe department could rival the hat collection of Tia and Tamera Mowry, after all. Sister, Sister took twinning to the next level with just-mis-matched-enough ensembles. (Photo via ABC)

19. Lizzie McGuire: Nothing inspired a shopping trip to Limited Too quite like an episode of Lizzie McGuire. While her best accessory might’ve been the cartoon alter ego on the bottom right-hand corner of the screen, we think her rhinestone headbands, platform Sketchers and cropped flares could’ve been a close second. (Photo via The Disney Channel)

20. The Good Wife: Now there’s a woman who knew the power of a pencil skirt. Saint Alicia always looked heavenly in her signature blazer and bodycon silhouettes. Because honestly, nothing makes you feel like a total #girlboss than putting on something that’s perfectly tailored. Never too fussy or over the top, all of Alicia’s looks were understated and chic. (Photo via CBS)

21. So Little Time: Nowadays, the Olsen twins are off creating minimalist chic pieces for their own lines. But little did we know, this ABC Family sitcom would be one of our last few chances to view Mary-Kate and Ashley Olsen’s designer creations. On set, shrunken cardigans, cargo pants and clogs reigned supreme. Not to mention, this show is basically the reason why we begged our moms to let us get highlights. (Photo via ABC)

23. Jane the Virgin: Okay, so the awful Marbella waitress uniform aside, this show actually takes a refreshingly realistic approach to wardrobe. We may not “ooh and ahh” over the breezy sundresses or “fancy” shorts, but we can appreciate these are items we’re more likely to find in our own closets. As if you needed more proof that Jane Villanueva is 100% relatable. (Photo via The CW)

24. The Mindy Project: Costume designer Salvador Perez is the mastermind behind Mindy’s bold ensembles that always pack a punch. And that’s not an easy task. With nearly 15 costume changes per episode, he still manages to outdo himself with each look and prove that Mindy looks radiant in literally every color under the sun. (Photo via Fox)

25. The Carrie Diaries: RIP The Carrie Diaries, you left us too soon. The premier stylist for teen dramas, Eric Daman created a wardrobe unicorn by blending the aesthetics of Sex and the City and Gossip Girl to create truly unique and totally fun outfits for every character on this show. Not to mention, the show is set in the ’80s, so the prom dress scenes are out of control. (Photo via The CW)