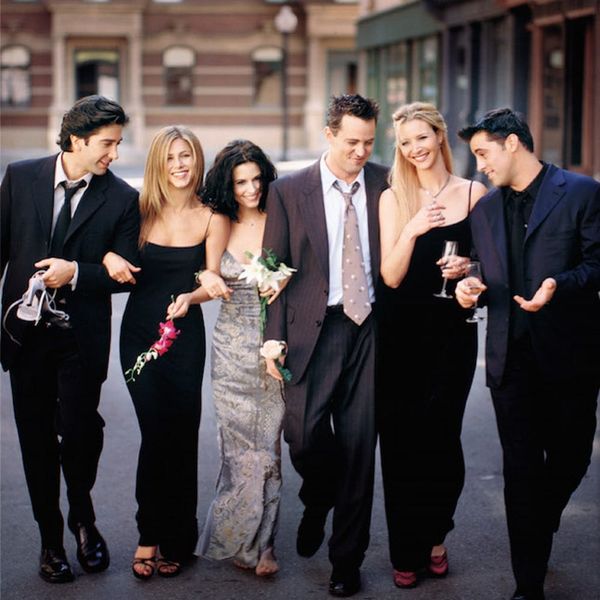 We definitely lost the first days of 2015 to Netflix and the inevitable Friends binge that came immediately after waking up with our NYE hangover. We’re not ashamed. It might have been the greatest start to any new year yet. But what is it about Friends that sucks all of us 20- and 30-somethings in for hours at a time, whether it’s on demand with Netflix or against our will (thanks syndication)?

Likely, it’s the lovable characters and the shenanigans they find themselves in, but could it also be the nostalgia? Maybe it’s the idea that the ’90s and early 2000s were a simpler time, filled with landlines, VCRs and mixed tapes. It was a time when you met with your friends at your go-to coffee shop to hear about the drama in their lives… because there was no GChat. It was a time when Ross could get stranded at a rest stop while everyone else went on a ski trip because cell phones weren’t a thing.

There’s no end to the debacles our favorite friends found themselves in that wouldn’t be possible with today’s technology. In fact, how boring would the show have been if everyone just texted each other? Actually, now that we think of it, Tinder might have made the show pretty interesting.

Nerdist took it upon themselves to reboot the classic with a modern twist. Think of this episode as “The One When We Realized How Old We Are.”

PS. The twins who played the part of Emma are 12 now. Feeling depressed yet?

Would you watch a reboot of Friends set in 2015? Let us know in the comments!

Amanda DiGiondomenico
Amanda is a freelance writer and graphic designer who blogs about living a stylishly nerdy life at The Spendicate. A lifelong resident of Baltimore, MD, Amanda is an art school dropout, who managed to earn a masters degree in nonfiction writing. On the weekends, she's an expert guacamole maker, a novice jogger and an intermediate yogini.
Netflix
TV
Netflix
More From TV