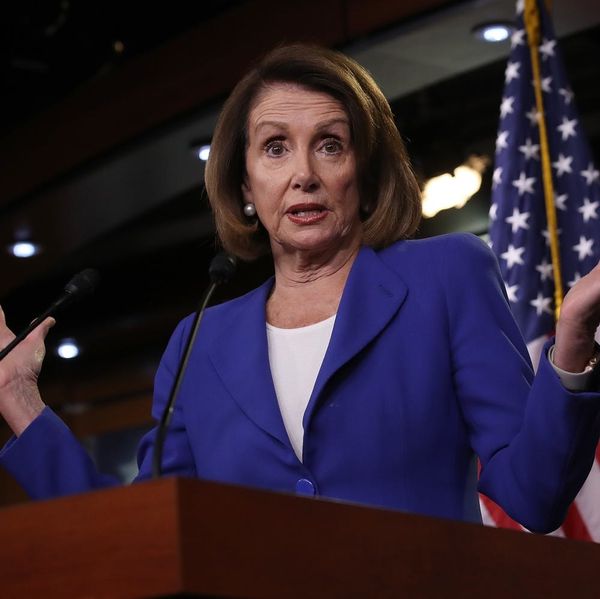 During her weekly press conference on Thursday, January 31, Speaker of the House Nancy Pelosi told reporters that new spending legislation being tabled by House Democrats would contain no provision for President Trump’s border wall. The announcement provoked furor from Republicans and was generally regarded by Democrats as a hardball victory. But Pelosi’s move could be part of a longer game that doesn’t totally line up with reactions from either side of the aisle.

“There’s not going to be any wall money in the legislation,” Pelosi said, adding that if Republicans have suggestions about adding more ports of entry or law enforcement technologies along the southern US border, those kinds of features could be negotiated instead.

Pelosi is part of a 17-member bipartisan, bicameral conference committee whose goal it is to reach consensus on funding before February 15 to ensure that another shutdown doesn’t happen. While her statements echo those of her fellow conference committee caucus members who hope to avoid another shutdown, her rhetoric is worth paying attention to. Pelosi insisted there would be no “wall money legislation” on the spending bill but left open the possibility of funding wall-like barriers, like additional fencing.

“If the president wants to call that a wall, he can call it a wall,” Pelosi said during the briefing.

Pelosi’s ability to manage the expectations of opponents while seemingly defending the demands of her party is a tactic the long-serving Democrat is quite adept at — and is, in fact, something she likely learned to do early in her career.

Even before she joined Congress, Pelosi had gained access to Democratic insiders who held a lot of sway in Washington, including her mentor, California Rep. Phil Burton, who’s considered a powerful deal broker in elite Democratic circles. In Burton’s two-decade congressional career, he became known as a shrewd “deal maker” whose powers of persuasion could get GOP members onside. According to Burton’s New York Times obituary, “When a House vote approached on an issue that had his interest, he worked the House floor for votes like a bird dog nosing out quail.”

Pelosi, who FiveThirtyEight describes as a “near-universally acknowledged master of the legislative process,” operates in much the same way as her onetime mentor and friend. And, at least now, it would appear that Pelosi and her fellow conference committee members are more concerned with passing funding legislation than preventing something like a wall from being funded and built.

While Pelosi says there’s no money for a wall, her committee members feel hopeful that a “border barrier” could take its place. For President Trump and others in the GOP, though, Pelosi’s statements are proof of a partisan refusal to negotiate. During a meeting with American manufacturers after Pelosi’s press conference, Trump boasted that soon enough, Pelosi will “be begging for a wall.”