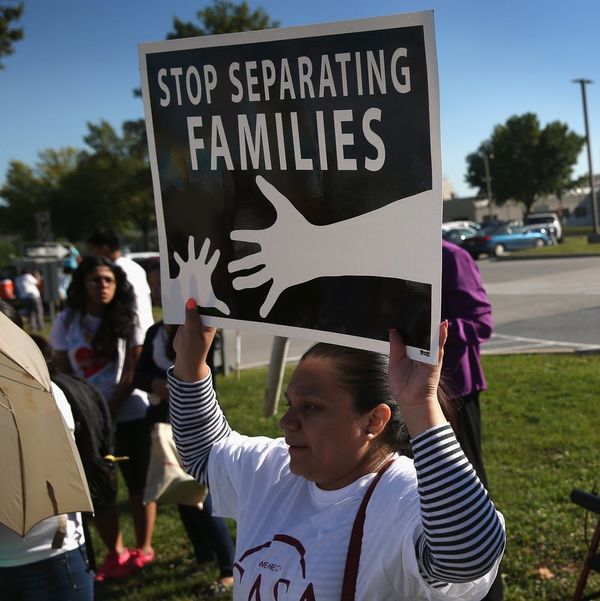 Protests unfolded in Washington DC and across the US on Thursday, June 14, in response to Trump administration’s controversial practice of separating parents from their children — some as young as infants — when caught attempting to illegally cross the Mexico-US border. The protests have been organized by Families Belong Together, a group speedily created to help stop the detention of children apart from their arrested migrant parents, and documented using the hashtag #FamiliesBelongTogether.

The Trump administration announced in May that parents caught “smuggling a child” over the US border would be prosecuted and separated from their children “as required by law.” Since then, there have been numerous upsetting reports of what the policy can look like in practice. One mother claimed her child was ripped from her arms while she was nursing, only to be put in handcuffs when she protested; in another instance, a father died by suicide while in detention after his three-year-old son was taken from him and his wife at the border.

The rallies are intended to show the Trump administration that in general, US citizens don’t agree with separating minors from their parents, urging that this practice is overturned immediately.

Among the thousands of Americans supporting protesters are celebs like Lin-Manuel Miranda, Chance the Rapper, Alyssa Milano and Sara Barielles, who tweeted, “I am so sad and feel so helpless about the families being separated. This is beyond inhumane…I am just appalled. I am grateful for those sharing how to engage and help, thank God for you. The idea that there is anyone who believes this is justice is simply heartbreaking.”

1) Call your reps at (202) 224-3121- tell them to END the separation of families at the border (ask your Senators to pass the Keep Families Together Act and your House Rep to pass the HELP Separated Children Act).

If you couldn’t make a rally today, and want to end the separation of children from their parents, you can still participate and get your voice heard. Talk show host and comedian Jimmy Kimmel tweeted today that it’s not too late to call your local representative and tell them to demand an end to parent-child separations at the US border, as well as calling your state senators to pass the Keep Families Together Act.

“The United States must not be a country that traumatizes young children by separating them from their parents. Young children have been taken from their parents’ arms and federal law enforcement hasn’t given parents even the most basic information about their children’s whereabouts,” Senator Diane Feinstein said when announcing the Keep Families Together Act along with the Democratic caucus. “Congress has a moral obligation to take a stand and say that families should not be forcibly separated.”

“Many of these families are fleeing terrible violence, traveling thousands of miles on foot for the chance to file an asylum claim and save their lives. To traumatize them further is unconscionable, and I hope that our Republican colleagues will work with us to put an end to this immoral policy.”

Kat Armstrong
Kat has been a writer, social media maven and mom for longer than she's willing to admit. She's also spent time in front of and behind the camera, interviewing celebs, politicians and acting as a producer for fashion and artistic photography shoots. When she isn't writing for various orgs and publications, she's hanging with her kids, husband and French Bulldog, Peter, in Toronto, Canada.
Immigration
Current Events
Immigration
More From Current Events