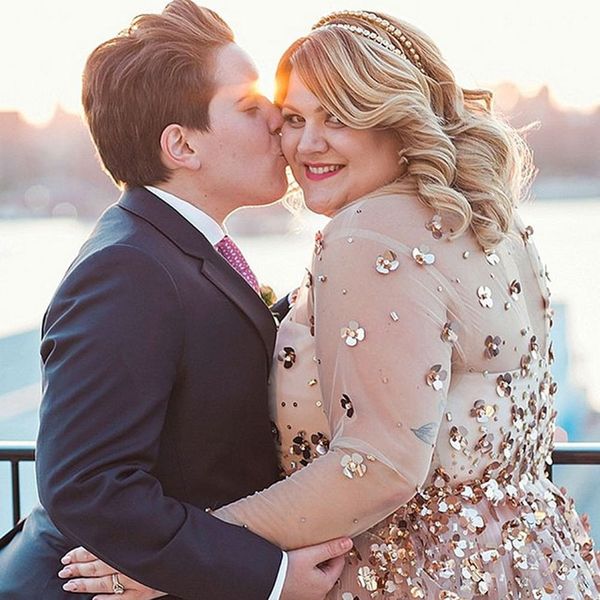 Since the small but mighty designer Christian Siriano made his debut on Project Runway, he’s gone from taking Tim Gunn’s advice to dressing some of the biggest names in Hollywood. You may have recently spotted his work on Kelly Osbourne at the Grammys or on Solange Knowles at the Oscars. And while the designer’s pieces always stun, he has yet to delve into the plus size world — until now.

Siriano recently created a gorgeous custom wedding gown for his friend and well-known plus-size fashion blogger, Nicolette Mason (you might recognize her from Target’s AVA + VIV lookbook). Mason’s dress was every bit as glamorous as you’d expect it to be. There are actually so many awesome elements to her dress we’re not quite sure where to start. The sheer, custom creation offered up long sleeves, a sweetheart neckline and most noticeably, a generous helping of beaded, rose gold paillette flowers. The glowing bride completed her look with soft curls and a glittering headband.

The rest of Nicolette and her partner Ali Talan’s wedding looked just as gorgeous at that designer dress. In a blog post about her big day, Nicolette shares that the two said their “I do’s” in the Wythe Hotel in Brooklyn under a gorgeous, floral-covered Chuppah (a traditional Jewish wedding canopy) designed by Sprout Brooklyn. Ali wore a sleek, bespoke suit by Bindle & Keep and naturally, the picture-perfect ceremony also had a photo booth and an impeccable view of Manhattan’s skyline.

We know Mason’s dress was a custom creation, but here’s to hoping that the internet’s positive response to the gown will spark some sort of fashion collaboration between the Mason and Siriano in the very near future (like, tomorrow maybe).

Cortney Clift
Cortney is the senior writer and special projects editor at Brit + Co. She typically covers topics related to women's issues, politics, and lifestyle. When she's not buried behind her computer you'll find her exploring New York City or planning her next big adventure.
Plus Size
Wedding Style
Plus Size