Your Guide to the 2015 Grammys Red Carpet 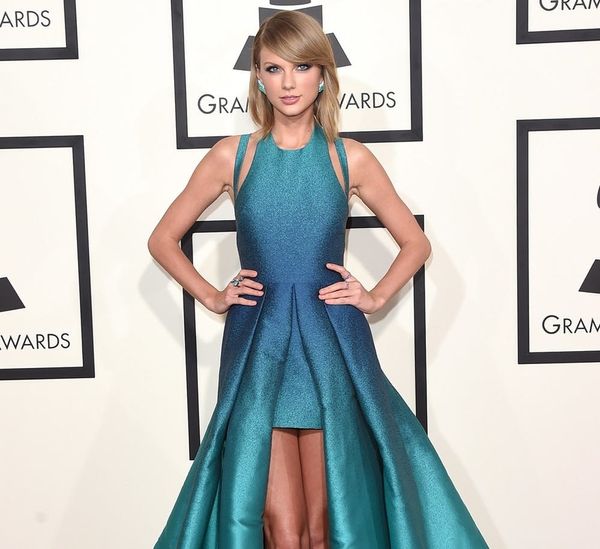 While the Oscars are usually focused on ultra elegant looks, the Grammys are typically an affair where folks are much more open to taking fashion risks. After all, what else would you expect when Rihanna and Lady Gaga are both in attendance. However, this year the red carpet fashion seemed to shy away from theatrics. Black, white and silver were undoubtedly the most popular colors, with more vibrant shades of blue showing up on Iggy Azalea and Taylor Swift. Even Miley Cyrus, who’s usually never one to shy away from making a statement, showed up in a sleek black gown with side cut-outs. The fashion was certainly more conservative this year than it has been in the past, but we were anything but bored. Here are some looks we’ll be drooling over for the next few weeks.

1. Kelly Osborne: We’re guessing the rest of the fashion police team are going to give this curve-hugging, polka-dotted number two giant thumbs up. And can we just talk about that puffer fish clutch for a second? (image via Jason Merritt/Getty)

2. Kim Kardashian: Where do we even begin? Everything from the new lob to the ultra (and we mean ultra) glam dress is so very well… Kim Kardashian.

4. Madonna: Sorry, Madonna is how old? You’d never know it by the looks of this number. She takes us back to her “Like a Virgin” days in this edgy, figure-hugging leotard. (image via Jason Merritt/Getty)

5. Charlie XCX: We’re getting some Dumb and Dumber vibes from Charlie XCX’s white tuxedo, but we mean that in the best way possible. If anyone’s going to rock a pink bowtie and furry shawl it’s going to be her. (image via Larry Busacca/Getty)

7. HAIM: Well folks, it looks like it’s official, HAIM is kind of the coolest sister band ever. The trio, who recently returned from a trip the Hawaii with Taylor Swift, are looking cool as ever in sleek black and white outfits. (image via Larry Busacca/Getty)

10. Sia and Maddie Ziegler: Sia brought along 12-year-old Maddie Zeigler, the lead dancer in her much chatted about music video “Chandelier” to this year’s Grammys, and turned heads in matching suits + oversized wigs, of course. (image via Larry Busacca/Getty)

11. Katy Perry: After performing at last weekend’s Super Bowl, we think it’s safe to say that Katy Perry is having a pretty epic couple of weeks. Surprisingly, she kept her ensemble on the tame side this year in a crystal dress and curled lavender locks. (image via Jason Merritt/Getty)

12. Kat Graham: If you had any doubt that long sleeves could be sexy, Vampire Diaries star Kat Graham’s black and white stunning ball gown should quickly wash away any and all apprehensions. (image via Jason Merritt/Getty)

14. Taylor Swift: Amongst a sea of black and white, T. Swift shined in this epic blue gown. (image via Jason Merritt)

16. Beyoncé: Bey kept things clean and classy and showed off those trademark curves in this black embellished gown. (via Jason Merritt)

17. Miley Cyrus: Is 2015 the year of the new Miley? The pop star left all of her Lisa Frank-inspired outfits at home and debuted a totally grown-up look in this minimal black gown and slicked back hair. (image via Larry Busacca/Getty)

18. Lady Gaga: No meat dress here. Lady Gaga ditched the theatrics and instead is looking kind of like the coolest mermaid ever. (via Jason Merritt/Getty)

19. Iggy Azalea: Well it looks like if you’re not down for black or white, the color to wear to the 2015 Grammys is definitely blue. Iggy rocked the red carpet in this cut-out dress complete with an epic braided crown. (via Jason Merritt/Getty)

20. Jennifer Hudson: Jennifer took it back to the ’90s in this white tube top dress, crystal choker and strappy heels. (via Jason Merritt/Getty)

21. Rihanna: Whoa. We sure hope she has two seats for that dress. (via Jason Merritt/Getty)

23. Elton Castee: We’ve grown accustomed to spotting shorts on the red carpet, but striped leg hair? Not so much. Looks like Vine star Elton Castee may have just spearheaded a whole new trend. (image via Larry Busacca/Getty)

What was your favorite look of the night? Share with us in the comments below.