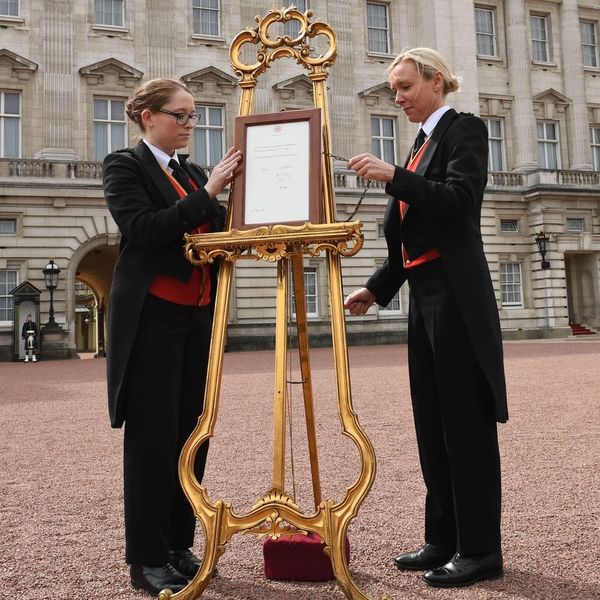 Shortly following the announcement that Prince William and Duchess Kate Middleton welcomed their third child, a son, on Monday morning, royal officials posted a public notice inside the Kensington Palace gates. “Her Royal Highness The Duchess of Cambridge was safely delivered of a son at 11:01am today,” the notice read. “Her Royal Highness and her child are both doing well.”

A notice has been placed on the forecourt of Buckingham Palace following the announcement of the birth of The Duke and Duchess of Cambridge's third child.@KensingtonRoyal pic.twitter.com/82ZCB7F2aQ

A large crowd gathered outside the palace gates to watch the official announcement be placed on its easel. “It is tradition that a framed notice of birth goes on display on a ceremonial easel on the forecourt at the Palace,” the Royal Family said in a statement. “The notice will be on display for approximately 24 hours. When it is taken down, it is sent to the Privy Council Office so that the details of may be recorded in the Privy Council records.”

A large Union Flag has been raised over Buckingham Palace and a State Standard over Windsor Castle to mark the birth of The Duke and Duchess of Cambridge's third child. pic.twitter.com/hcYYluf2fF

Additionally, a large Union Flag was also raised over Buckingham Palace, and a State Standard flag has been raised over Windsor Castle to mark the birth of the couple’s third child, the fifth in line to the throne.

The baby, whose name has not been announced, was born weighing 8lbs 7oz, and joins big brother George, 4, and sister Charlotte, 2. So far, the royal family hasn’t made any official comment on the new addition, but Queen Elizabeth, the Duke of Edinburgh, the Prince of Wales, the Duchess of Cornwall, Prince Harry, and members of both families are said to be delighted with the news.

The arrival of the newest addition is the latest in a month of royal celebrations. The queen celebrated her 92nd birthday on Saturday, April 21. The Duke and Duchess of Cambridge will celebrate their seventh wedding anniversary on April 29. And Prince Harry and Meghan Markle will wed on May 19.

Would you make your way to Buckingham Palace if you were in the UK? Let us know @BritandCo!