Laurie Hernandez Wants to Be This Disney Character for Halloween 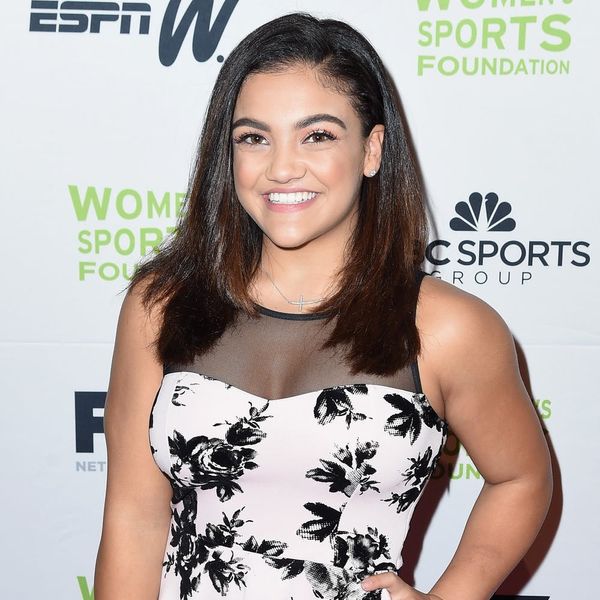 With less than 10 days to go before Halloween, we’ve already begun to see some pretty stellar celebrity costumes. (Highlights include Channing Tatum as a purple unicorn at his daughter’s Halloween bash at school, and Alicia Silverstone as her Clueless character, Cher Horowitz.) Olympic gymnast Laurie Hernandez is plotting her costume too, and she’s leaning toward a very popular Disney character.

“I’m really looking forward to possibly being Moana,” the athlete told Brit + Co over the phone. “I think that would be pretty adorable.”

Hernandez and Moana actually have a few things in common. Like the Disney heroine, Hernandez rose to great heights at a very young age. When she was 16 years old, she became the first US-born Latina to make the US Women’s Gymnastics Olympic team in more than 30 years, despite several 2014 injuries that left her with a fractured wrist and a dislocated kneecap.

Since then, she’s aced every challenge placed before her. The youngest member of the so-called “Final Five,” she won a silver medal in the individual balance beam event and also famously helped Team USA take home Olympic gold. “We have a little group chat we text in,” she shared of her former teammates, who she says are like “sisters” to each other. “It’s very sweet.”

After her Olympic heroics, the gymnast wowed us all by dancing her way to the top spot on Dancing With the Stars and taking home the coveted Mirrorball alongside partner Valentin Chmerkovskiy. But don’t ask her which was harder to train for. “They’re both very different,” she told us. “The Olympics [are] physically really strenuous, [but it’s like], I’ve trained this routine, now I just have to compete it once.” With dancing, “it’s like [there’s] one week to learn a new dance you’ve never tried in your life. [It’s] very stressful and extremely exhilarating.”

Now she’s rooting for her former partner to bring home the trophy once more. “I’m really rooting for [Valentin] and Victoria [Arlen],” she said of the season 25 competition. “Just because Victoria is such a sweet girl [and] Valentin is like a brother to me. We keep in contact.”

If, for some reason, the gold medal and Mirrorball trophy don’t impress you, by the way, you should also know that Hernandez became a New York Times, Wall Street Journal, and USA Today bestselling author earlier this year with the release of her autobiography, I Got This: To Gold and Beyond ($14).

Which leaves us wondering: What’s left?

High school, for one thing. The gold medalist has one year left to complete. There’s also the matter of getting that pesky driver’s license out of the way (“That’s a little tricky,” Hernandez says with a laugh) and training for the 2020 Olympic Games in Tokyo.

She has plenty to keep her busy in the meantime too. The dancing queen, who is of Puerto Rican descent, has been hard at work raising funds for the Hispanic Federation in the wake of Hurricane Maria, which devastated Puerto Rico earlier this month.

“That definitely has my heart,” she told us. “Everyone really needs to come together… It’s not right to sit on the side and do nothing. It’s important for us to spread that word.”

It’s not the only word she’s spreading, though. The activist has partnered with the American Egg Board for Hispanic Heritage Month to help shed light on the importance of high-protein foods (like eggs), particularly for young kids.

this photo is totally random i know. but like, no make up, crazy hair, sweatshirts, and brunch are things that just make my soul happy and warm. what makes you happy?

It’s a topic she knows plenty about — while training for the Olympics, clean eating was a must, which meant meat, veggies, and — you guessed it! — eggs. “The brunt of my cooking is scrambled eggs,” she admitted. In fact, she said it was the one dish her mom taught her how to make before she left for Rio.

Still, she does have a sweet tooth: “I’m definitely [a sucker for] cookies,” she told us. Girl, aren’t we all!

What’s your Halloween costume this year? Tell us @BritandCo.

Nicole Briese
Nicole is the weekend editor for Brit + Co who loves bringing you all the latest buzz. When she's not busy typing away into the wee hours, you can usually find her canoodling with her fur babies, rooting around in a bookstore, or rocking out at a concert of some sort (Guns N' Roses forever!). Check out all her latest musings and past work at nicolebjean.com.
Celebrities
Celebrity News
Celebrities Halloween Halloween Costumes
More From Celebrity News